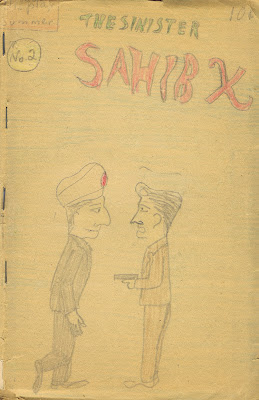 (One of my first comic characters:the evil villain Sahib X.) 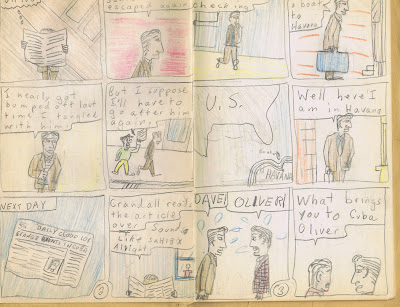 When I was a kid I always had stacks of comics to read. They were all types: funny animal, western, horror, Archie, Batman and Superman and my personal favorites, Classics Illustrated. I was probably the only kid on the block who didn't have TV, so along with the occasional Friday night movie, they were my source of visual entertainment. While I was also a fan of the Sunday funnies, they were always vignettes that left me waiting, while the comicbooks were complete stories. 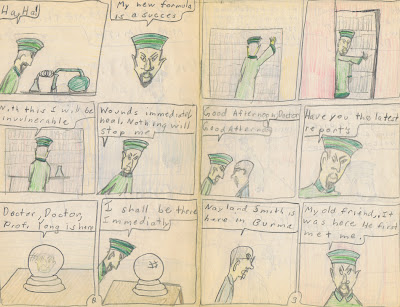 (Another famous villain that fascinated me, and still does, Dr. Fu Manchu.)
From the time I learned to read, I wanted to become a writer.. My earliest creation was something called the XX Patrol. In those days we had these oversized winter coats that were belted, and the buckle was two interlocking X pieces- so as soon as I donned my uniform and clasped that belt together I was an officer in the XX Patrol. My stories were more a way to create a doorway to my fantasy life than anything else; I wasn't interested in having anyone else read them.In fact I can remember being furious when my older brother found one of my stories and read it out loud to the family. His motivation in this was probably just sibling harrassment ;my family was impressed, but I was certainly outraged and mortified. 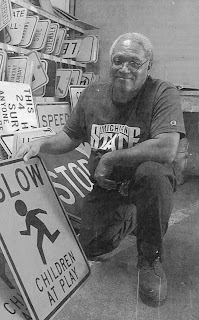 (Fred Jackson III from a newspaper photo a couple of years back.)
When I was in sixth grade I met Fred Jackson, who astounded me by showing me the homemade comics he had created. I liked to draw a bit, but it had never occurred to me to put words and pictures together in my own comics. Fred was definitely management material. We soon had our own company, Vokson, and a number of titles that we created and traded back and forth to read. Fred's Cool Calm and Crazy and my Dumb Drastic Demorilizer were both Mad parodies. His action stories were Smollett Jones (using the Sherlock Holmes "o-e" homage) and Jetman (with the son of Fu Manchu) and mine was The Purple Plum (a beatnik  expresso house -the concept was Maynard Krebbs  meets 77 Sunset Strip) .Another title wasVokson Presents, where I did pastiches of my favorite books- one I remember clearly was The Cursed: Sherlock Holmes,Van Helsing and Nayland Smith team up against Dr. Fu Manchu who has created a super-villains group of the Wolfman, the Mummy and Dracula. Wait a minute...was I anticipating the League of Extraordinary Gentlemen? 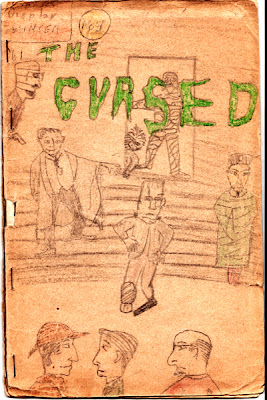 (If only I'd sent this comic to Hollywood sooner!)
For the comics we usually took a piece of typewriter paper and folded it in half, and drew and both sides, giving us four pages for each sheet. The stories were drawn in pencil. We'd either cut the sheets in half and staple them together, or open up the stapler and lay it flat to put two staples in the center of the page. My innovation was adding a construction paper cover to a lot of the books, and using different color ballpoint pens for some of the work. Fred's work was infinitely more advanced than mine. I used to call them my 2-minute comics....meaning I tried not to spend more than two minutes on any page. I was far more interested in story and continuity than in drawing pretty pictures. On a side note I still use the same approach when I'm working on comic stories to this day: I use a sheet a typewriter paper, divide it in half and lay out two pages on each sheet. However these days I don't try to draw on both sides of the paper...and now my deadline is 3-4 minutes a page. 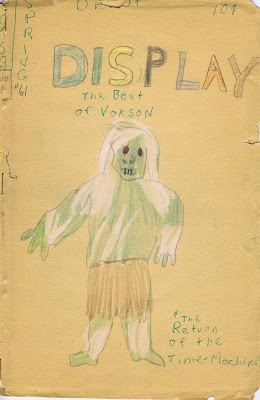 (One of my favorite movies was George Pal's The Time Machine . I did my own sequel.) 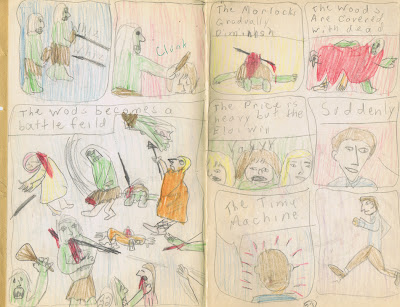 (Fred wound up drawing the big battle panel on the left hand page. I couldn't handle
that many figures in a frame.) 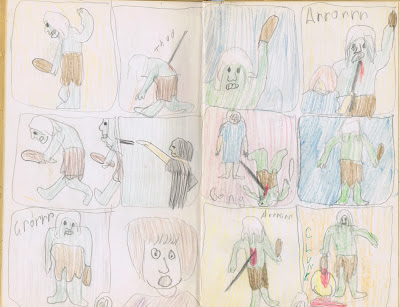 Looking back on those comics I found that what I was really experimenting with was continuity. I knew so little about drawing that I rarely attempted to make an interesting picture or illustration  in any frame. What I was beginning to understand was what I should show in each frame and how it was connected to the preceding and following one. I was discovering how to "write" with pictures. And I found that telling stories with pictures was a lot more attractive to me that just using words. 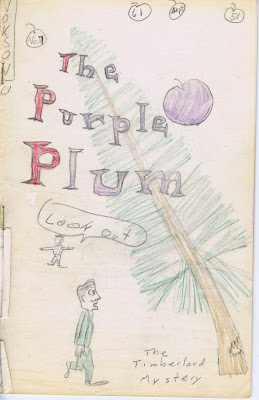 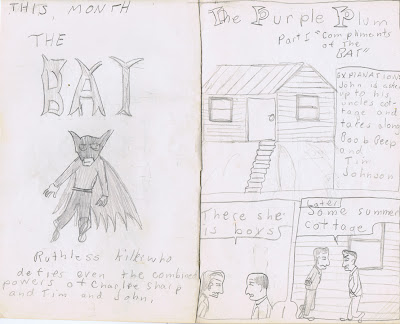 ( When you look at these early drawings, you realize that if there was hope
for this kid, there's hope for anyone in the field of art.)
Fred and I worked together on Vokson during the 7th and 8th grades. Somewhere along the line I started to abandon my two-minute deadline and actually started to improve the drawing. I was starting to pay more attention to what my favorite cartoonists were doing in the comics world and emulating them. Joe Kubert and Leonard Starr were my two main inspirations so I was looking a lot at what they did. My favorite comics were the ACG line, which published a lot of mystery type books and most of there artists had realistic styles.  At some point I stopped trying to turn out "issues" and instead was trying shorter stories where I put a lot more work into the drawing of each page, often inking the drawings with a ballpoint pen in and adding some colored pencil to them. 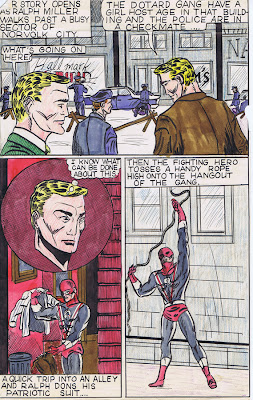 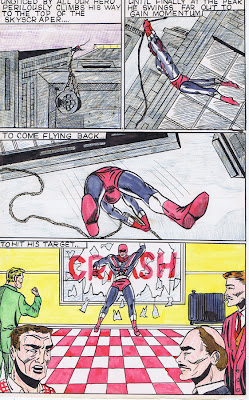 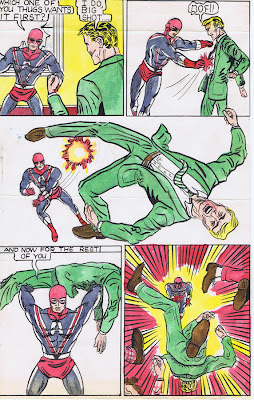 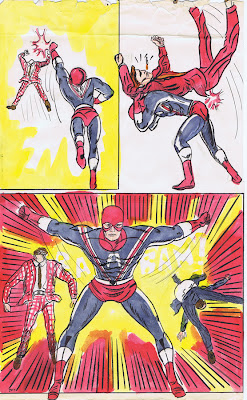 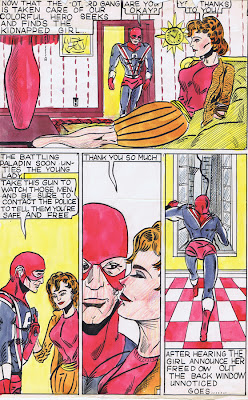 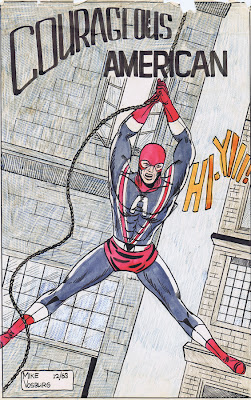 (I loved Jack Kirby's Fighting American strip when I saw it. It was just so FUN!)
Without Fred's friendship and common interest in the creation of comics I'm sure I never would have followed the path that led me to making a living as an illustrator. For that I'll always be grateful to him. While Vokson hasn't published anything new in the past 50 years, Fred and I still keep in touch. Fred continued to do cartoons, and for years sold his gag strips to magazines. Coincidentally, Fred's current passion is creating crossword puzzles, and one of his clients is the LA Times, a puzzle that I work on every morning.

(Proof of the debilitating nature of cartooning. On the left, me at 13 when I just
started drawing comics. On the right three years later.)
With the onset of what's called "The Silver Age" of comics, a Detroit area university professor named Jerry Bails, had a letter in one of the DC comics telling of an amateur publication he had created called Alter-Ego. Now there was direct link between the people who created comics and the fans who read them. I was a freshman in high school and I can remember getting copies of Alter Ego and On the Drawing Board, a newsletter about comic book news; a whole new world opened for me.

Once I entered the world of fanzines, I learned about editing...and that started with my own work. With my homemade comics I never changed a thing...and rarely used an eraser. . What I understood from the beginning with publishing a fanzine was that whatever I produced was going to be seen and commented on by the public. I didn't want to embarrass myself with my work. 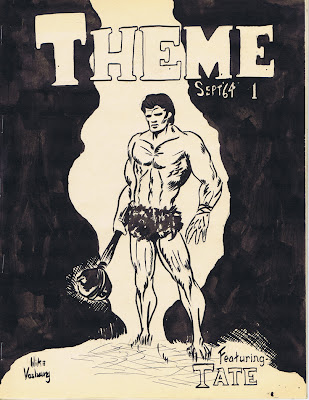 Thursday: Jumping from homemade comics to fanzines! Be there!
Posted by Voz at 6:00 PM