Tales4-Counting Coup at the Crypt 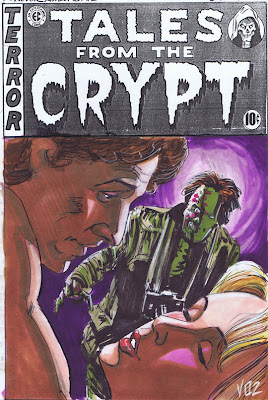 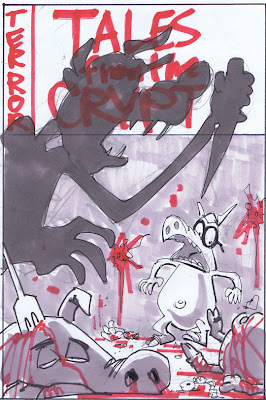 Growing up in the midwest the two sources I had for dramatic entertainment were either the mysterious costumed religious rites on Catholic holy days, which had an emotional appeal that was tough to match,  or the movies. The latter couldn't always compete with God, but there certainly was a world of magic in those darkened theaters. One of the great perks of working on Tales was that I got to meet and photograph so many actors and directors.

Amanda Plummer and Lea Thompson were two of the first actresses I met, and I was astounded how quickly they merged into their characters when I approached them for photos. Brooke Shields had a bone-crushing handshake. Vanity started to pose the minute she saw a camera. 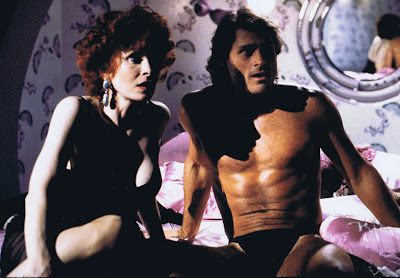 (Anita Morris above and Rita Wilson below.) 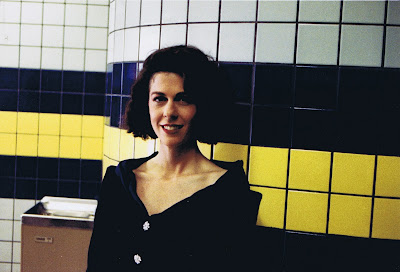 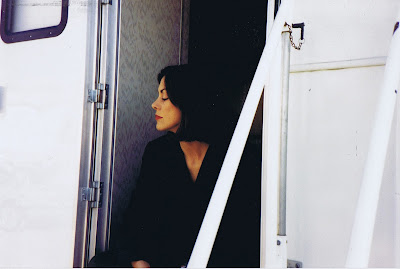 (The very witty Wendy Malick above and Isobella Rosselini below.) 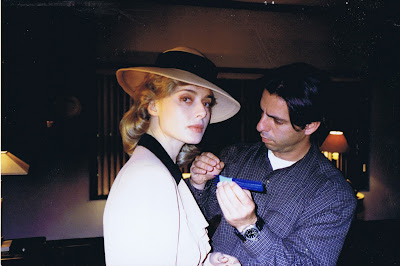 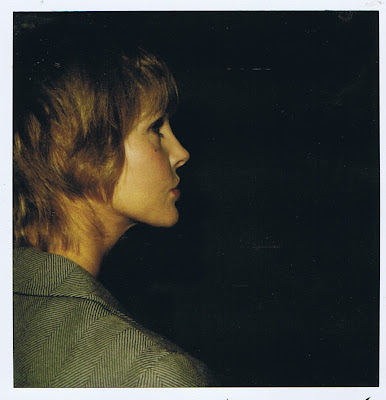 (Priscilla Presley above and Lysette Anthony below.) 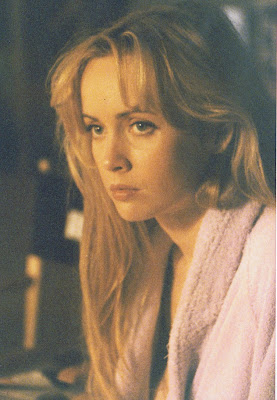 And beautiful women- there was Vivian Wu, who later did The Pillow Book. Anita Morris was amazingly stunning as was Lysette Anthony. Wendy Malick was not only beautiful, but had a
great sense of humor ("Sure, take my picture for whatever disgusting thing you have in mind.")  Priscilla Presley looked truly frightened when I walked toward her on the set, until I explained who I was and what I was doing. Isobella Rosselini made it impossible to take a bad photo. And then there was the lovely dark haired Rita Wilson, whom I later learned was Mrs. Tom Hanks. 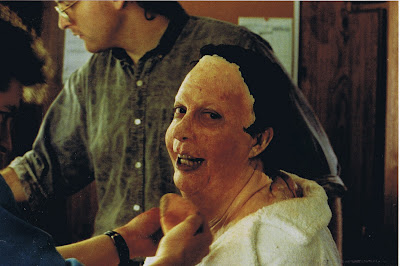 (Tim Curry above and Roger Daltrey below.) 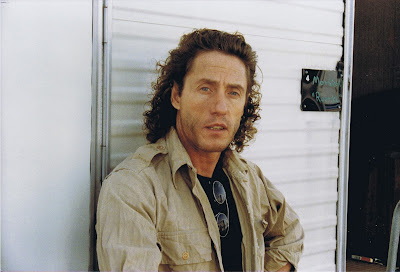 There were musicians. I was a big hit with my niece when I sent her the picture of Adam Ant and another one of Slash from Guns'n'Roses. I was pretty impressed with getting to take some shots of Roger Daltrey of the Who. (On the same episode, I also met a newcomer named Steve Buscemi.) While he's not as famous for his singing, I got to meet Frankenfurter himself, Tim Curry, in a very creepy makeup. 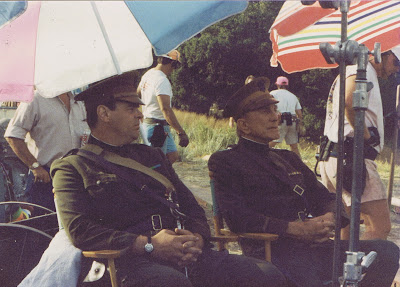 (Dan Ackroyd and Kirk Douglas/)
When I told the same niece that Kirk Douglas, a REAL movie star, was in this week's show, she asked, "Is that, like, Michael Douglas's father?" Kids...That episode, directed by Robert Zemekis, also featured  Dan Ackroyd, who constantly seemed to be jumping in his jeep to drive off with other crew members to a nearby hill for a smoke. Another SNL alumni was Jon Lovitz, who asked me, "Who died and made him director?", after getting some advice from the director. His co-star was John Astin, who went to college with my father-in-law. John was quite surprised to hear how well my wife Annie's dad had succeeded. 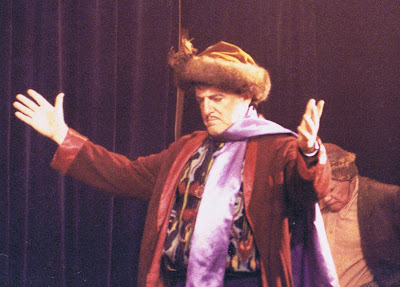 (John Astin above and Stephen Webber hamming it up below.) 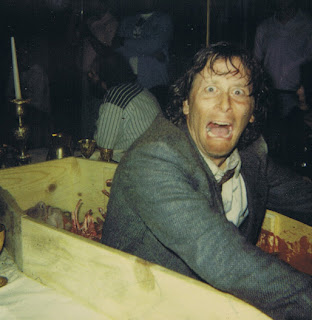 Isaac Hayes told me to draw him with hair. When I told Cheech Marin he was funny, he replied, "Then give me a dollar."  I still tried to convince Sam Waterson that he had starred as Simon Wiesenthal, even after he told me hadn't. (Yes, it was Ben Kingsley in that role.) He
avoided me the rest of the day. Martin Sheen signed my Bob Peak Apocalypse Now poster, and Billy Zane a copy of Orlando for my friend Zahra. I found out that Stephen Weber was a fan of Bernie Wrightson's.  Ben Cross was despondent that he hadn't made a great film since Chariots of Fire. Kyle MacLachlan, on his directorial episode, signed the Tales cover I did from the show he had been cast in earlier, which featured the buzzard pulling out his eye. 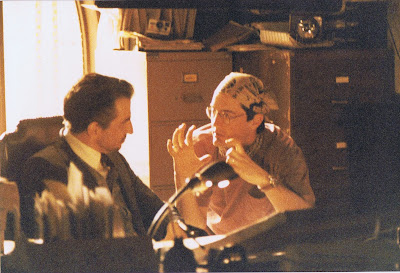 (Sam Waterson and Kyle MacLachlan  above and Cheech Marin below.) 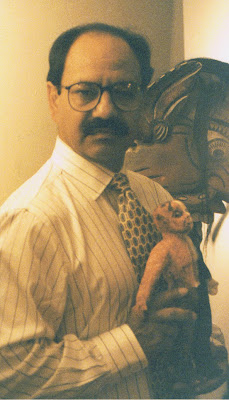 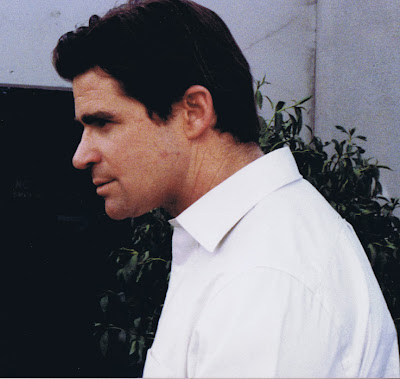 (Treat Williams above and Kevin McCarthy below.) 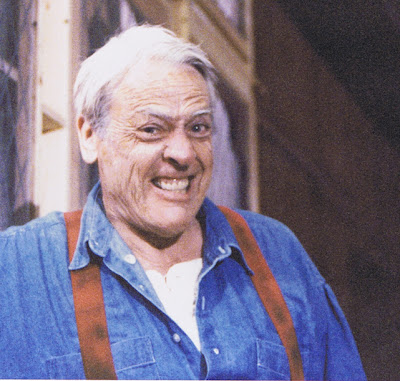 Tim Roth was scary, but  Malcolm McDowell  made me feel too intimidated even to approach him.  Sugar Ray Leonard just asked me if he looked completely silly in his costume. I lied. Treat Williams gave me a great cover idea; not bad for an actor. I fell in love with Whoopie Goldberg, even before I found out she was a comics fan. I agreed to trade watercolors with John Lithgow; he still owes me his. Twiggy Lawson was an icon from when I was a teenager. Kevin McCarthy seemed to have great delight in mugging for me. 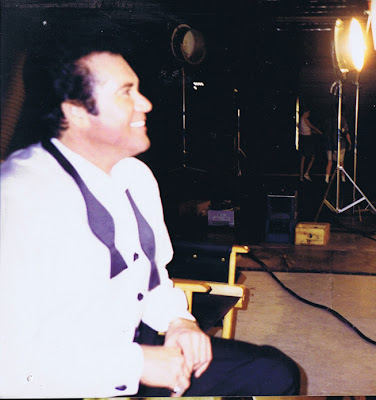 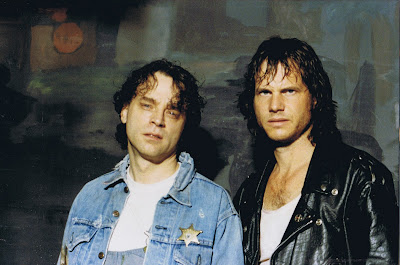 (Wayne Newton above and Bill Paxton and Brad Douriff below.)
One of my favorites was Bill Paxton, who spent a lot of time talking about his upcoming roll in Tombstone. I recommended the Loren Estleman book on the subject. I told Wayne Newton my wife was a big fan. Later in the day his bodyguard walks up with a camera, takes me over to Wayne, and has me pose for a picture with him. When Mr. Newton left the set for the day, he greeted me by name, as well as lots of other crew members. He really charmed everyone. 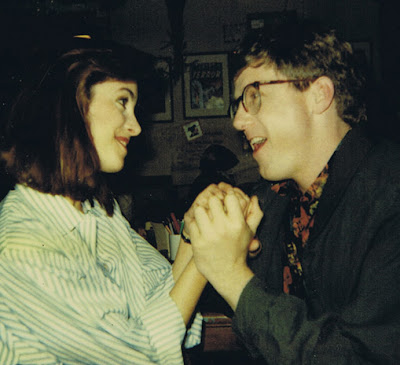 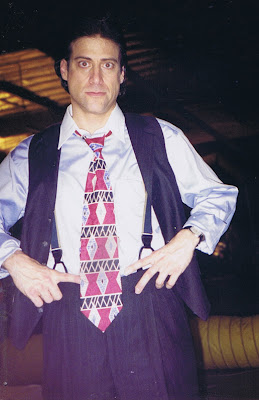 (Cynthia Gibb and Harry Anderson above and Richard Lewis below.)
And of course, there were my "fellow actors", whom I did cameo appearances with. I was Harry Anderson's hand double in "Korman's Calamities." I kidded him that it was a good thing he was also left-handed or they might have had to replace him. I had also met Harry when he visited Howard Chaykin's studio a couple of years earlier. Later I did some boards for him for a project he was pitching. Unfortunately I never took him up on his offer to attend one of shows at LA's Magic Castle. And Rita Rudner and Richard Lewis were a delight; they were the stars of "Whirlpool", where I was typecast as comicbook artist at the EC offices.

There were many, many more I met over the years. It was always interesting. What amazes me are all the stars that were on the show that I didn't meet for whatever reason. Brad Pitt, Patricia Arquette, Katy Sagal, Iggy Pop, Meatload, Patricia Clarkston, were just a few. There were also a number of the English actors from the year they shot the show in London: Bob Hoskins, Francesca Annis, Ewen McGregor. For some reason the production never took me along- they just sent me stills to work from. 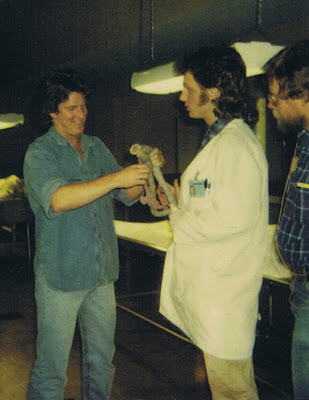 (Stephen Hopkins directs Tony Goldwyn.)
And then there was Stephen Hopkins, who when I was introduced, told me he was a big fan. I thought he was just being polite, but then he asked what I  had been doing since the  Marvel creator owned series "Sisterhood of Steel". I was floored. He was a lot of fun. I showed up one day and he grabs me and tells me to get to the set; Kathy Ireland and Mimi Rodgers are doing a nude scene. I rushed over, only to discover that in transit something had happened to my camera, and it was useless. That he got a big laugh out of; and nobody else lent me a replacement.  Life in Hollywood wasn't always perfect. 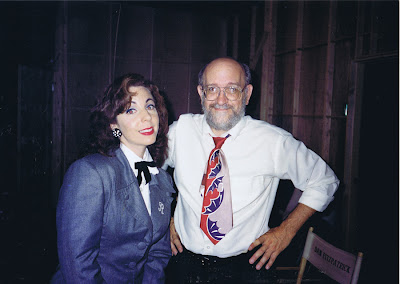