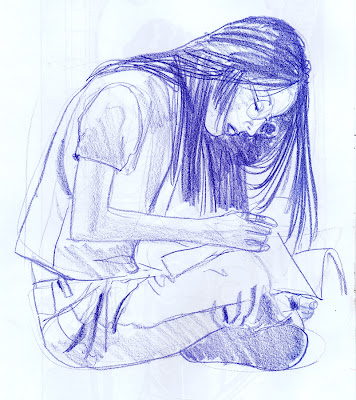 (A sketch of Jen I did at HBO)
Two of the dear friends I've been blessed with over the years are Tom Nelson and Jennifer Yuh Nelson. You couldn't ask for a kinder, gentler, more gracious pair.

I first met Tom and Jen when I was working at HBO Animation on Spawn. We were all doing storyboards and shared the corner penthouse office (42 Floor) in the Twin Tower Buildings in Century City. While I was working diligently away, Tom was listening with great sympathy to Jen's current romantic situation. ("How could anyone every treat YOU like that,Jen...). Then Tom asked our boss Catherine Winder (another wonderful person and great friend...but that's another post) if he could move to another office. Then he moved back into our office. Was I the only one working during that time because Tom and Jen sure seemed to spend a lot of time talking together.

(My wife Annie in our HBO office; Tom and Jen and Jen's mom at the Emmy's; me hard at work)
"You know", I remarked to my wife Annie,"I think  Tom and Jen are going to end up together." She was skeptical...but I knew better. Next thing I know they are married; and I didn't even get asked to the wedding. Well no one did...it was a small family affair. 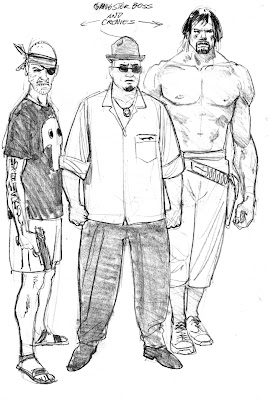 (A design sheet I created with Tom as one of the VERY out of character villains.)
After HBO, when Tom was working on Harry Potter merchandising, he brought me into the project, and I returned the favor when the Narnia movies rolled around, and later on we both wound up on Stan Lee Presents. His work always amazed me in it's simplicity and emotion. Whenever we went into a meeting, Tom was always convinced they were going to fire him. I knew different. I just wanted to stay friends with him so they would continue to use me.  When you're good, you're good.  Tom's latest was storyboarding the Thor movie. 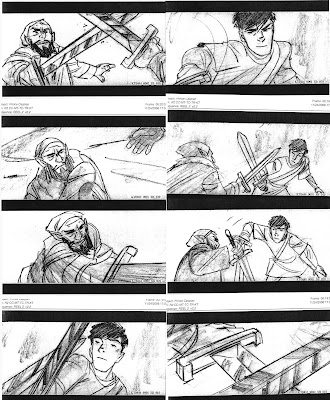 (A sample of Tom's boards from Prince Caspian.)
Jen's dark sense of humor and incredible artistry seemed to go hand in hand. Her work was always a treat to look at. And even though she still has never seen Casablanca,  she can still tell a pretty good story. 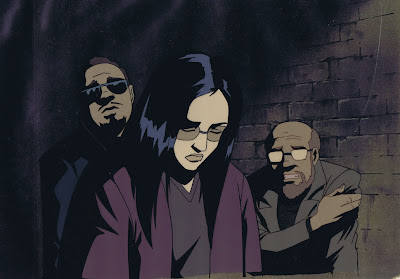 (A cell from Spawn featuring Tom, Jen and myself as the addicts in an alley)
Jen has gone on in her own direction, working at Dreamworks since she left HBO.(Oh how I wish I could print the little poem she wrote for her letter of resignation!) Just recently she became the first woman to be the solo director of a major animated film, Kung Fu Panda II. But enough about her. Just listen to her interviews on NPR, or read Variety, or watch footage from Cannes. She's a celebrity. 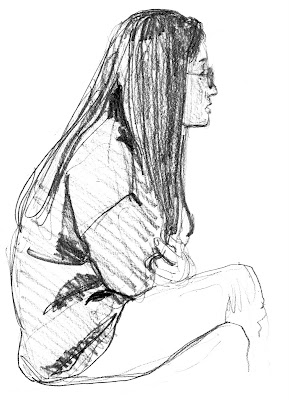 (Another sketch of Jen from the HBO days)
So you have these two incredibly talented artists living together. What amazes me about them is that they simply aren't competitive with each other. Haven't they ever seen A Star is Born? But congratulations to them both. It's good to see that in a world where the bad sleep well, good people also reap rewards.
Posted by Voz at 2:09 PM