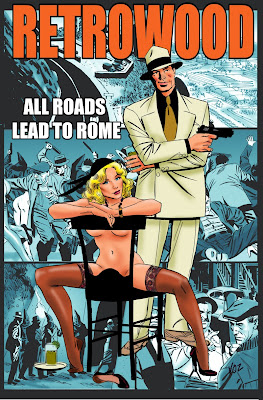 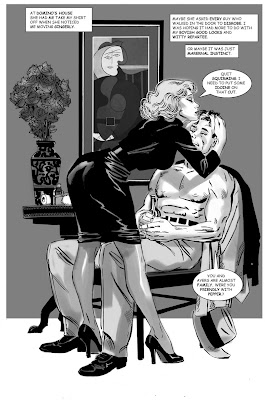 Asylum Press releases FREE Retrowood: All Roads Lead To Rome #1 digital comic  Oct. 22, 2013 (Los Angeles) Frank Forte announces that Asylum Press will be releasing Mike Vosburg’s crime comic, Retrowood: All Roads Lead To Rome #1 (of 3) for free on all digital platforms.  SPECIAL 16-PAGE FREE FIRST ISSUE!  Private Investigator J. Parker Wrighte is hired by Monolith Studios to look into the suicide of one of their major stars, Pepper O'Dell. He discovers from talking to her co-star, Jack B. Nimbeau, that Pepper was not the sweet and innocent girl next she played on the screen.  Parker also meets the seductive screen star Domino Mueller and drives with her to a clinic run by Dr. Rome. Features special pencil art and thumbnail gallery.  Fans of crime and mystery fiction will love Retrowood: All Roads Lead To Rome.
Retrowood: All Roads Lead To Rome #1 (of 3) will be available for FREE on all digital platforms starting Oct. 23, 2013.  Retrowood: All Roads Lead To Rome #1 (of 3) will be available for free on Comixology, ComicsPlus, Graphicly, My Digital Comics, DriveThruComics, AVE-Comics and can be found on on iPad, iPhone, Android devices, Mac, and PC.
Retrowood series description: The environment is faux Depression era Hollywood, complete with snarling gangsters in snappy suits, the untouchable wealthy , corruptible starlets in sleek revealing gowns, and elegantly designed automobiles set against the poverty and despair of the average joe. And in the middle of all this a world of celluloid dreams is being created. Private detective J. Parker Wrighte, is on an upwardly mobile career path from his lowly dust bowl beginnings, but finding that every advancement comes with cost and compromise. Working for the Kinchay Agency, Parker is investigating a case for Louis Orwell, one of the most powerful men in Retrowood; but at every turn he is continually dragged back into contact with his past, beginning with the murder of his best friend from childhood, Henry Irving. Drunken priests, sadistic nuns, nymphomaniacal wives, with basketball and gambling thrown in…. How can you go wrong with that?
“We’re excited to have Mike on board at Asylum,” says publisher Frank Forte, “Retrowood fits in with our growing list of titles.  After H.I. or L.O. we have a number of Retrowood one shots coming out as well as a new 4 issue series that Mike is drawing right now.”
RETROWOOD PREVIEW LINK:
http://asylumpress.blogspot.com/2013/10/free-retrowood-all-roads-lead-to-rome-1.html

ABOUT MIKE VOSBURG: Mike Vosburg's comics career began in the 1960s, when as a teenager he started Masquerader, one of the first comic book fanzines. He began working in underground comics in the 1970s, with creations such as Split Screen, written by Tom Veitch. Later in the 1970s and 1980s, Vosburg contributed to horror titles by Western Publishing and Charlton Comics. His story "Mail Order Brides," published in Kitchen Sink Press's Bizarre Sex #3, was in a similar horror/mystery vein.  Around this time, Vosburg also did various work for DC Comics and Marvel Comics. He is probably best known for his work from that period on Savage She-Hulk, Sisterhood of Steel, and G.I. Joe: A Real American Hero. He also worked on the Valiant Comics' titles Bloodshot and Archer & Armstrong.  From 1989-1996, for the TV series Tales from the Crypt, Vosburg illustrated comic book covers designed to look like the original 1950s comics. Originally hired to do concept drawings for the wraparound sequence, Vosburg ended up storyboarding the title segment as well as illustrating almost every cover used in the show's 93 episodes.   ABOUT ASYLUM PRESS: Asylum Press is a publishing company that produces premium comic books and graphic novels within the horror, science fiction, and action genres. Asylum Press' books feature original, character-driven stories and cinematic artwork by top creators and newly discovered talent that will appeal to not only comic book fans, but also mainstream fiction readers who don't normally buy comics.  Asylum Press delivers high-concept books via a bold new business model that focuses on digital publishing and new distribution outlets in both the American and international markets.  Asylum Press is distributed by Diamond Comics Distributors, Liber Distributors and Tony Shenton and to the Booktrade by SCB Distributors, Ingram and Baker and Taylor.  Distributed in the U.K. by Turnaround Distribution. 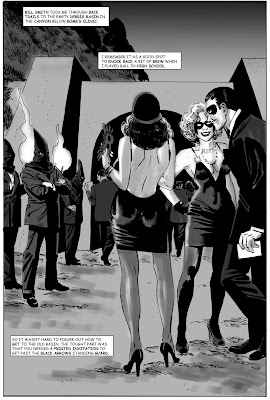 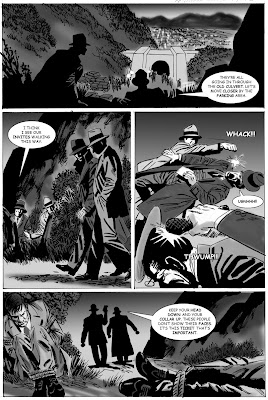 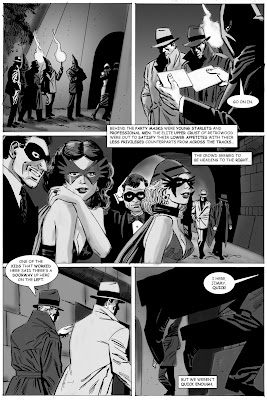 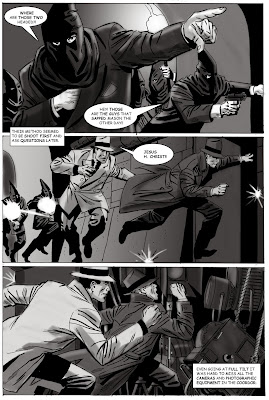 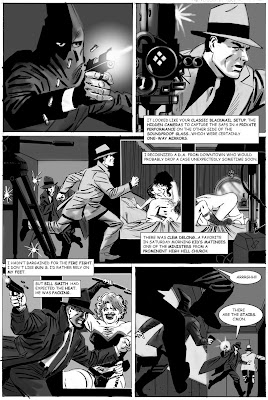 For those of you interested, the earlier editions of Retrowood are also available digitally from  comixology: http://www.comixology.com/search?search=retrowood 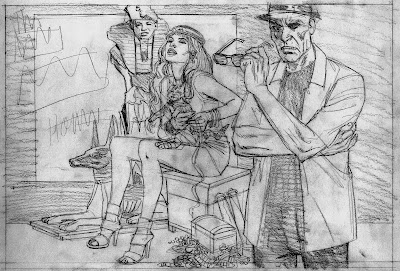 Meanwhile, my new series, The Mad Mummy keeps moving along. I wrapped up the pencils on the second issue this week. The first books should be ready for the publisher in early 2014. If I'm vague, it's because I'm still learning (remembering) how much is involved in producing a regular book.  But I will keep everyone posted here on the progress. 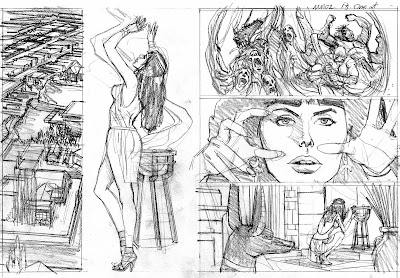 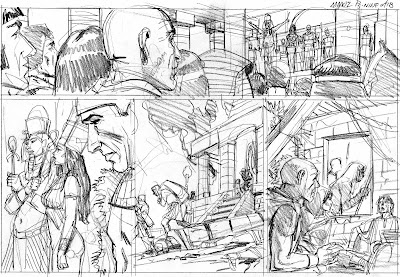 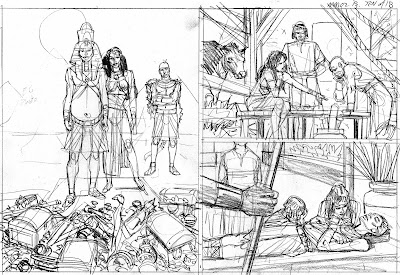 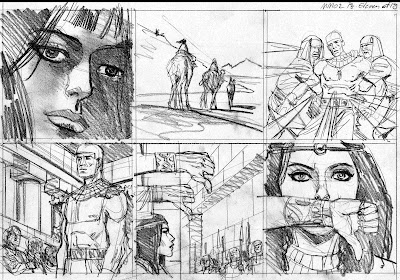 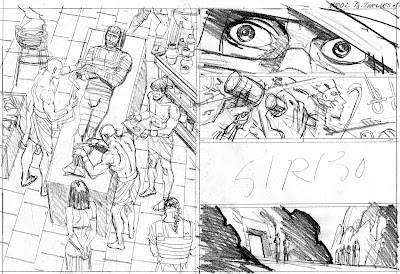 Just cause they were fun to do, here are three pinups I had commissions for recently. Next week I'm doing a Starfire and Belit pinup. 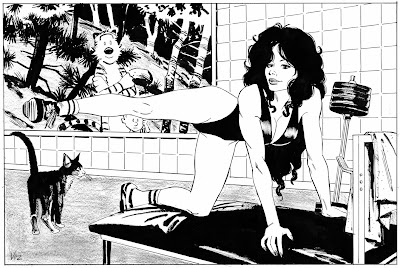 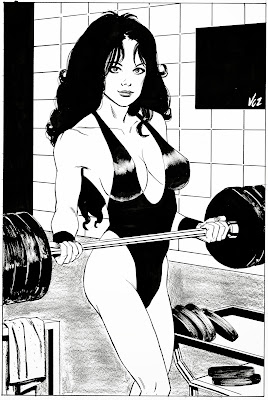 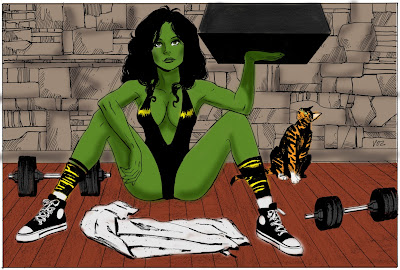