THE INKER DID IT 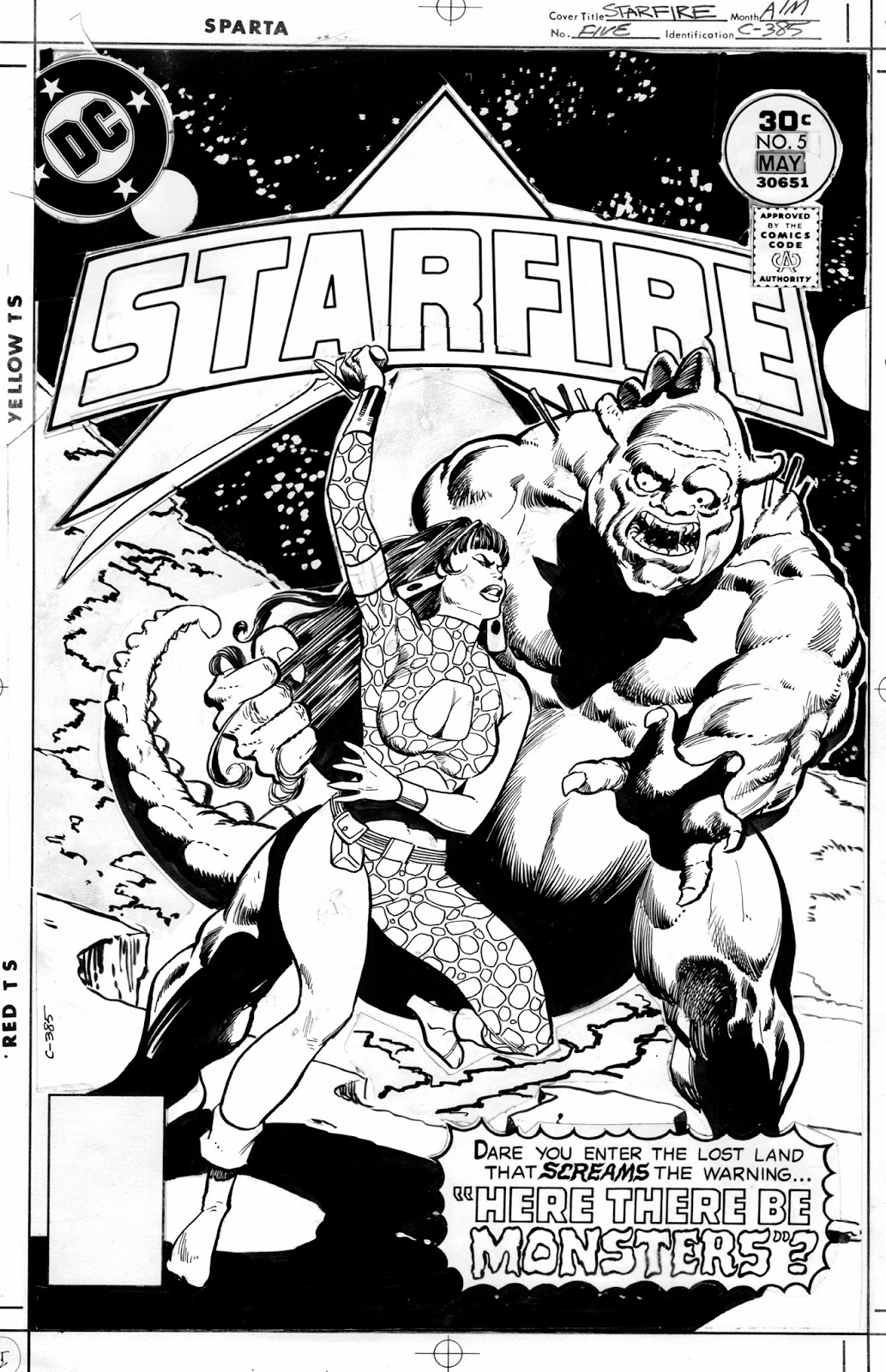 One of the more thankless tasks that a veteran artist can have is inking a young artist's work. If the final product  looks great, it was due the penciller's brilliant drawings. If there are weaknesses, they were certainly created by the last person who touched the work: the inker. I know this from personal experience because as a fledgling cartoonist my friends had to put up with my continual diatribe every time an issue of my work appeared about how disappointed I was in the finishes the inker had produced on my work. It wasn't until I had  learned a good bit more about drawing and draftsmanship that I was forced to acknowledge just what a youthful idiot I was. Thank god for the efforts of the professionals who brought a bit of life to my inept scratchings.

In retrospect, I was very lucky to have the opportunity to work with and learn from so many talented folks in the business; and if I didn't thank them personally at the time, here is a belated thank you to the entire group.

My first job in professional comics was a four pager for Western Publishing in Boris Karloff Presents. Needless to say, just getting work was a thrill, but working on a title with Karloff's name in it was an added bonus. I do remember the editor who gave me the job admitting, "I don't know much about comics, but you seem like a nice young man."  Talent apparently was overrated. 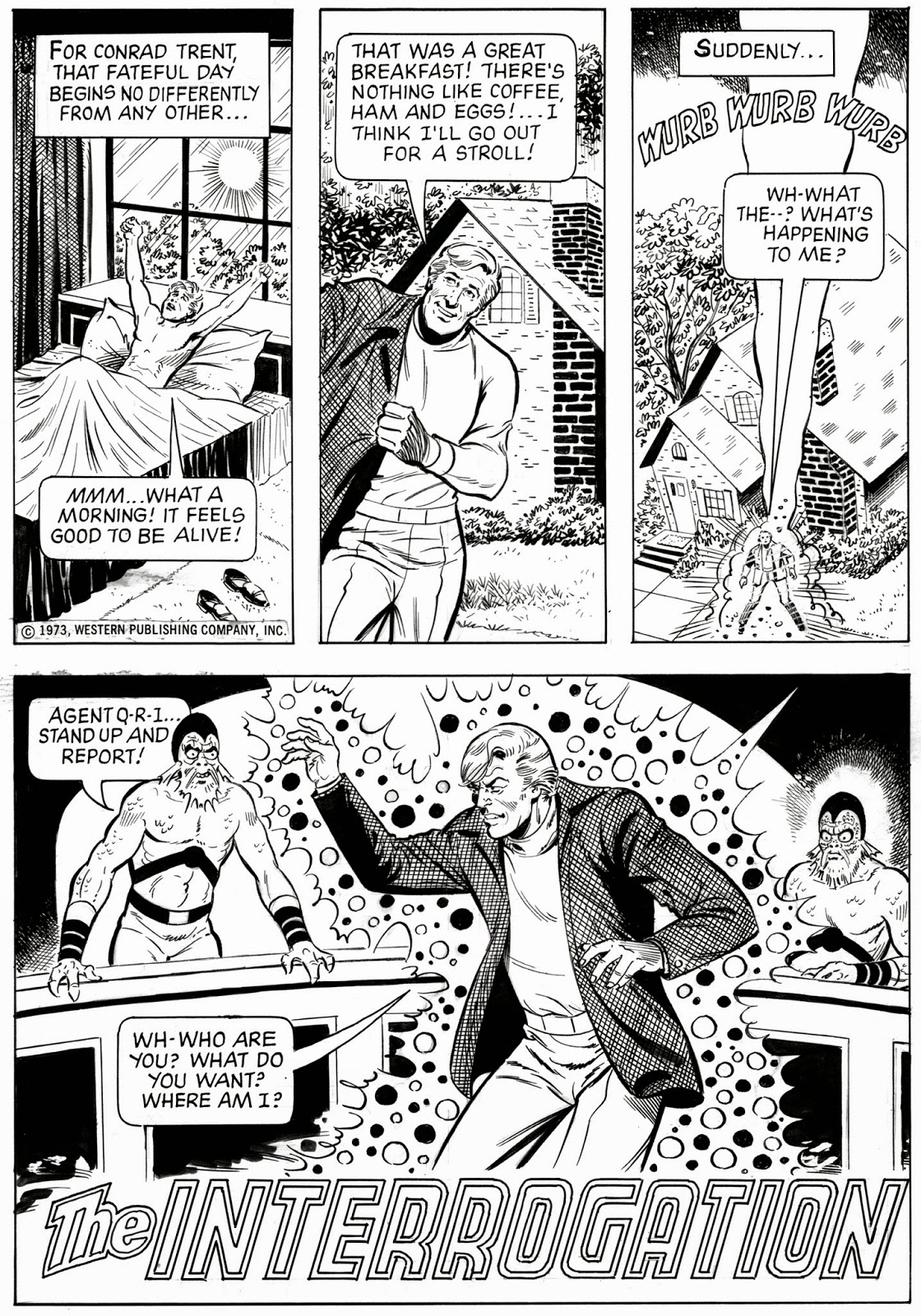 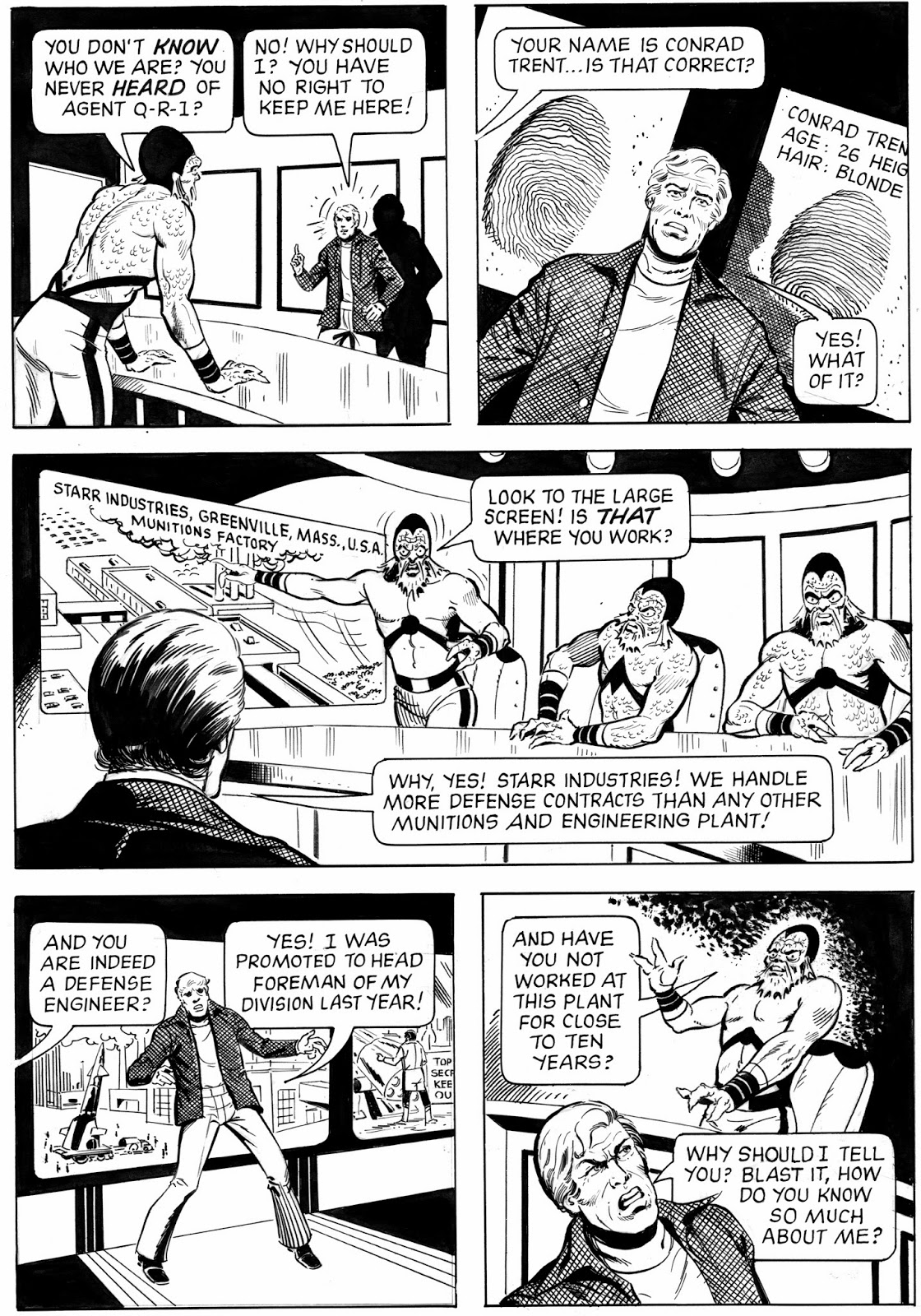 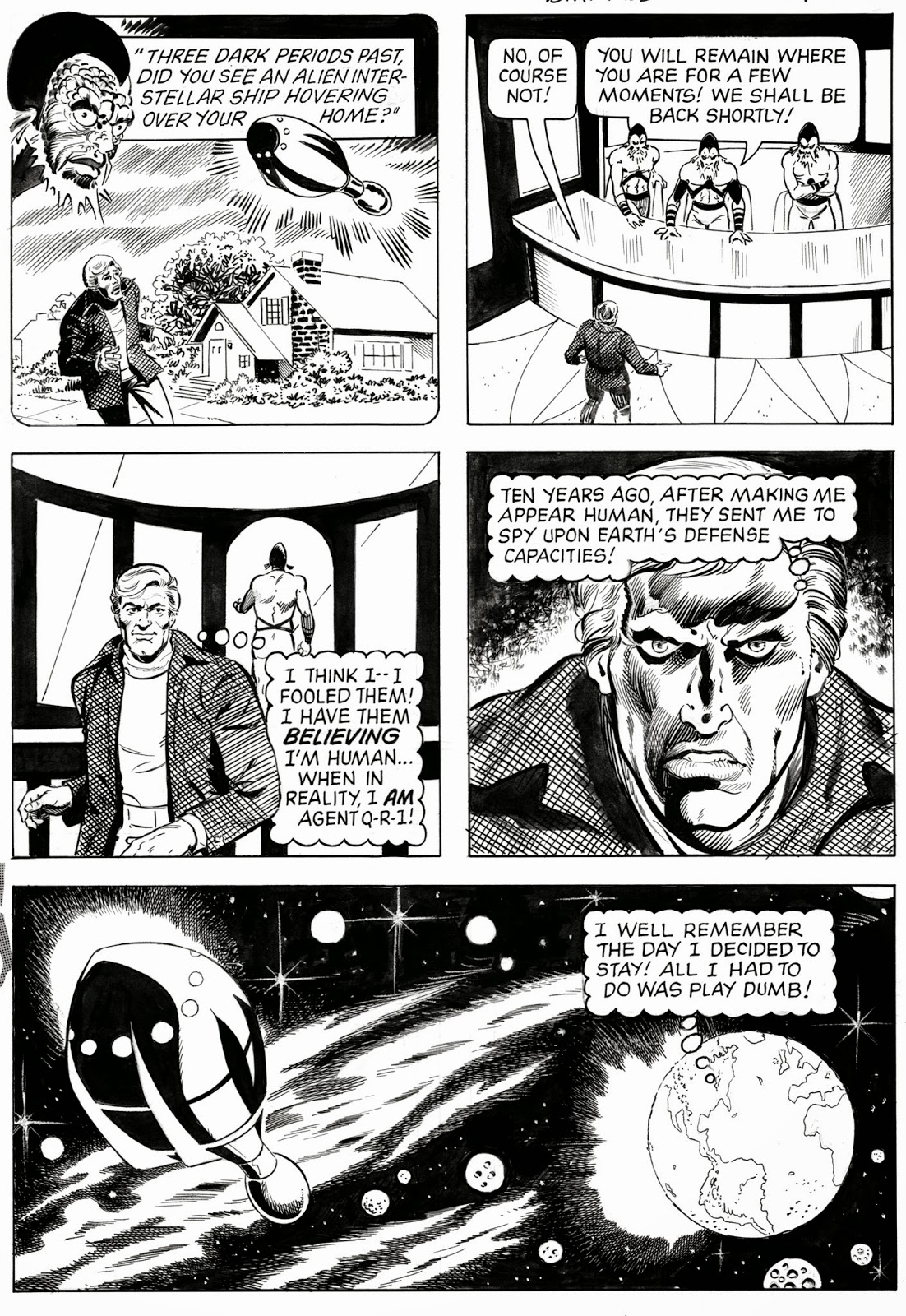 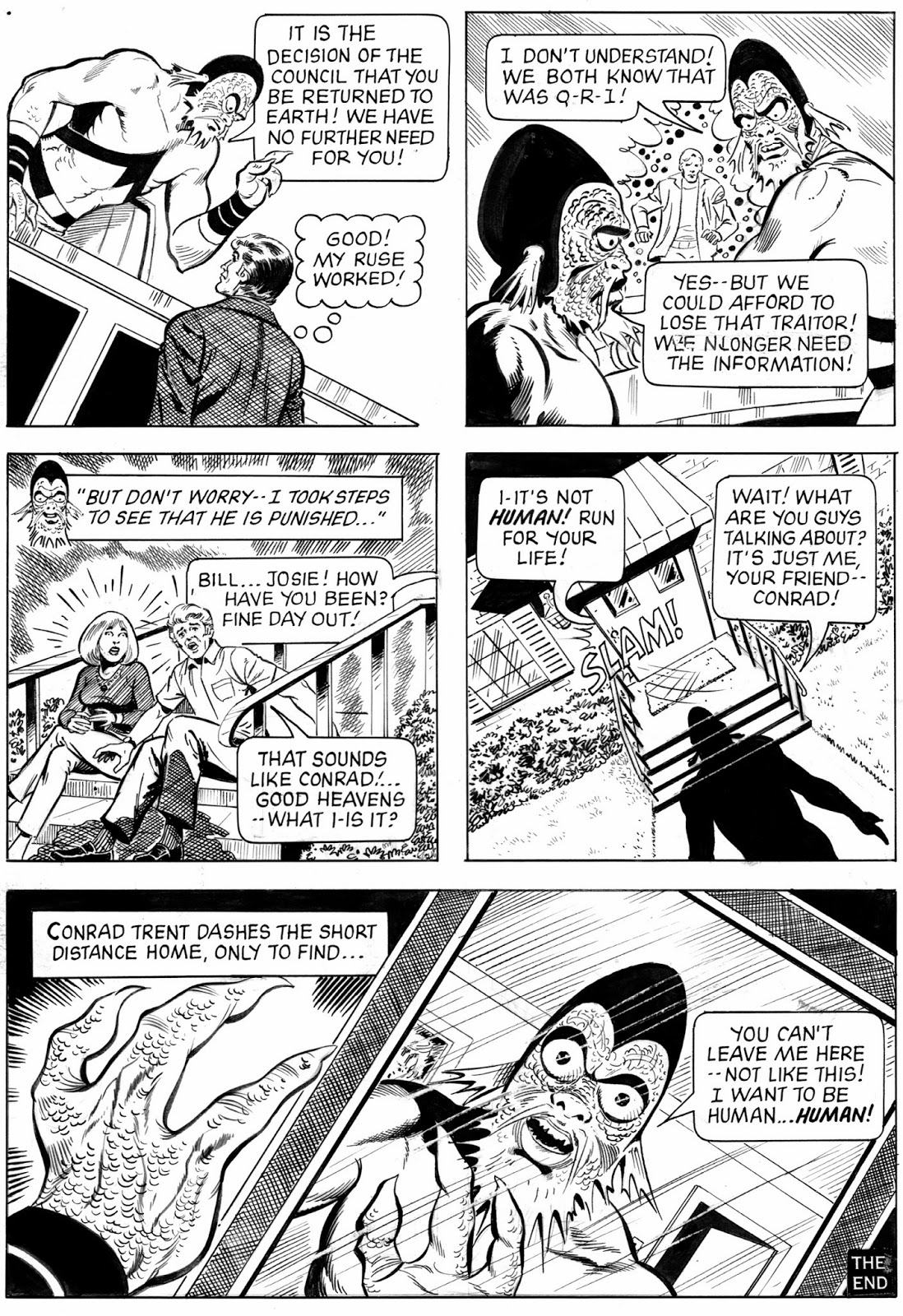 Mike Peppe wound up inking the story. I never met Mike and know very little about him other than that he inked a lot of Alex Toth's work in the 50's. Alex was always very complimentary about Mike's inking; I'd go so far as to say he almost raved about the stuff. I don't know how much he helped Alex's work, but he certainly brought a lot to mine. (When I worked for Western, I was always getting comments about how I was drawing head's too small; when I was doing work for Marvel they complained I was doing heads too large. )

The first regular series I worked on was Deadly Hands of Kung Fu, featuring the son of Dr. Fu Manchu, Shang Chi. I remember that Dan Adkins did a very nice job on one of the stories, and I inked at least one. The artist who did most of the stories and really made my work shine was Jack Abel. He was a very sweet man, and a favorite of a lot of the young artists who hung out at Neal Adam's Continuity Studio. Jack always had time to swap stories and give you pointers both on the work and the importance of professionalism. Since the work was reproduced in black and white, there was a subtlety in the tones he added to the inking that really brought a sense of depth and realism to the pages. 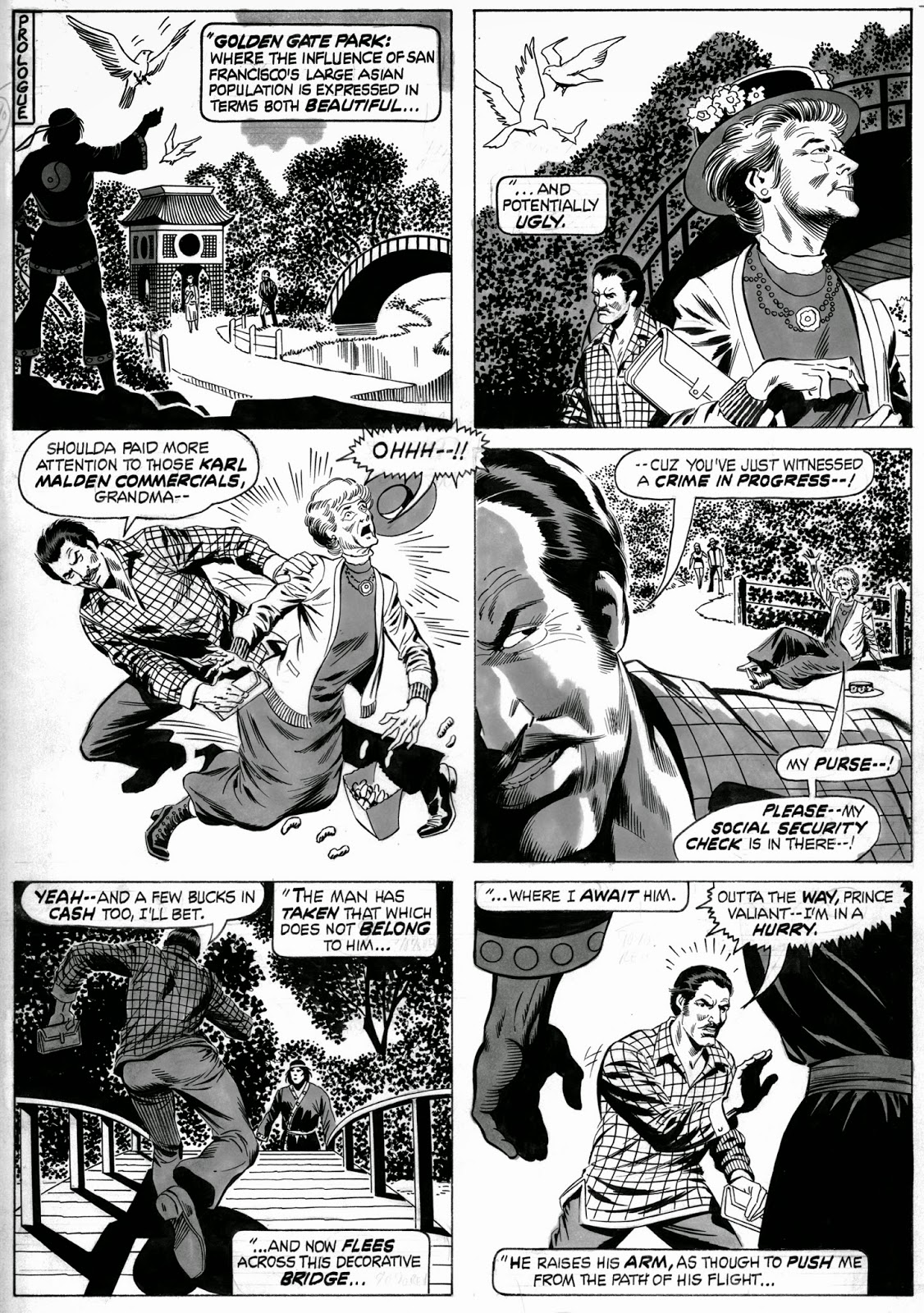 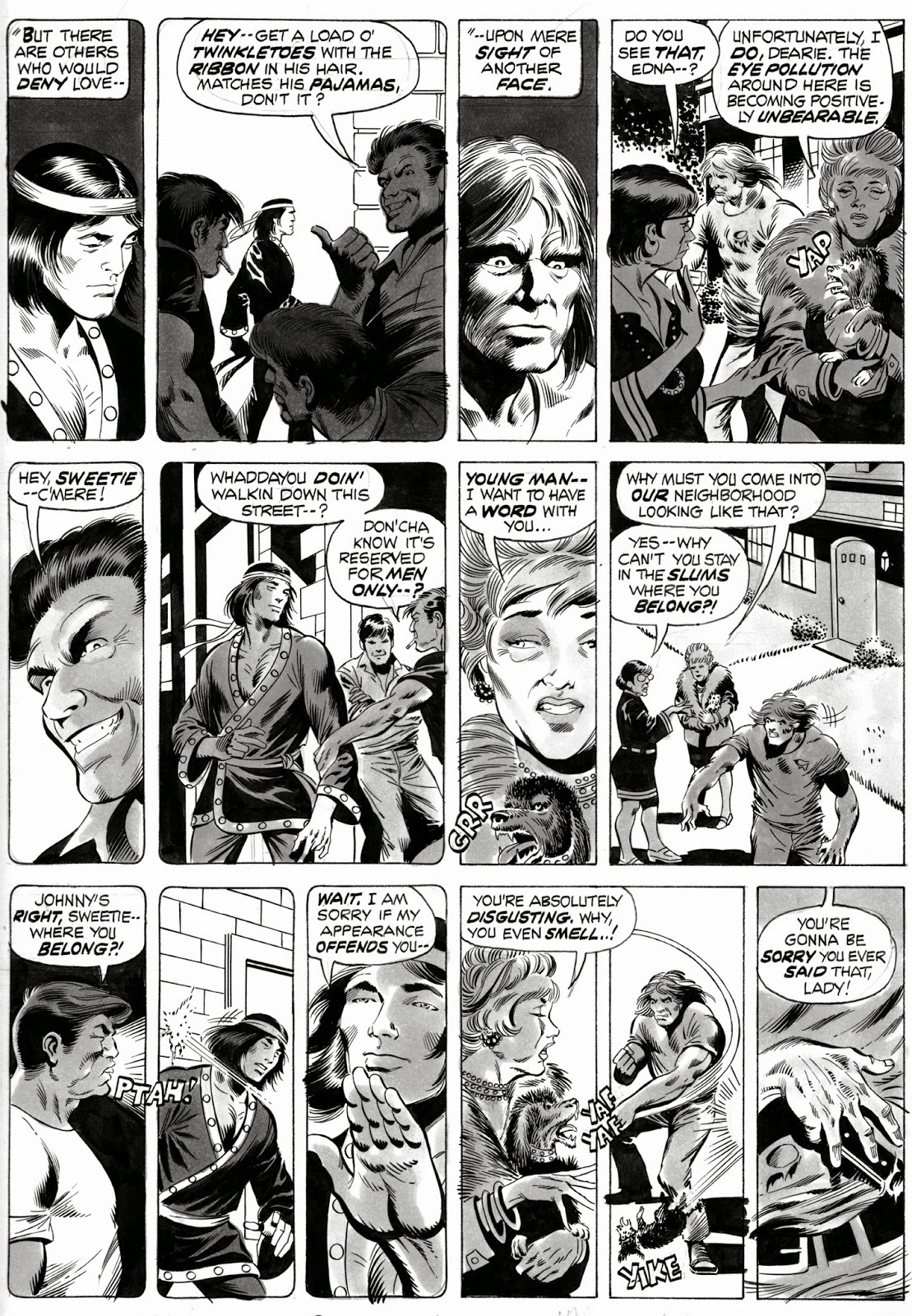 If you were going to start a comicbook company in those days, Vinnie Colletta was probably the first person you should hire. He could take a entire book home on the weekend, and bring it back on Monday with a very professional finish to it. Vinnie could take the most mundane work and bring a solid  polish to it. He was one of the first art directors I met and he always had good advice for me about getting work. And when I did start getting work at DC, Vinnie liked the stuff I was producing and inked the majority of it, and did a very fine job of it I might add. He always seemed to put a bit extra into my pages. 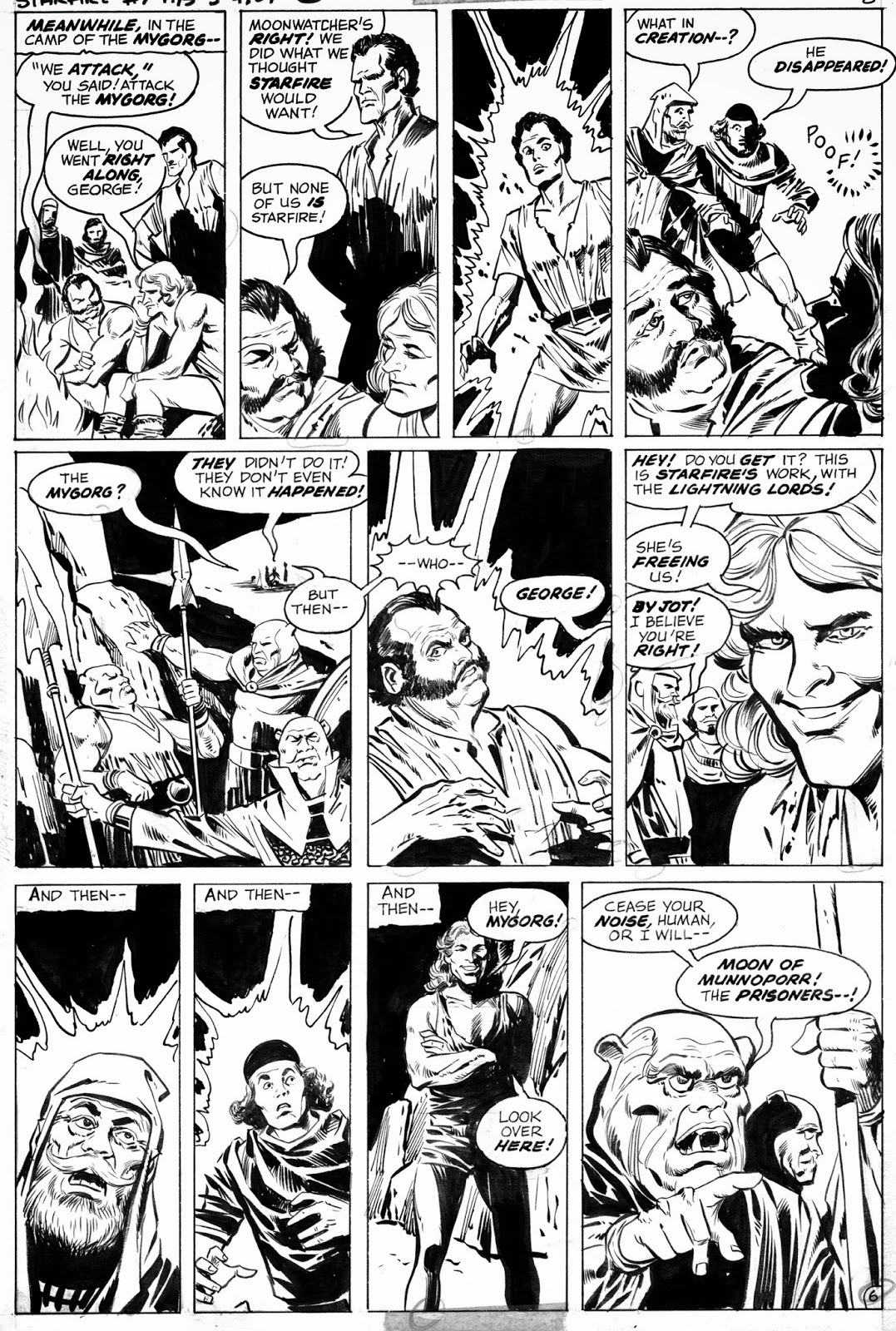 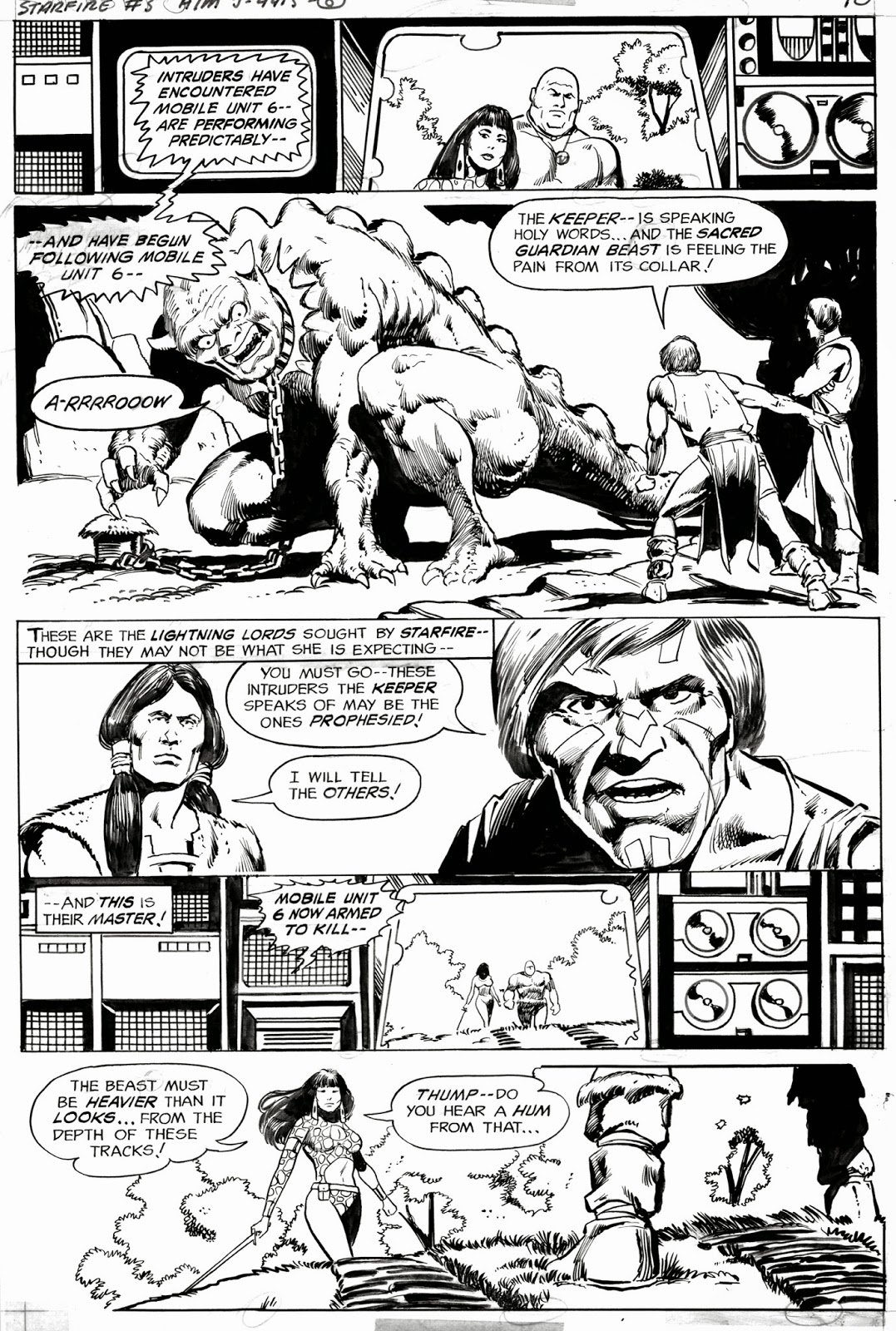 Unfortunately, the better your work became, as is the case with so many inkers, the less Vinnie could really bring to the table. He produced the work quickly and with a very solid look to it. but if you wanted to take the work to the next level, that was not his forte. Consequently, as my pencilling skills progressed, I wasn't seeing the finished product looking any better. I felt it was time to move on and left DC for Marvel. 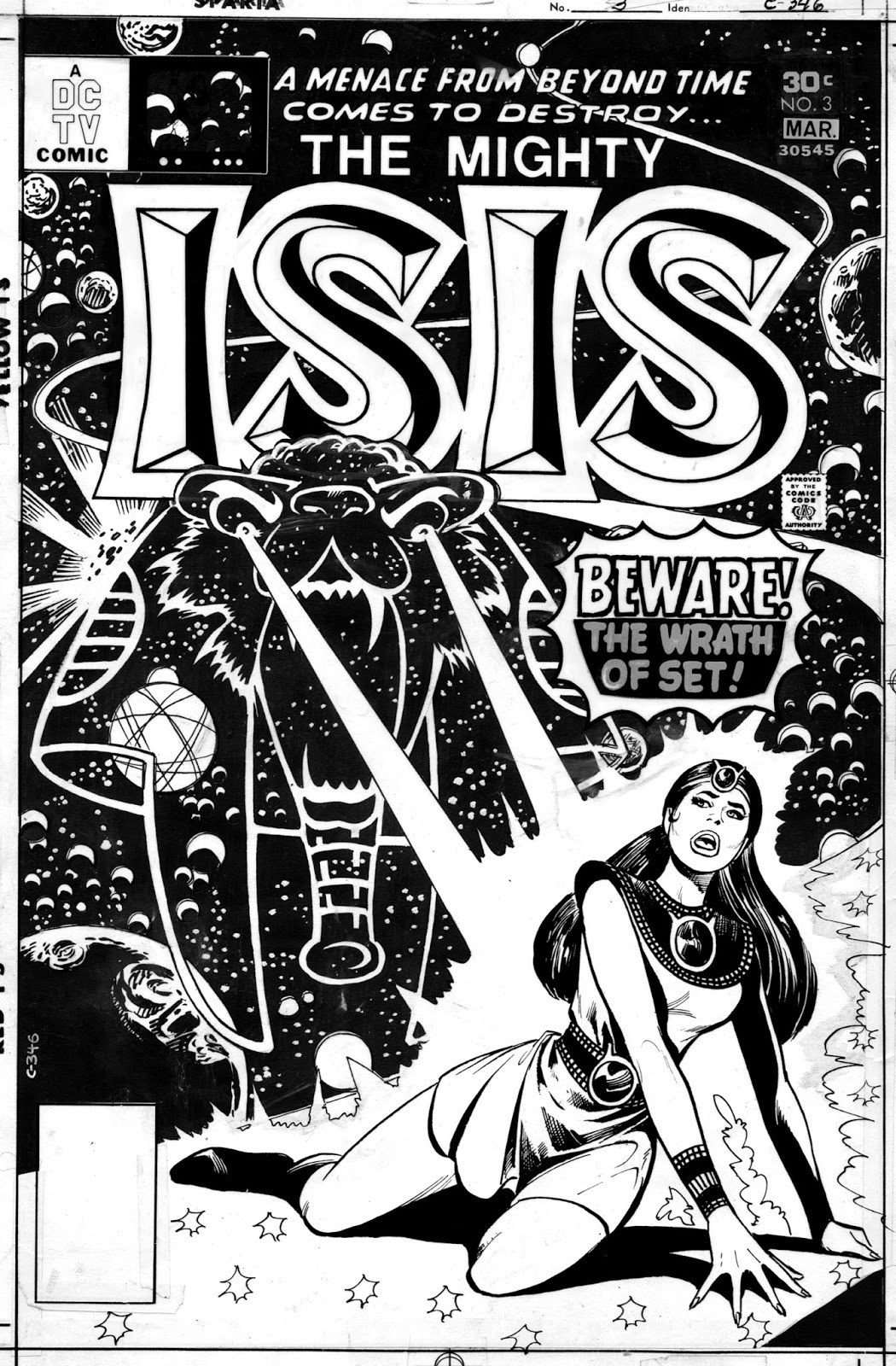 My first job back at Marvel was on a book called Team America. My new boss, Jim Shooter,  greeted me enthusiastically by asking who I'd like to ink the book.  I'm afraid that I answered somewhat ungraciously, "Anyone but Vinnie", and was immediately hit with Instant Karma. Jim's face fell, and he announced he had already brought Vinnie over from DC and had promised the book to him. Of course, once he told Vinnie my comment, that ended our relationship. 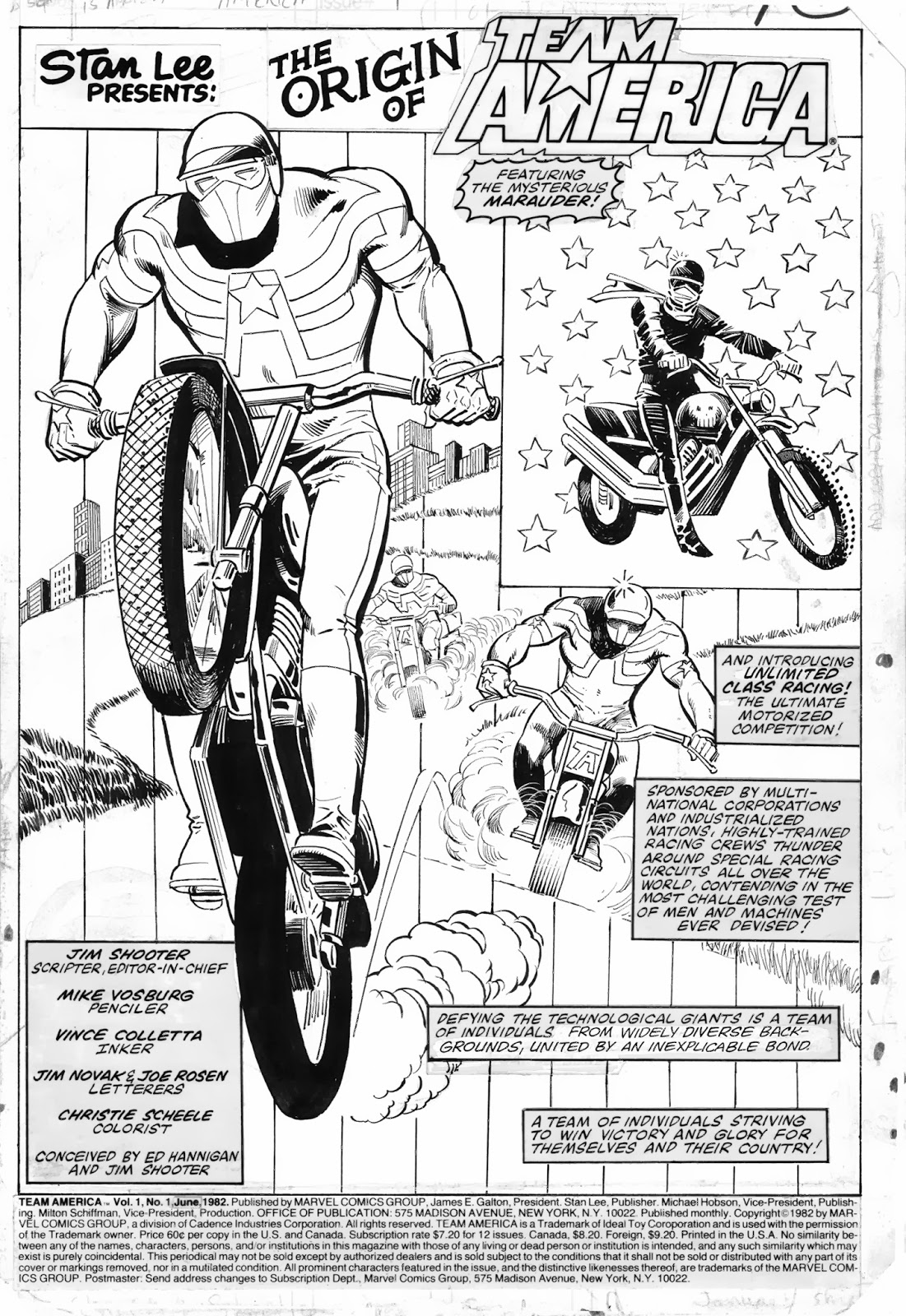 When I brought in the pencils for the first issue and showed them to Jim, he was very happy and didn't suggest or ask for any changes. However, once the book was inked, the weekend before the final print deadline, Shooter suddenly decided he hated what I had done, and a major part of the story was redone. I suddenly became a persona non grata in the Shooter regime, and while I continued to pick up work for another couple of years, my days at Marvel, and in comics, were pretty much over. Fortunately, I had just moved to sunny LA and was starting to work in the animation and film business and a whole new world opened up to me. To paraphrase Julie Andrews when she won the Golden Globe for Mary Poppins after being passed over by the studio head for the lead in My Fair Lady: "My thanks to Jack Warner, who made this all possible.":  My thanks to Jim Shooter. 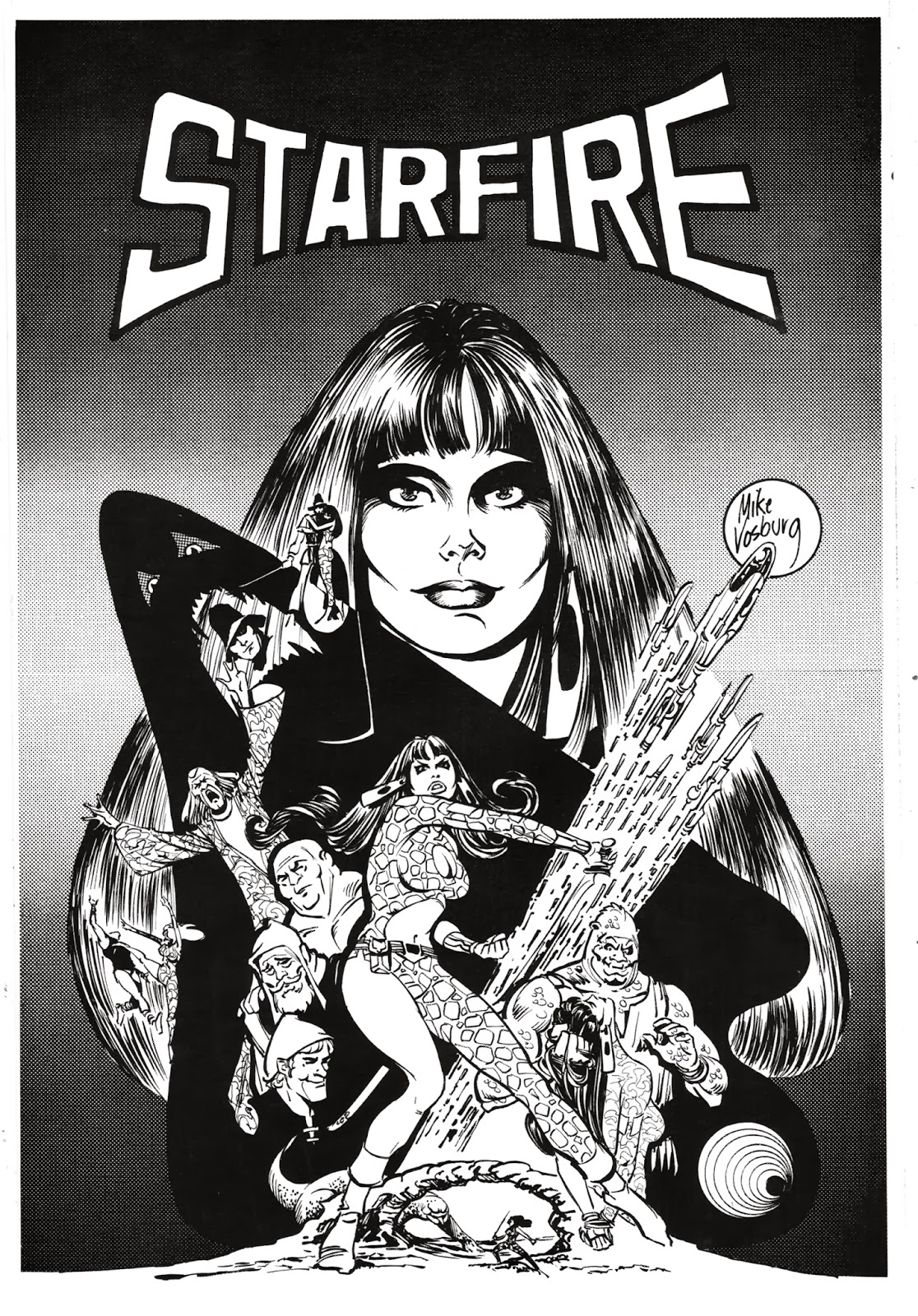 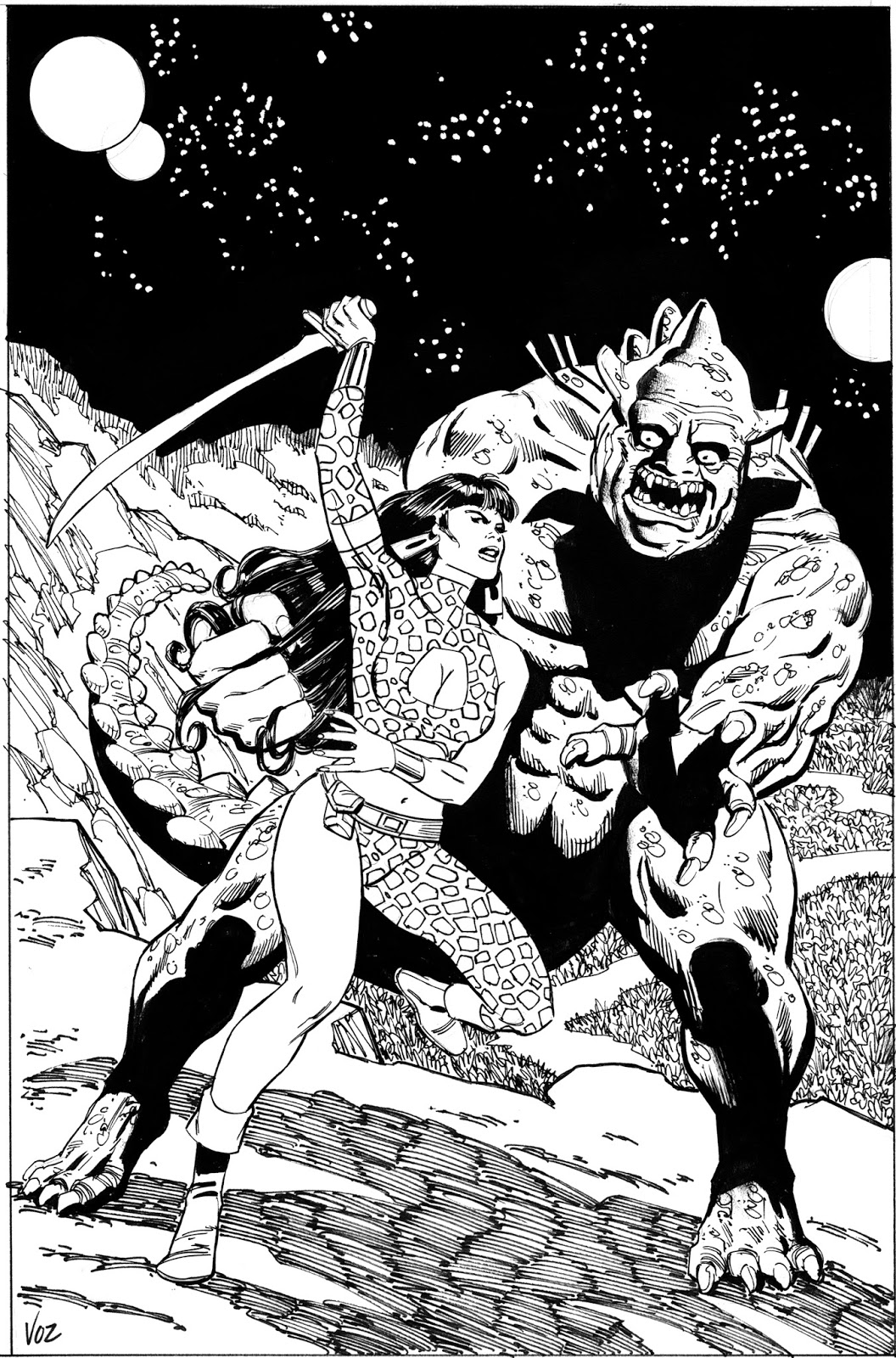 Next week at look at some of my favorite jobs inked by Giordano, Alcala, and Springer.