Tales From the Crypt 1 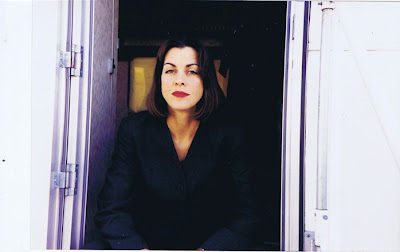 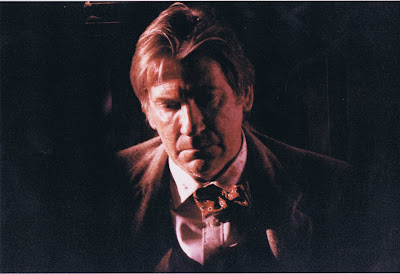 TALES FROM THE CRYPT
While I was sharing a studio in Los Angeles with Howard Chaykin, he decided to leave the world of drawing comics to pursue a career in screenwriting. During a pitch to Joel Silver, the noted producer asked Howard if he would be interested in creating some comicbook covers for a TV series he was working on with HBO. Howard demurred, but passed the job onto me. Thus began a fabulous run on HBO's Tales From the Crypt, a job that introduced me to Hollywood and the magic of movie-making.

When I met with Bill Teitler, who was the production head of the series,  comic book covers were never discussed. What he was really interested in was producing a series of inspiring visuals that could be used as a basis for the introduction for the show. Bill ran through the scenario as he saw and I quickly created an abbreviated storyboard of the action, starting with a lightning flash on the exterior of an old mansion, then a quick truck into and through the doors, across the abandoned parlor, then through a secret panel bookcase, down the stairs of a secret passage to a a subterranean chamber where a coffin sits and out of which the Cryptkeeper pops up as we zoom in. My job was to create a set design for each of these environments.

The storyboard was an afterthought that served more as a map from me, but I am always amazed at just how closely the finished piece of film followed my scribblings. 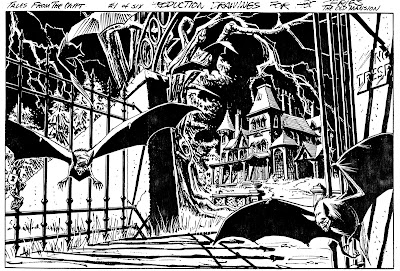 I came up with a number of roughs and discussed them with Bill, and we worked through what changes were needed. Then, with an assist from the talent Richard Ory I created five key environment drawings for this sequence. I thought that was the end of my involvement, but a couple months later I got a call from Joel Silver's assistant, Connie Johnson, asking me to come in and discuss some cover ideas for the six shows they were producing. 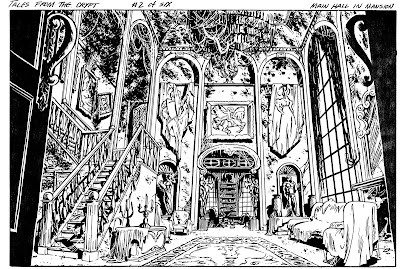 Joel's office blew me away. First off, it was on the Warner Bros. lot, which I had never visited before. I felt like a peasant who was being admitted to the castle for the first time. Joel was a great admirer of Frank Lloyd Wright (he lives in one of the fabulous Wright houses in the Hollywood Hills) and his office was designed and decorated with lots of Wright design elements. The room for my meeting  was lined with bookcases filled with scripts; I can remember seeing ones for The Watchmen (this was l989) and Sgt. Rock. Bill Teitler came in and explained the nature of the job: they wanted to open the show with a faux Tales From the Crypt cover that would feature the stars of the episode and done in the classic E.C. style. Was I interested? Was I interested!! 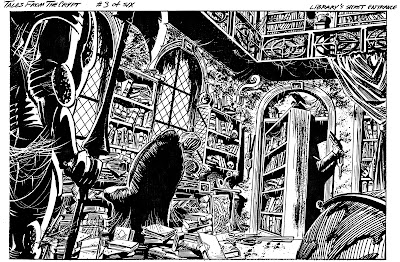 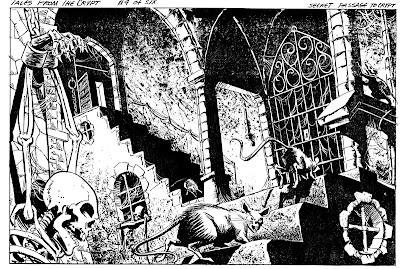 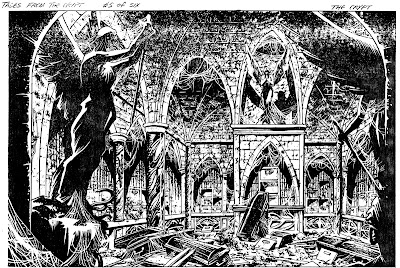 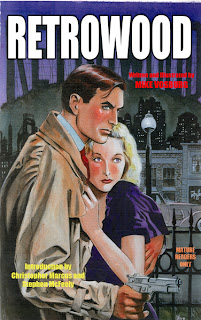 DON'T MISS YOUR CHANCE TO OWN YOUR COPY OF THE
LIMITED EDITION RETROWOOD TRADEPAPERBACK.128 PAGESB&W WITH COLOR COVERTHREE ORIGINAL STORIESWITH BONUS FEATURES INCLUDING SKETCHES AND
THUMBNAIL PAGES.
ALL FOR ONLY
$25.00EACH SIGNED COPYWILL ALSO COME WITHA PIECE OFORIGINAL ARTWORK FROM THE BOOKSIGNED BY VOZ!!ONLY 200 COPIES OF THIS BOOK WILL BE MADE AVAILABLE

For more information go to: