“I want to thank you, thank you for being my friend.”  Andrew Gold

Shortly after moving to Los Angeles in 1985, I began looking for freelance work in the field of animation. Not only was Christy Marx a great help in giving me leads and suggestions on who to talk to, but I after attending a meeting of CAPS  (an organization of cartoonists that met once a month) I suddenly found I had a lot of doors opened to me. The animation industry had a healthy respect for artists who worked in comics, and were usually familiar with your work.

At the time I was being forced out of Marvel comics by the current editor, so moving into the better paying field of animation was pretty much a no-brainer. When I was living in Battle Creek, the anxiety always was if I working in comics, where could I work. Once I was in LA, the question switched to how do I get out of comics so I can move into other areas. It certainly gave you a lot more bargaining power when dealing with editors and directors. 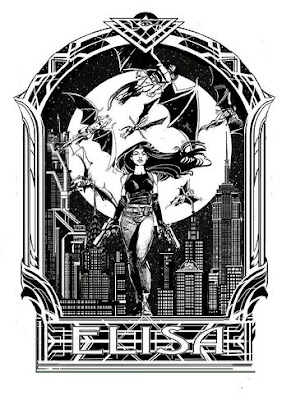 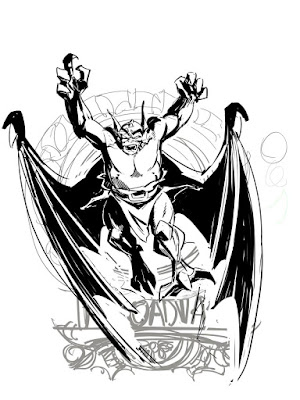 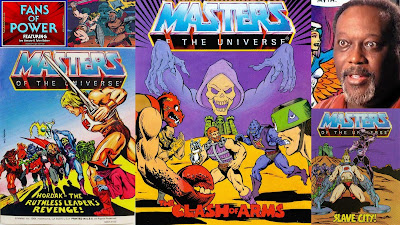 (Larry Houston and a couple examples of his comics and animation work.) 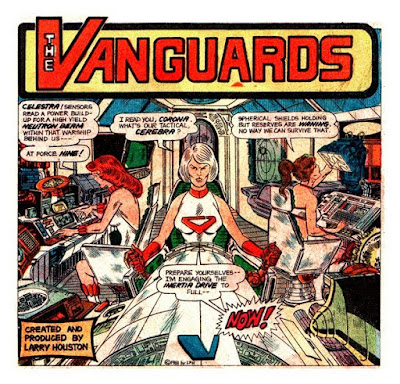 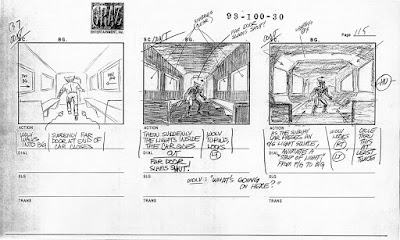 Strangely enough, I went from working at Marvel Comics to working at Marvel Animation, doing character designs and storyboards. The adaptation experience was easy enough, and aided by any number of artist friends. Two of folks who were most helpful were Larry Houston (whom I’ve always referred to as the Jack Kirby of animation storyboards) and a young Frank Parr, who I shared offices with more than once over the years. Both of them were a great source of education about the differences between the static images of comics and the illusion of movement in film.
And I might also mention that I was continually meeting or working with the likes of Alex Toth, Jack Kirby, Moebius, Russ Heath, Jesse Santos and Alex Nino. 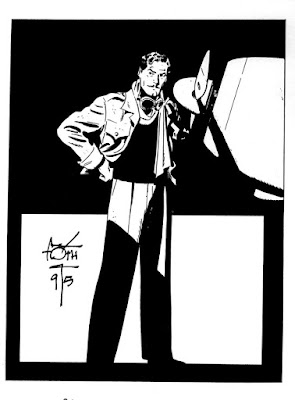 As will happen, after a couple of years, animation went through a very slow period. Howard Chaykin had recently moved to LA, and he approached me about the possibility of getting studio space and working together on a run of American Flagg. Needless to say, I jumped at the chance. Howard was a master of design and storytelling, and an accomplished illustrator. He taught me how to me bring my work to a new level of finish. We used a paper called Craftift that essentially added tones so that the effect was much more three dimensional. After poring through his copies of the Famous Illustrator course, I quickly bought my own copies and started studying them. It wasn't difficult to see that all the cartoonists I had admired like Toth, and Kubert and Starr, were all tremendously influenced by these illustrators. 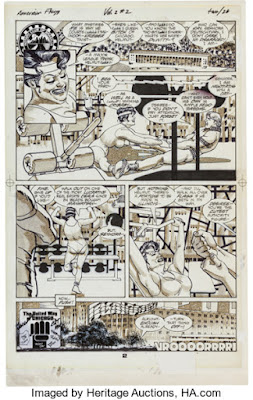 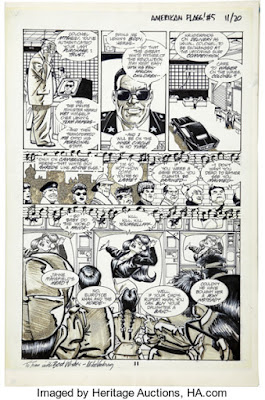 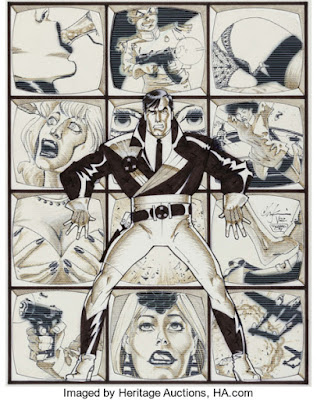 Over the several years we had the place, my studio mates were Steve Mitchell, Sean McManus, Richard Ory, Don Cameron, Roy Burdine and Scott Hemming to name a few. It was great environment where I started expanding as a painter and learning more about color. While Howard moved on to writing for TV, he taught me the most valuable lesson: better to be a first rate Mike Vosburg, than a second rate anyone else. And he also recommended me for the job of drawing all the faux comic book covers for the Tales From the Crypt TV series, which was my first job where I was doing a comic book style but producing illustration. And it started me working in film. 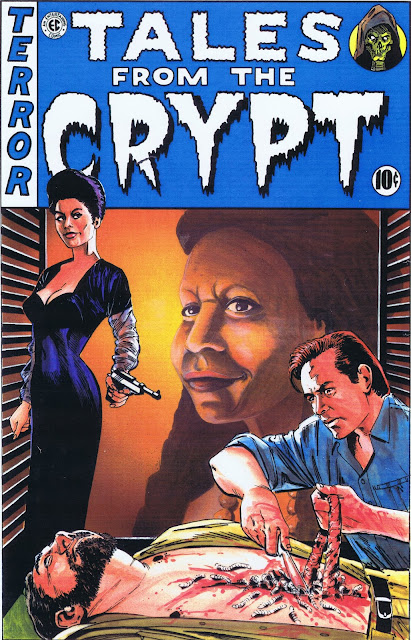 One of the artists I had run into at CAPS was William Stout, who hosted an open life drawing workshop every Sunday morning. I had been pursuing this discipline for a while, but it soon became a routine I’ve now followed for 25 years. Yes, those hundreds (thousands) of hours drawing the figure from life do make a difference in your work. And often I was sitting next to the likes of Dan Gouzee, Rod Dryden, Peter Brook, James Goodrich, Terry Gordon,Dave Glover and so many other talented professionals. The conversation is always scintillating, and you are always being introduced to new artists and new approaches 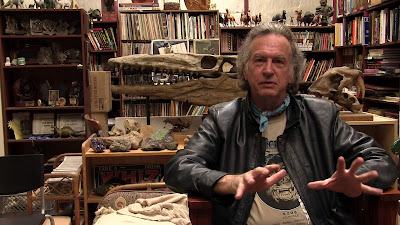 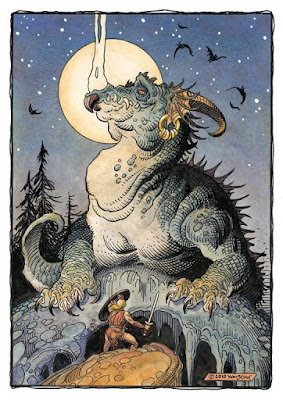 One of the first folks I met in animation who has stayed a very close friend over the years was Zahra Dowlatabadi, who was our art department assistant on Bionic Six. That roll was quickly reversed as she soon moved on to producing and has been very successful.  When I was looking for work she introduced me to her friend, Catherine Winder, who hired me to work at HBO animation, certainly the best job I ever had in the field. (She and Zahra have co-written the ultimate handbook on the process called  Producing Animation)  Catherine was the best boss you could ever ask for. And the folks I worked with at HBO still have regular reunions…something unheard of in the profession.

One of the ironies of my career is that when I was young and not very good, work was never hard to find. As I acquired skill and taste, that all changed. For example, after I “won” an Emmy working on HBO’s Spawn, I discovered it was actually a retirement gift from animation;  there were very few  action adventure shows. Likewise, as my comic book style became more realistic, editors were less receptive at that time. After leaving HBO, work was so slow I seriously starting thinking about a different profession. I happened to run into Trevor Goring at a comic con in Pasadena who suggested I drop off a portfolio where he was working on a new Narnia movie. It seemed like a slim chance, but I followed his advice and thought that would be the end of it. A couple months later they called me in where I met Andrew Adamson who hired me immediately and I spent the next five years working on three films and traveling the world. Another serendipitous twist of fate. 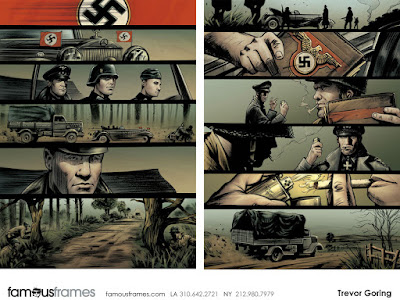 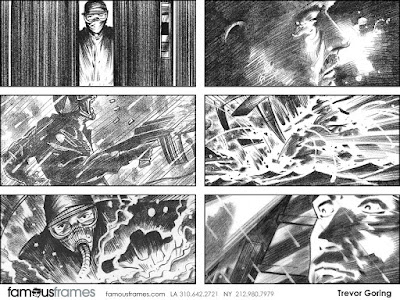 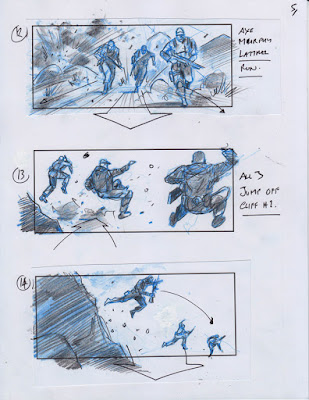 Tevor is a transplanted Brit who at one time had his own ad agency in the UK and also worked in the comics field there on such books as 2000 ad. When he immigrated to the US he started working doing ad boards and in live action films. He is an amazing talent- a first class storyteller, draftsman and graphic designer.  One glance at his IMDB page and you wonder if there is any film project in the past thirty years he hasn’t work on. He recommended me for the first Narnia film, and I returned the favor on Voyage of the Dawntreader. 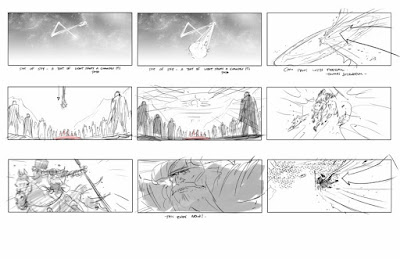 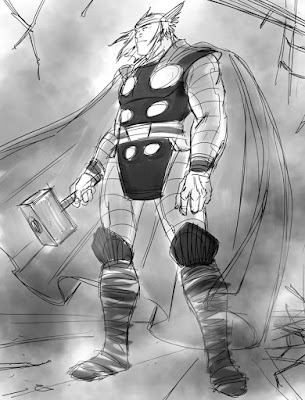 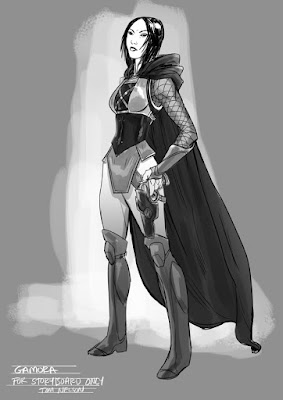 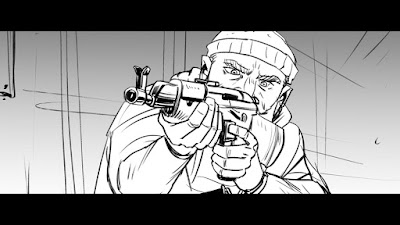 The switch to working on live action films came easily to me, though I was a bit daunted at first. Andrew Adamson liked the fact that I also understood animation and asked if there was anyone else in that field I might recommend. Tom Nelson was one of the HBO crew and I quickly sang his praises. Like myself, through trepidatious at first, Tom quickly adapted and animation lost one of it’s finest as Mr. Nelson has continued working on blockbuster after blockbuster  super hero epic such as Thor, The Avengers,etc.. We also gave Tom the nickname “Mr. Wizard” because of his savvy tech skills. He has brought me kicking and screaming into the 21st century with new technology many a time. (Tom, who met her while sharing an office with me at HBO,  is also married to Jennifer Yuh of Kung Fu Panda fame. Don’t miss Jen’s live action directorial debut The Darkest Minds in cinemas now.)


The truth is, you never make it alone in any profession. While it’s always necessary to do all the hard work to prepare for when your lucky break comes along, it’s usually friends who are supplying the connection to that step forward. And when things are slow, the good ones are always there to keep your spirits up. Friends remember you…and if you’ve screwed them they remember that too. More that just as a source of helping you find your next job, friends are there for the camaraderie, and to enhance your life with their friendship. As my late friend Leonard Starr told me: “All we have is each other.”