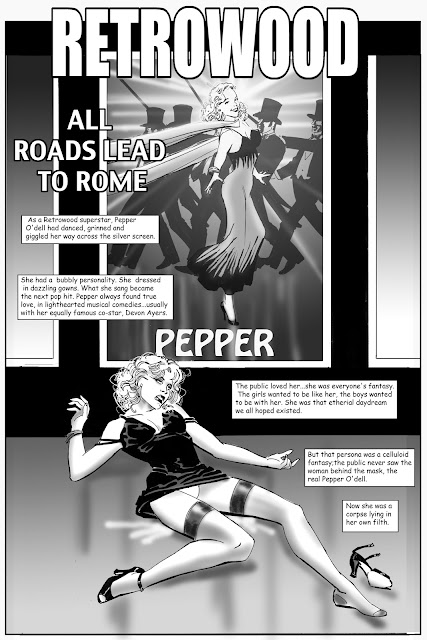 The big difference between the cartoonists of my generation and the younger set is that we all wanted to do comicbooks, and the current generation all want to do their graphic novel.  What the difference is between the two I'm not really certain.  When I was doing comics the realities of the schedule made it pretty much impossible to do a lot of revisions. However, as far back as when I started doing the first Lori Lovecraft story and with all my own creations since, I think nothing of redoing not only a frame, but pages, and entire scenes.

That's pretty much the case with this Retrowood story, All Roads Lead to Rome. The splash page is a perfect example. In the thumbnail I wanted to create a juxtaposition of the glamorous life of the movie idol Pepper Evans against the ugliness of her corpse. This was what I was working toward when I did the pencil study. 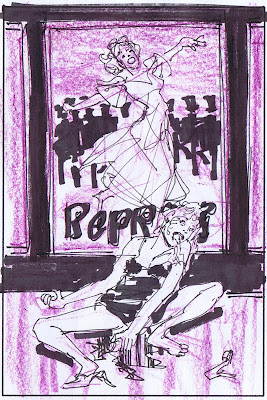 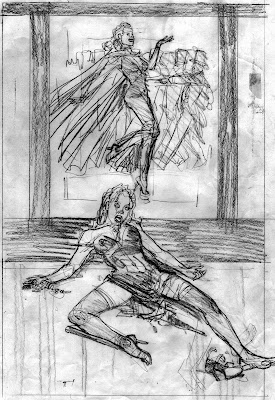 The movie poster in the background didn't quite work for me in the penciled versions I originally tried, so I moved Pepper so that she we moving against the tuxedoed chorus. I wound up using her figure from one rough, and the chorus from another. 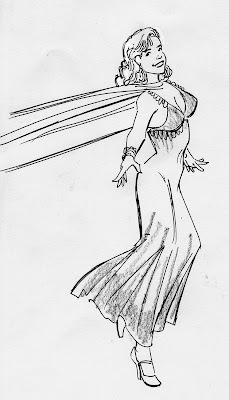 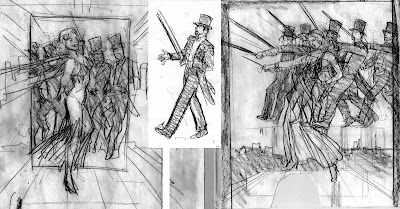 At this stage I wound up inking the pencils and putting the elements together in photoshop. Below is the inked version and the original sepiatoned finish. 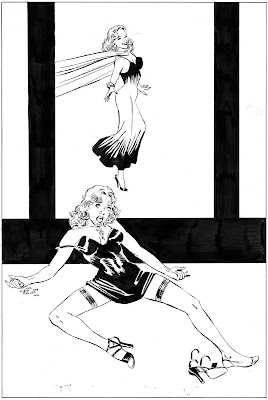 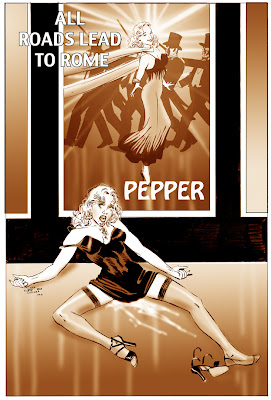 The pages sat in my drawer for months before I had a chance to get back to the story. And then I wasn't happy with the central figure of Pepper. So I tried a couple different alternatives in pencil, inked up the version I thought worked best, and pasted it into the final art. Then I've added the lettered text (which will probably change a bit in the final copy), and page one is finally finished....for the time being.

And I still have to add that damn bottle of sleeping pills. 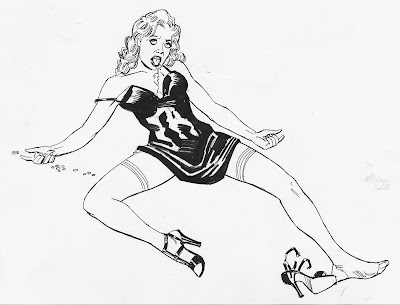 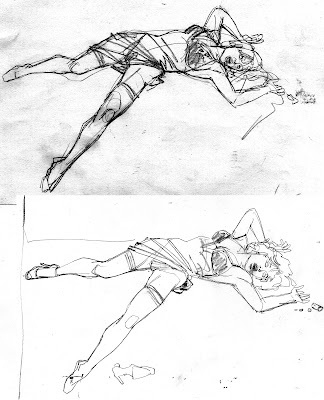 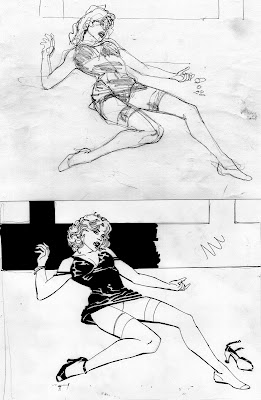 My friend Frank Forte has brought me into the fold at Asylum Press and all of the Lori Lovecraft and Retrowood stories are now becoming available in digital versions...and for much cheaper. 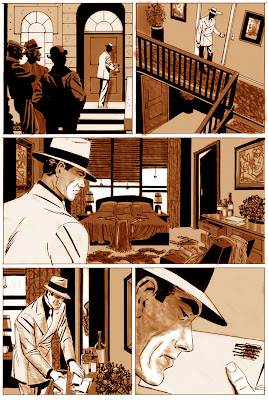 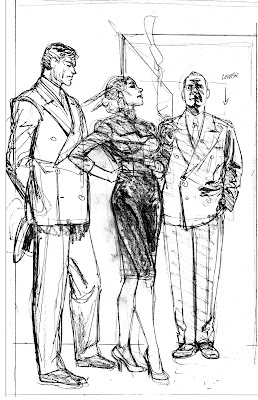 For the last few months any spare time I've been getting I've spent working on another Retrowood story, All Roads lead to Rome.  Consequently, I haven't had much time to do any painting or illustrations, and trying to plan new posts for this blog has pretty much come to a standstill. I've decided the simplest way to remedy that is to simply start posting my progress on the Retrowood story. So what you get for the next several installments is a whole lot more visuals, and a lot less words.

One of the main characters in the story is Domino Mueller, a loose attempt at Marlene Deitrich. Since one of the themes is the masks that we all wear, and screen idols in particular, hence the name Domino, which means mask. This one also features a Fred and Ginger pastiche with Pepper Evans and Devon Ayers.

I think I plotted this one out eight or ten years ago when I was first planning the series, and the thumbnail version I did was actually slated for the first J. Parker Wrighte adventure. But, things change. When I finally got a rough version of the script worked out, I realized that my words would be squeezing a lot of my pictures…so I decided to expand the story from 48 pages to 64. Even though I had a lot of the frames pencilled, it was too difficult a process, since I really added very few additional frames. In most cases, I simply made some of the pictures bigger, and saved any new pictures for where the story really needed the clarity. 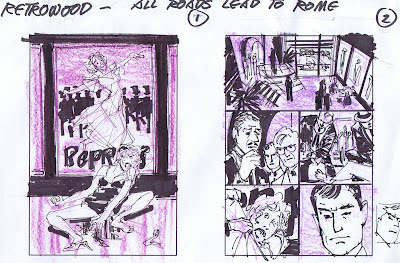 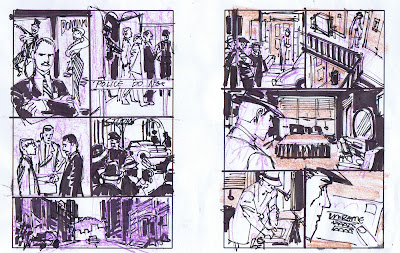 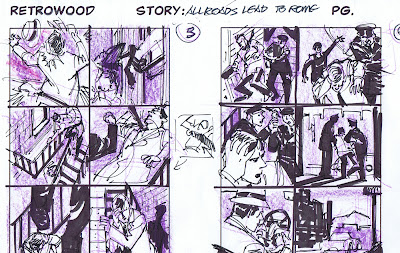 Here is the amended versions stretched to eight pages. 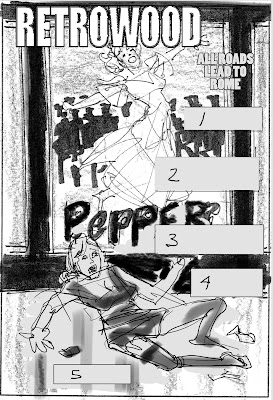 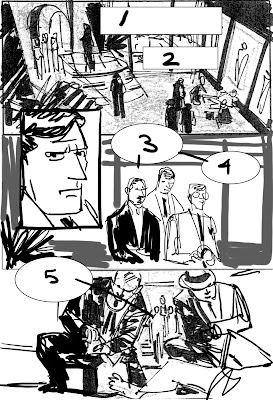 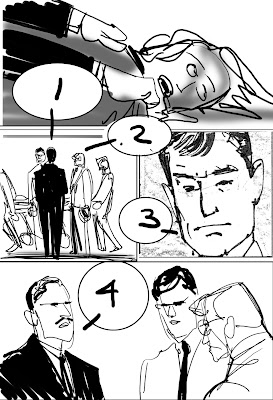 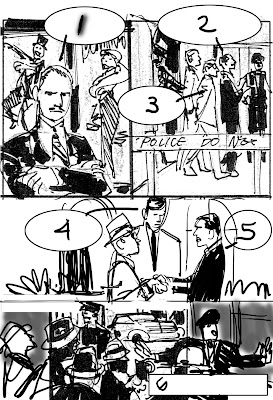 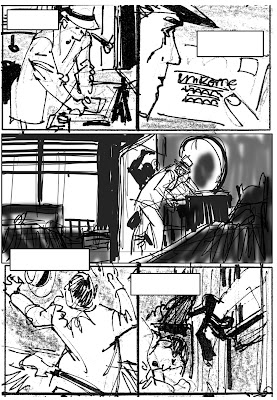 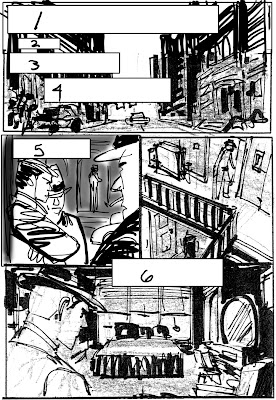 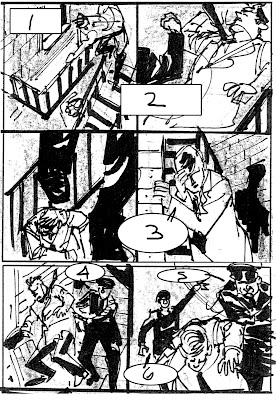 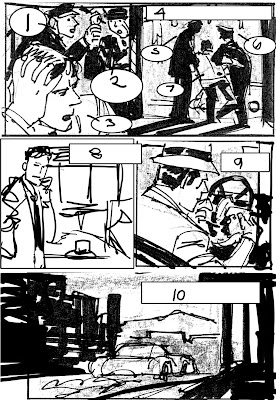 And as a bonus here's a birthday/Christmas painting I did for my lovely wife Annie. 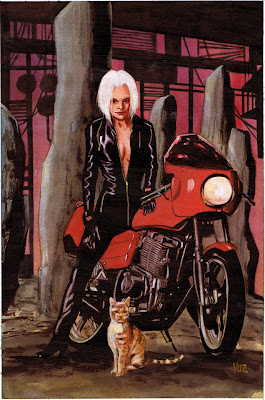