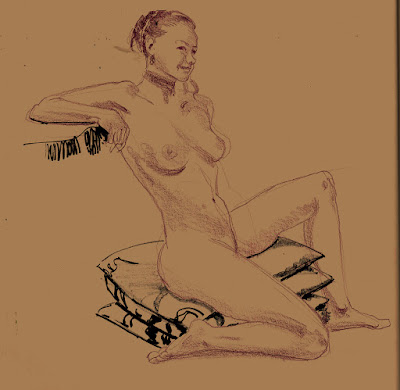 You've heard me say before that while there are any number of things that I love about living in southern California, we certainly seem to blessed with a large number of figure models with great beauty, poise, and talent. Some of this is due to living in the entertainment capital, where there are always a number of young ingenues looking for extra work. I think it's also due to a larger extent to the organizing efforts of Jennifer Fabos and her circle which have brought a new level of professionalism to the workplace. And part of it is simply being in a creative environment where excellence fosters a greater excellence. 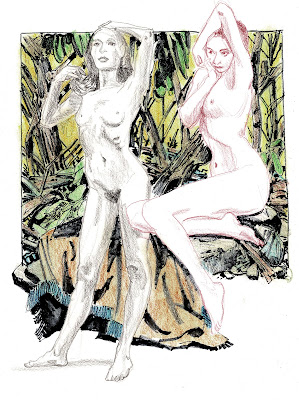 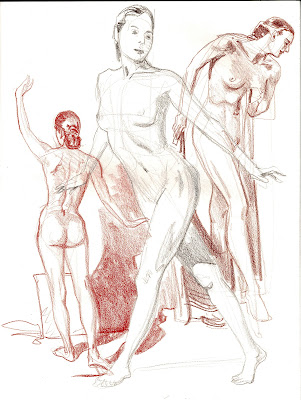 Most folks seem to think that "just getting naked" is all the model does. What's so hard about that? Have you tried it lately in front of a group of people? It takes a courage and confidence most of us don't have. 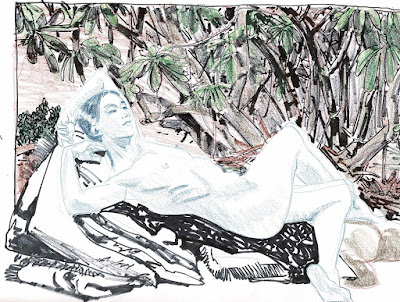 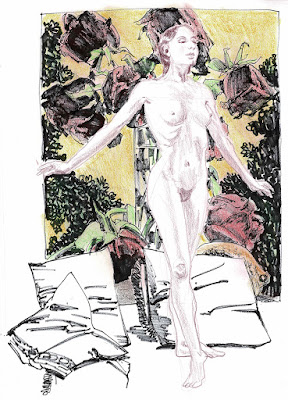 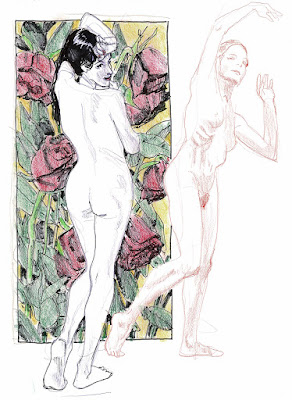 And then there is the patience and the stamina. Try just sitting still without moving while in front of your mirror. It isn't easy. Now strike a dynamic pose and hold that for twenty plus minutes. The sessions with quick poses are even tougher. You need to be a dancer or athlete to even attempt these. You also have to have a repertoire of dozens of poses so that you don't repeat yourself as you're quickly segueing from one position to another. 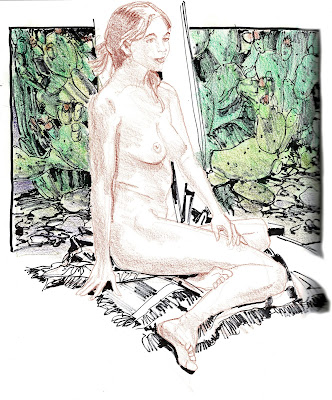 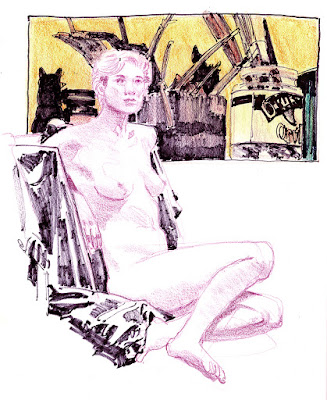 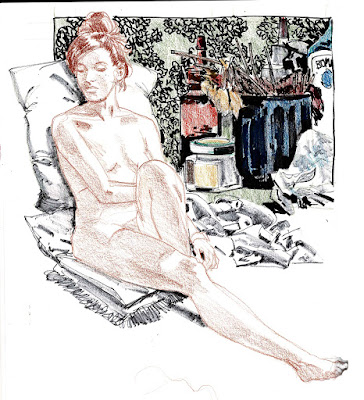 Good models don't just stand there. They bring a use of gesture and attitude to the pose that conveys a dramatic element. Sometimes as artists we'll make suggestions, but the really great poses always seem to come from the mind of the model. It is performance without motion. 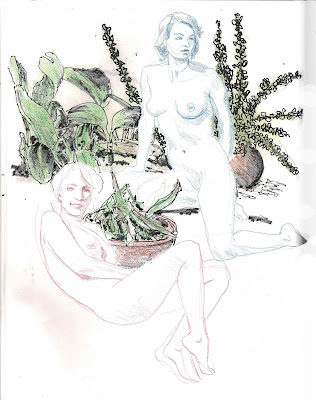 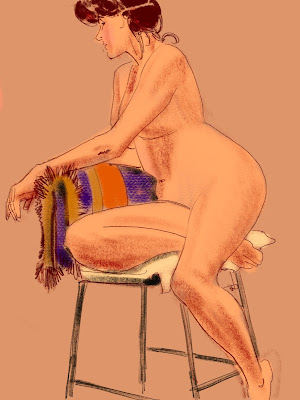 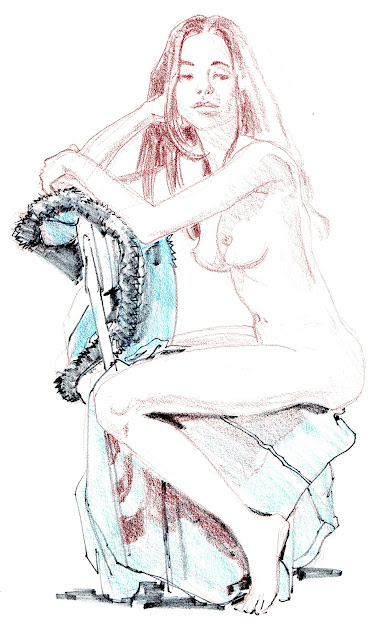 Models will also make great use of drapery and props to bring an emotional element to the pose.  Serious models have a strong sense of costume and situation and bring bits of there own personality into posing. (Most models have their own collections of "favorite" costumes for posing.) 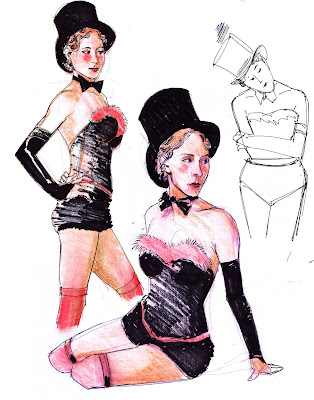 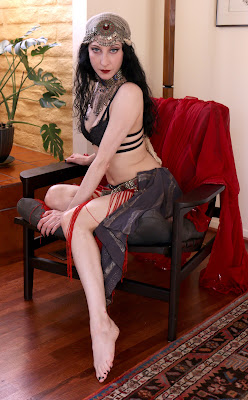 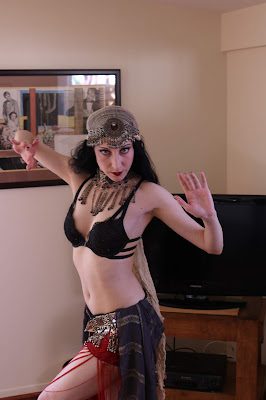 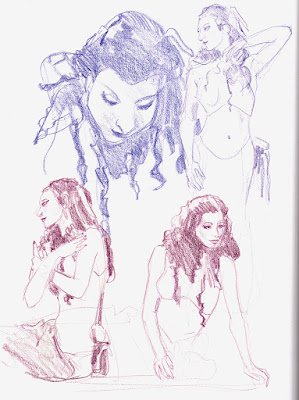 Of course my pet peeve is why so many models leave their hair tied up in a bun while they are posing. As my friend Bill Stout often exclaims:"Don't they understand the power of hair." A few years back we had a beautiful blond model named Misty who came in a Marilyn Monroe dress and wowed us all with a series of poses. She happened to mention near the end of class that underneath her curly wig she had a full head of long blond hair. When she took the wig off the immediate reaction was why were you hiding this. She ran off and got married, and we all miss her. 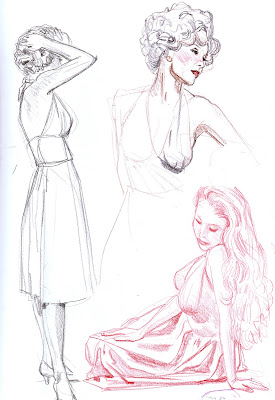 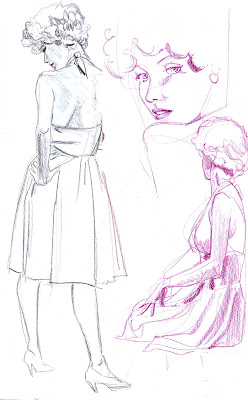 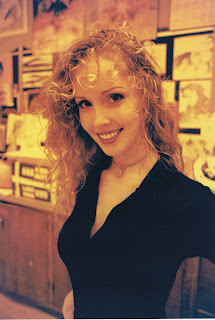 Recently a couple of the younger models have been coming into class…. to draw. They are both taking classes in  the process of drawing storyboards. My own reaction is that if they bring any of drama, creativity, discipline and personal statement that they exhibited as models to telling a story, they are sure to succeed. 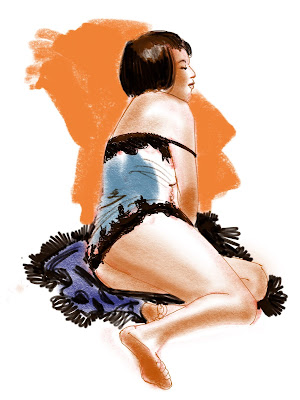 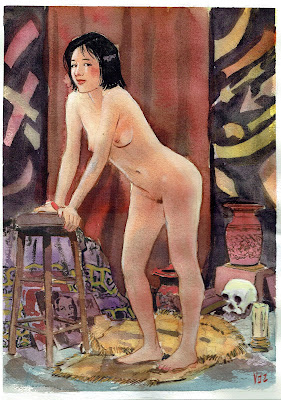 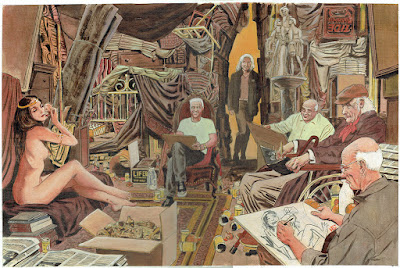 It's been a couple of years since I posted this blog originally, but I still continue to attend the life drawing sessions as often as possible. Jennifer who had really organized the models in the area has moved to Oregon, but still returns at least once a month for events. The talent of these women goes far beyond just posing as life models. There is the Turkish lady who is an award winning filmmaker, the naturalist who always brings her pet lizards, the ageless Sarah who continues to inspire us, Cassandra who now works as a performer in New York, as well as the opera singer and Marisa who sings in a 40's band, Janet who writes for an LA paper, the amazing cartoonist Linda, and  even a  school teacher. Still, with all of these, my favorite model remains my beautiful white haired teenager, my wife Annie. 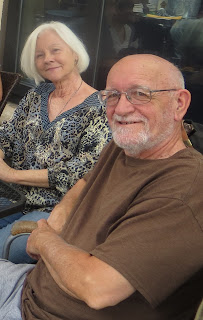 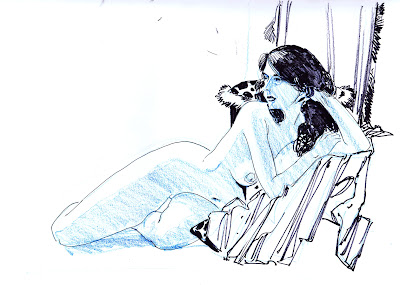