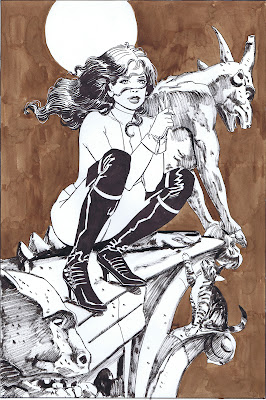 I really love comics; they're what made me want to draw. I've never thought of myself as an artist, always a cartoonist- a storyteller.

For the first time in my adult life I don't have any kind of a comics project that I'm working on in any form. The irony is that when I was younger and wasn't very good at what I did, I always had lots of work, but as I acquired skill and taste, the jobs got harder and harder to find. 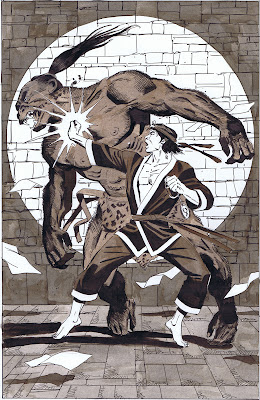 Part of that is the reality of working in any form of the entertainment business. A bigger part is that commercial comics as an industry died in the early 80's. There are still a lot of folks living off the carcass ( especially in the movie industry), but no one does comics just to make money off comics- because there is none. It's all in the ancillary income.

I don't think I've had half a dozen paying jobs in comics in the past twenty years, but I still remain enamored with the art form. There isn't an instant's regret for the all the unpaid time I've spent on my Lori Lovecraft and Retrowood projects. Most of the commercial books I worked on in comics I always thought were crap- but I'm extremely proud of my independent work.

But the work is intensely demanding. And my energy level isn't what it used to be. If I continue to work on comics, the reality is that I don't have either the time or energy for anything else. And the bottom line has really nothing to do with money. The reality is that I simply don't have the passion required to produce the material anymore, or the outside stimulus to keep at it. I don't want to just do comics; I want to do  better comicbook work than I have ever done before. I just can't see that happening in the current circumstances. 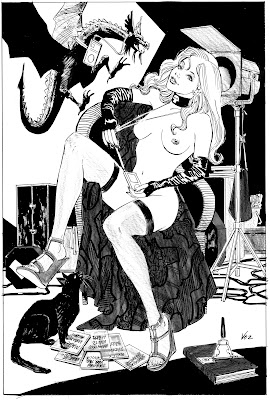 While I never say never, I am hoping to take a bit of a sabbatical from comics and work more on my illustration- which is another labor of love with a minimal monetary return.

But it sure is fun! 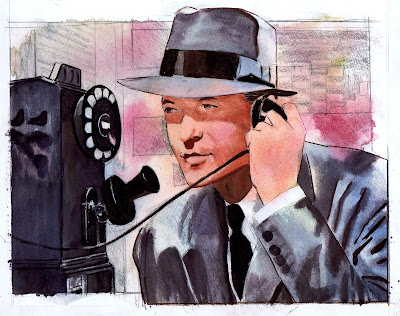 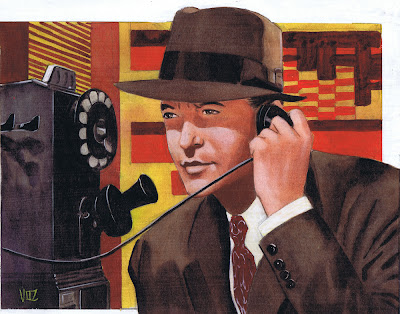 So here are my latest finished pictures. First there is George Sanders as Gay Falcon, as I mentioned previously the first adaptation of a Raymond Chandler novel (Farewell my Lovely) for the screen. It's always a bit of a problem doing color versions of characters who were filmed in black and white (although it was a process that was used all the time for lobby cards and movie posters). And likenesses are also tricky. It's not enough that your drawing/painting looks like the person, it also has to be immediately recognizable as the person. And the best part of George Sanders was that wonderful voice, which you can't draw or paint. 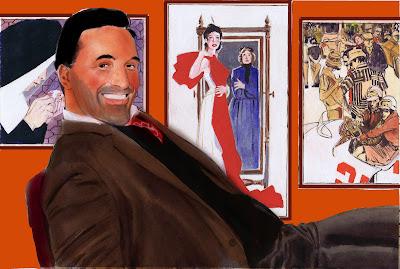 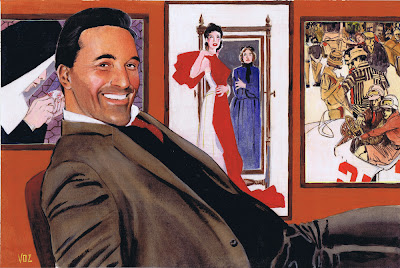 There is also my homage to Jon Hamm as Don Draper of Madmen. It might have worked a bit better if I had Mr. Hamm in a 60's Brooks Brothers suit. But the tribute is as much to the wonderful ad art of that era. It gave me a chance to do some studies of  Al Parker, Coby Whitmore and Bob Peak for the background. I kept the overall color scheme (which I worked out in Photoshop at an early stage) very warm, with a few cooler neutrals, similar to the Sanders picture. 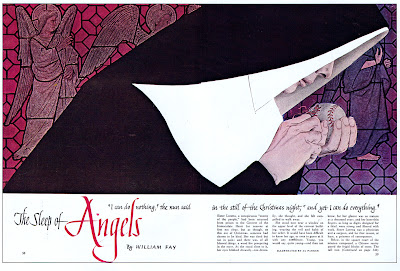 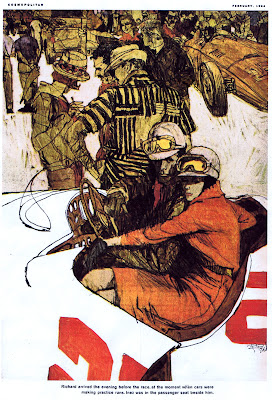 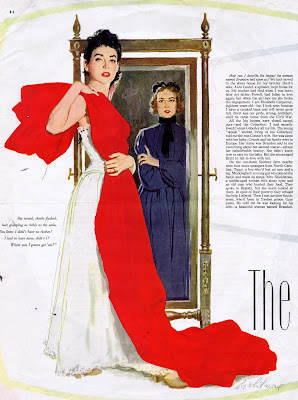 (Above were the three illustration I copied from Al Parker, Bob Peak, and Coby Whitmore.)
And of course, there is another watercolor- one of my former cats Jezebel and Sand Serif. 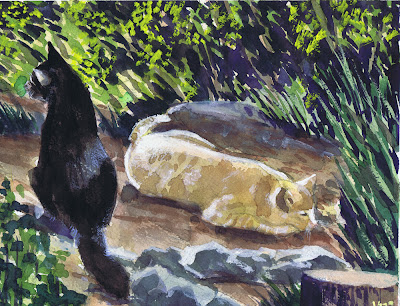 Next it's on to a portrait I've started of Bill Nighy, and another of Barbarella visiting Falling Water.  I can't wait; actually I won't. As soon as I'm done typing this blog it's back to the drawing board.


[Blogmaster's Note]: If you're having some trouble with certain elements of the blog, like checking out older posts in the Archive, it may be caused by issues with the newest version of Firefox. Try Explorer or Safari.
Posted by Voz at 2:29 PM 6 comments: 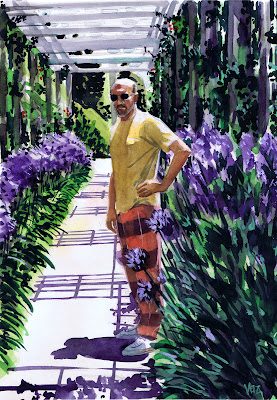 Lately the job I was doing and a lingering cold have completely destroyed whatever schedule I was trying to keep on this blog. But since the job has ended and the cold is finally not getting any worse, maybe I can get back to posting again on a regular basis. 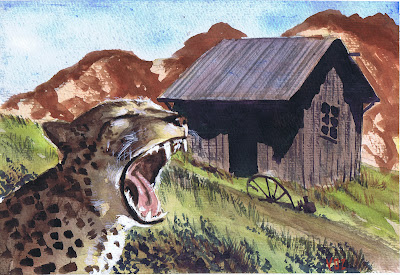 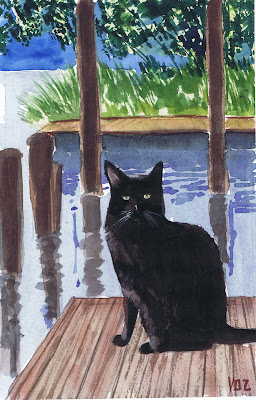 For now I'm just going to stick up what I've been working on the past couple of weeks. Inspired by friend Norman Mallory, I tried doing a watercolor portrait. Actually, I started this thing four or five years back and it just sat on the shelf unfinished. I finally pulled it back out and jumped in and finished it up. The big thing I apparently learned in that time was start working with a lot bigger brushes. 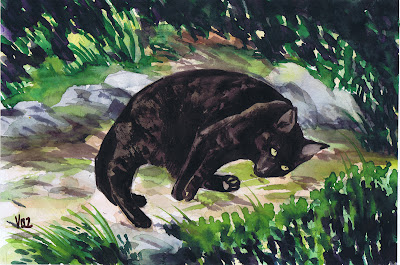 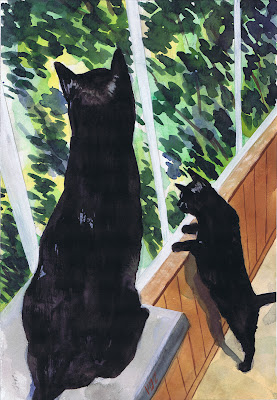 There are some new kitty paintings. I never get tired of drawing my feline friends. And they charge so little for modeling fees. 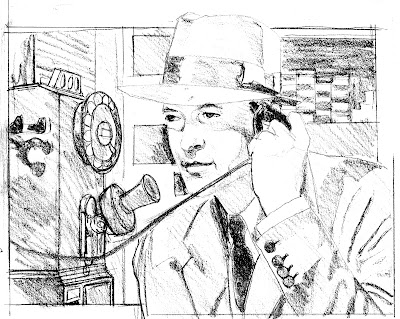 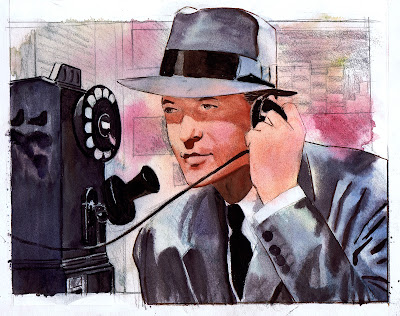 There are also a couple of pieces in progress. Here are the pencilled versions of portraits of Jon Hamm and the original Saint, George Sanders, who also was the first actor to play Raymond Chandler's Philip Marlowe. Of course he wasn't called Marlowe, but Gay Falcon, in the l940's "The Falcon Takes Over", the initial adaptation of "Farewell, My Lovely. There's also a version of the two pieces at there present stage. 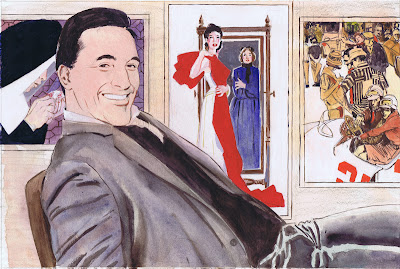