E. A. Abbey in Color 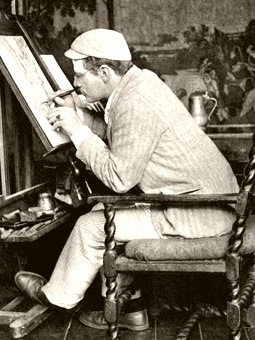 When I was living in Kalamazoo, MI, my  friend and neighbor Jim “The King” Wellington had a print hanging in his front room that always blew me away when I would see it.  The picture had three women, one in black, one in red, and one in white, standing and looking at each other. It was rife with symbolism, infused with drama, and handled with a mastery of draftsmanship and painted in a classical style. While I never could get Jim to part with it, he was gracious enough to lend it to me for an extended period of time. 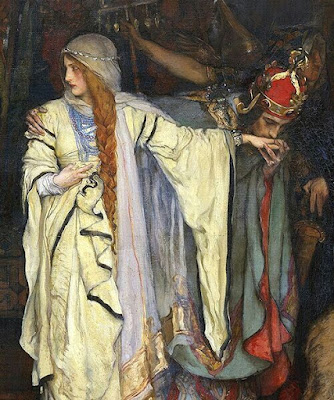 These were pre-internet days and being fairly ignorant of illustrators and paintings, I had no idea that the artist was Edwin Austin Abbey and that the picture itself, a scene from Shakespeare’s King Lear  featuring his three daughters, was quite famous. Before I returned the print to Jim, I do remember using one of the central figures as a character in the Sisterhood of Steel comic I was drawing at the time.


Ten years later when I was working on HBO’s Tales From the Crypt they were shooting at the Mount St. Mary’s University library. The room was dominated by three different mural forms Shakespearean plays. One look and I realized this was the same artist who’s work had stunned me a decade before. Fortunately, when I mentioned the work to my good friend Bill Stout, he immediately explained to me whose work this was. 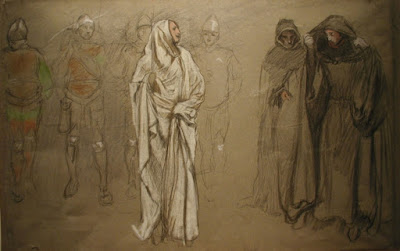 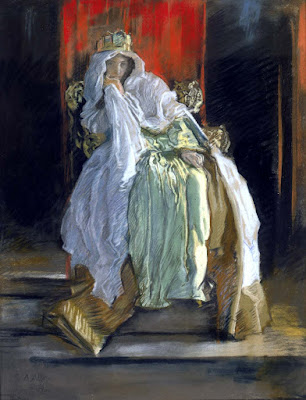 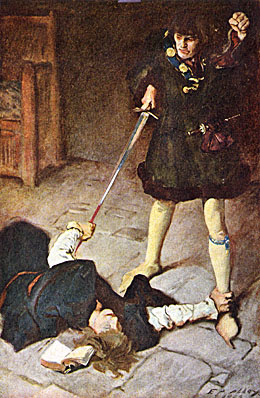 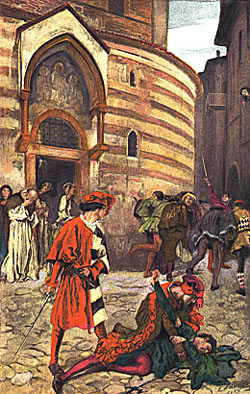 Working in the latter part of the nineteenth century, Abbey was famous for his intricate pen and ink drawings done for Harper’s.  Full color reproduction was a luxury at best, so linework dominated the drawings done at the time. However, Abbey was also involved in designing sets and costumes for a number of Shakespeare’s plays as well as producing several large murals featuring literary subjects, and these are the source of most of the color work presented here. 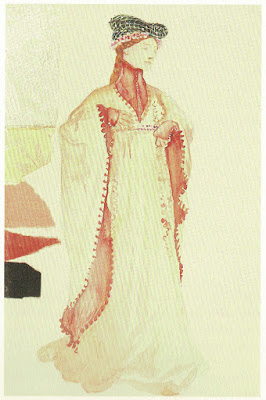 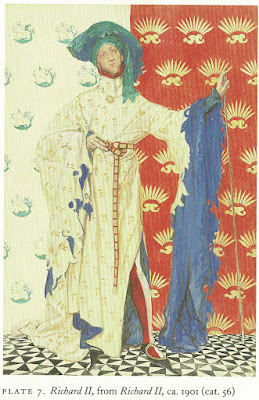 (The Abbey bio below is from Arpi Emoyan's excellent book on Hall of Fame Illustrators, Famous American Illustrators. A must for your book collection.)

Edwin Austin Abbey (1852-1911)
The brilliant draftsmanship of Edwin Austin Abbey's pen and ink drawings were perfectly suited to the reproduction techniques of the late 1800's. His genius as an artist was further established when he began working in other media as well- watercolor, oil, pastel- and swiftly mastered them all.

A major contributor to the "Golden Age of American Illustration". Abbey was held in high esteem by art establishments on both sides of the Atlantic. Living in England as an American expatriate, he became a full member of the Royal Academy, painted the coronation of King Edward VII at the King's request, but declined an offer of knighthood in order to retain his U.S. citizenship. 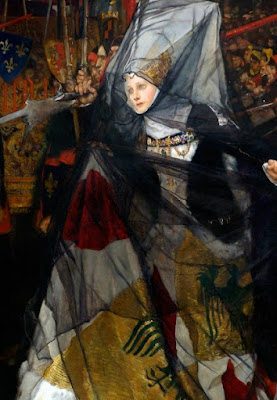 Growing up in Philadelphia, Abbey attended the Pennsylvania Academy of Fine Arts and began illustrating books and magazines at the age of 16. At 19 he joined the staff at Harper's, concentrating on English scenes and Shakespearean works. A trip abroad in 1871 made him realize that England was a great source for authentic props, costumes, and backgrounds for his historical illustrations. He returned there seven years later to take up permanent residence. 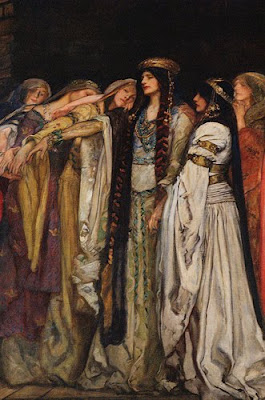 Even his enormous murals for the Boston public library and the State Capitol in Harrisburg, Pennsylvania, were painted in England. The Capitol murals, for which he paid $25 per square foot, are now valued at well over a million dollars. 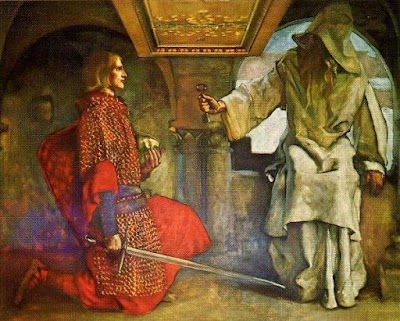 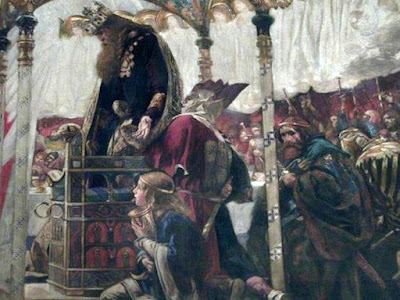 Abbey died in London in 1911, leaving behind an unfinished mural and a large collection of exquisite pen-and-ink illustrations. Today the Yale University Art Gallery in New Haven maintains the worlds largest repository of Abbey's works.

For more on Abbey, you can check out the link to Wikipedia  (https://en.wikipedia.org/wiki/Edwin_Austin_Abbey, or track down the volume Unfaded Pageant by Lucy Oakley at Amazon.com.

The Staging of Macbeth PT. 2 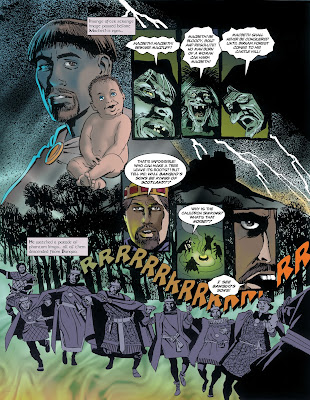 If you done the proper preparation with collecting research, working through all the storytelling and compositional problems, and drawing the pictures with a sense of drama and correct draftsmanship, the actual finishing stage is in some way the simplest part of the job. It is the icing on the cake; if it is finished poorly all the preparation is for naught. 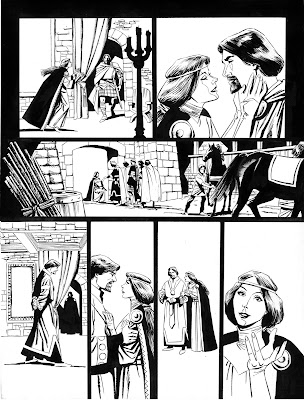 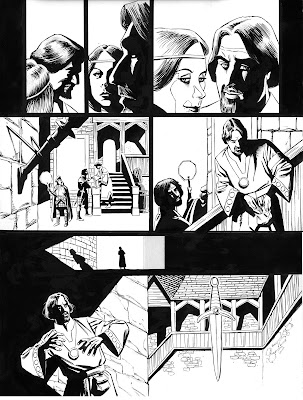 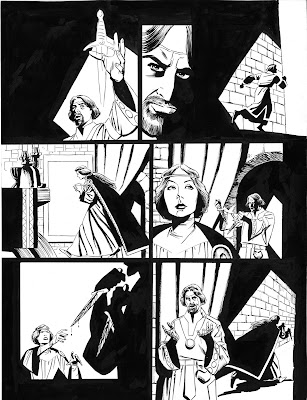 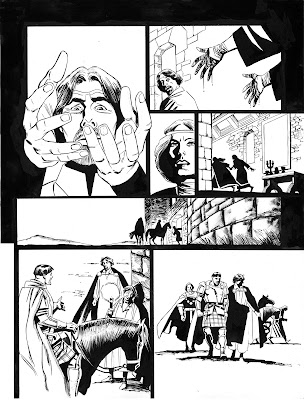 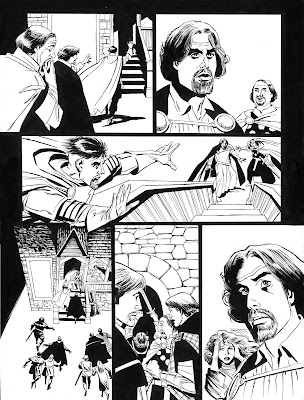 You have to remember that inking is more than just tracing off your pencil drawings. (In this case, I already did this by copying my pencil roughs onto bristol board, a surface tough upon to take the use and abuse of pen and ink.) With the inking stage you are transforming the mass of gray shapes into a cohesive statement in high contrast black and white.

It is very much a painting process where you are using the india ink as your medium. Every time you put in a line or add a bit of black, you have to continually interpolate the rest of the composition accordingly. I find on a lot of jobs I like laying in the black areas first, and adding only the necessary minimal amount of line necessary. I don't have any dogma about what should or shouldn't be done first. You just have to dive in and keep moving. 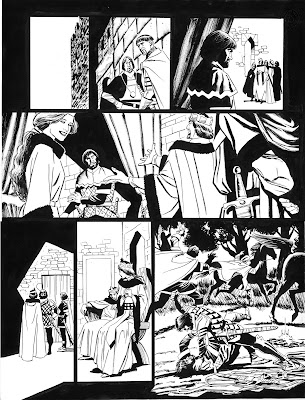 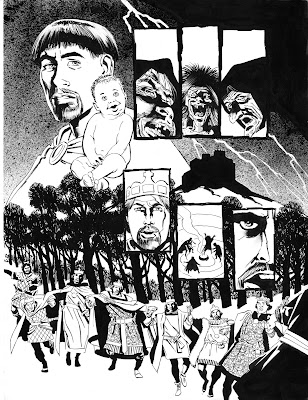 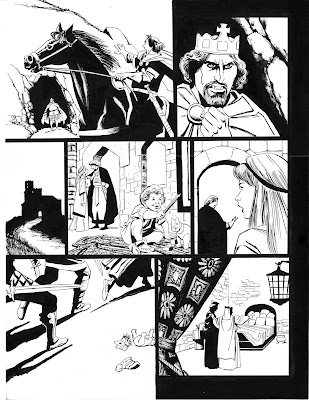 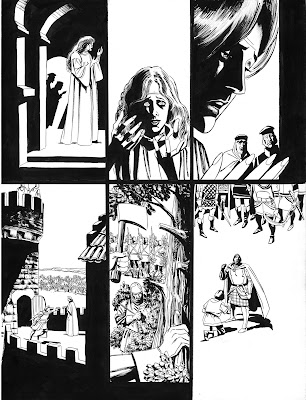 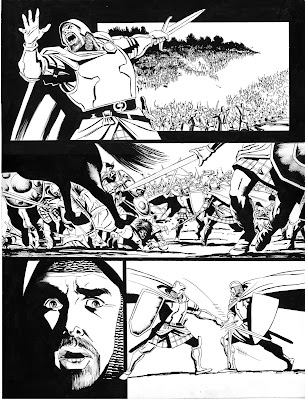 My background in comics taught me the necessity of having a very slick line in this stage. My experiences in doing illustration forced me to unlearn that concept and to let your drawing create the line that you use. So while I still admire those with the amazing facility with pen and brush lines, I don't seek to emulate them as much. 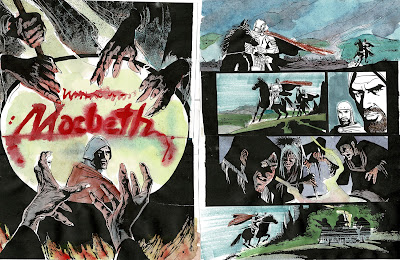 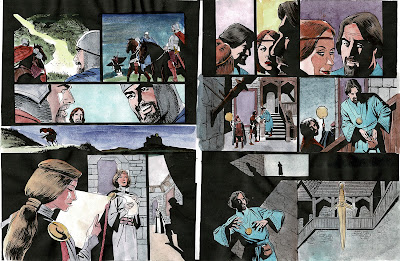 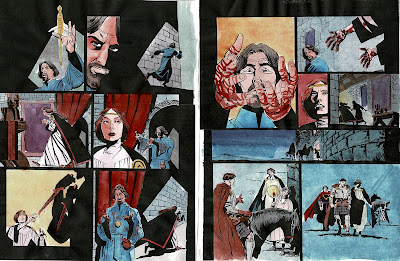 The last stage of this job was creating color guides for John Ott to work with. First off,  John is an accomplished colorist and he certainly could have done an amazing job without any input from me. Because I had a lot invested in this job, I wanted to give him a sense of what I wanted to see in the finish. He certainly took what I gave him and went far beyond my suggestions. Certainly one of the best color jobs I've ever had on a comic book project. Take a bow, Mr. Ott.  John also handled the lettering chores, and after balloon placement, I had the good sense not to give him any input here. 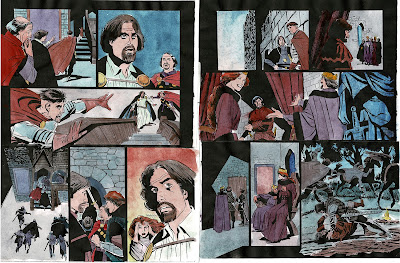 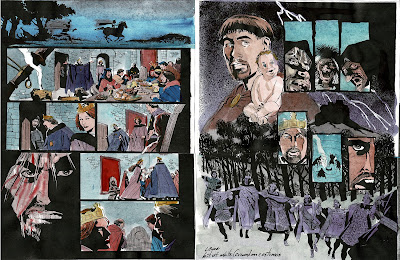 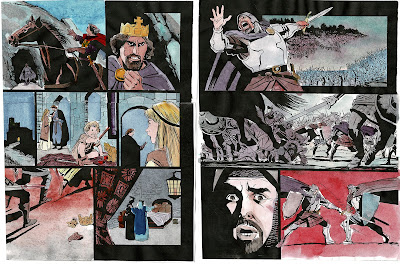 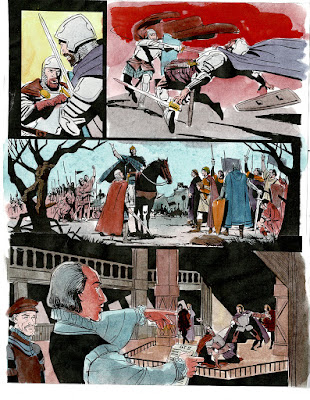 So there is your graphic story from start to finish. It's always a task that is infinitely harder than you ever think it will be, but it also has it's own special rewards when you see it finished. That must be the reason why I still continuously  crank out my own comic books as a hobby long after I've given it up as a career.