Why We Lose Out on Jobs 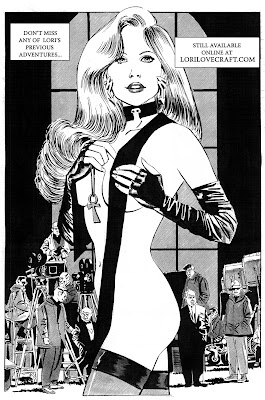 "I wish that I knew what I know now, when I was younger"  OOH LA LA   Ron Wood/ Ronnie Lane

In the competitive world of commercial art there are thousands of reasons for being passed over on a job. Race. Sex. Ageism. Religion. Politics. Style. Dress….just to suggest a few of the semi-logical ones. When you lose out on a job, it's easy enough place the blame on exterior issues that are completely out of your control. And often, that might be entirely correct. But after you get over consoling yourself with whatever explanation you can come up with of why the world has it in for you, it's time to answer the more difficult question: What could I have done to give myself a better chance on this job? How do I need to change and improve my approach next time? 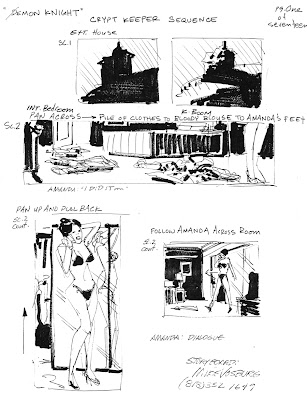 When I was working on the Tales From the Crypt TV series, my goal was to break into storyboarding for live action. I had worked in animation for a number and years and knew the routine for that fairly well, but live action was an entirely different story. I didn't know anyone who worked in this area other than a couple of animation folks who had picked up a few jobs doing low budget films. So working on Tales was a godsend. I was surrounded by the best directors in the business. It seemed a no-brainer that I'd soon be working regularly for them once they saw what I could do. 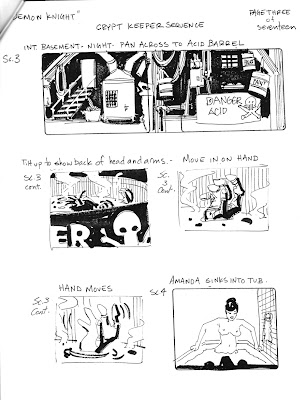 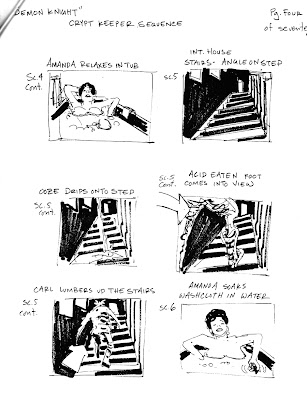 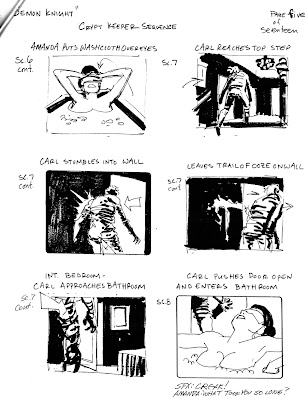 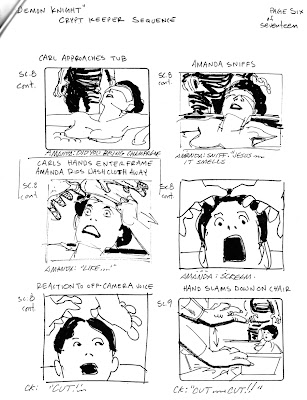 And I had my chances. I worked on a segment with Robert Zemeckis for a TV project he had planned. I did extensive board work on one of the crypt episodes for John Frankenheimer, and also a few action sequences for other stories during the run of the show. But it never led to much. While I was reshuffling some files around my studio last week I came across some of the boards I was doing at that time, and suddenly a lot of things made sense. Quite frankly, when I did have the opportunity to do live action boards, I was giving them crap. 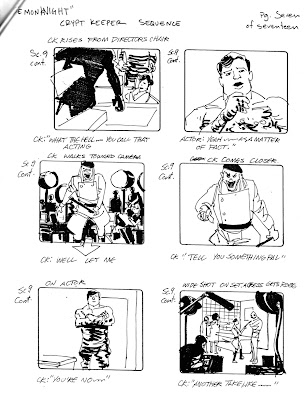 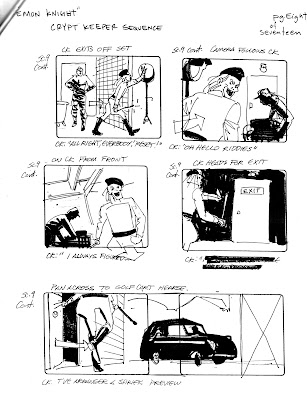 The biggest problem was that I was far more interested in showing the directors just how fast (and cheap) I could work, rather than trying to produce the highest quality material possible. While my knowledge of the technical aspects of film was limited, I could draw extremely well. But I certainly don't see any of that proficiency in the boardwalk I was doing. Part of that I can blame on animation; there was the attitude that if your boards were too well drawn it was to cover up your other defects. The bottom line was that I could have improved the work several times over if I had put as much time and effort into the drawing (and composition) rather than hacking it out.


The second shortcoming was that I didn't seek out some of the excellent live action board artists and ask them to critique my work. There were certainly enough of them in LA if I wanted to track them down. But again, I was working regularly in comics and animation and getting a great reception. I wasn't hungry enough to seek out another path and pursue it; I was waiting for directors to call me and have the jobs fall in my lap. That simply doesn't happen.


Thirdly, when I was working on the projects, I simply allowed myself to be a wrist. I put down in the frames what they told me. I didn't realize that I should have been more involved in the thinking process and making suggestions about how the work could be shown. I should have gotten rid of a lot of my reticence.

And for all the shortcomings, the boards are still solid material. They tell the story clearly, are well composed, and were what the director wanted. But looking at them now through the eye of experience, my advice to myself would be: Slow down. Go to your strengths and show them how strong a draftsman you are. Punch up a few of the compositions. And most importantly, make the finishes much cleaner and prettier.


There are always monetary issues on jobs. (That's why they call it "commercial" art.) One of the jokes older artists are often amused by is the clients line: It will look good  on your resume. Or the even funnier: We don't have much money now, but if the project is a success, we'll take care of you. But when you are first starting out in any business, if your attitude is to only give a client work that reflects what they are paying you, you are shooting yourself in the foot. Too often jobs where you give a less than stellar effort are eventually seen by someone who mentally writes you off their list of someone they'd like to work with. Once you accept a job, even if the pay is demeaning, never give anything less than your best effort. (And when your work is in demand, make sure if those same people hire you again, they pay double.) 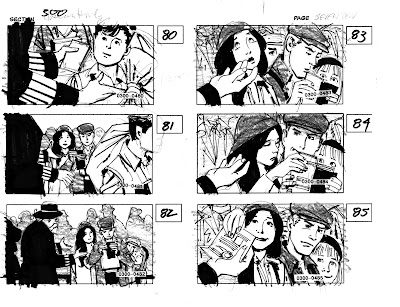 Hmmm….maybe I'll head off in my time machine this afternoon and have a talk with my younger self.
Posted by Voz at 5:41 PM 5 comments: