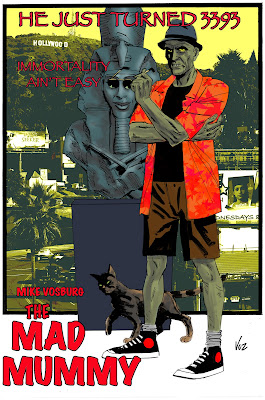 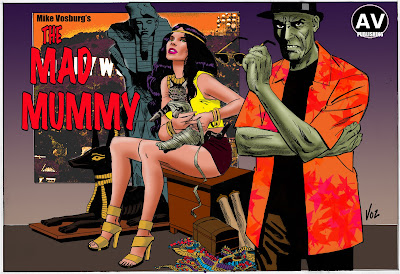 My favorite horror film of all time is The Mummy, starring Boris Karloff. And it was a movie that I didn’t see until I was in my mid twenties. The movie was made at a time when the world was fascinated with the newly discovered tomb of Tutankhamun and makes use of the art and treasure that had been brought to light. (King Tut was the son of Akhenaten, the pharaoh who will cause Aten Ra all his problems.) 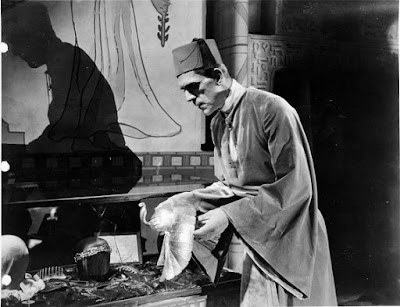 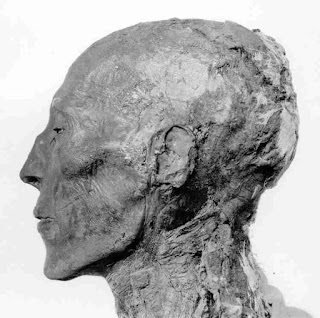 Karloff is superb in both his fully wrapped Mummy makeup, and as the living corpse Ardeth Bey. The sets and the cinematography are magnificent. Some of my most vivid childhood experiences were visiting the Egyptian room at the Detroit Historical Museum and this movie brought them all back for me. While King King, Dracula and Frankenstein were the seminal moments of film fantasy for a lot of my contemporaries, for me it was always the Mummy. So it was only natural that I would eventually do a comic book about a mummy. 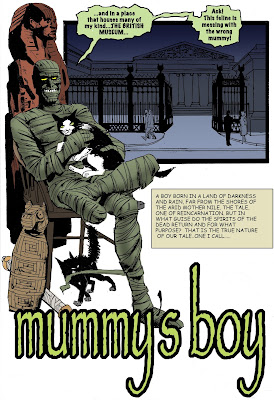 My first effort was a shorter piece called Mummy’s Boy, written by my Lori Lovecraft co-writer Pete Ventrella, which eventually was published as a Voodoo Mansion story. That still didn’t satisfy my creative lust for the character. As I thought more about the character, I understood that whatever I did, I wanted it to have to same whimsical approach as Will Eisner’s Spirit. And like that series, the stories wouldn’t always focus on the mummy as the main character. The two cartoonists who’s work really impacted me emotionally were always Joe Kubert and Wally’s Wood, so I pulled out of lot of their earlier work from the l950s when I began to design and draw the character.  And while it didn’t happen immediately, I knew that Sax Rohmer and Dr. Fu Manchu were going to play a big part in the stories. 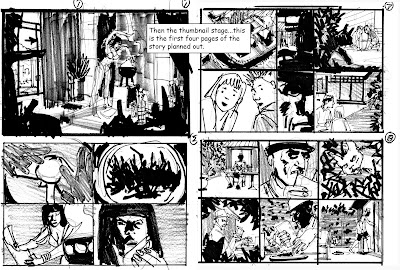 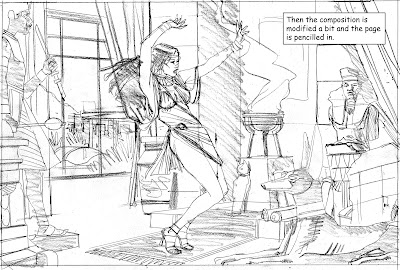 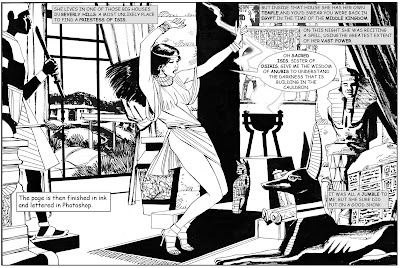 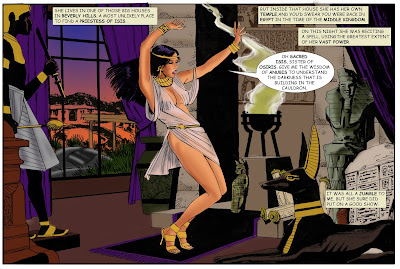 Because of the sheer amount of time involved in writing, drawing and producing a comic, I originally planned on finding someone to write the stories, and to draw the stories in my simply storyboard style. I failed on both counts on that approach as I did wind up writing all the stories, and somehow there never seemed to be any shortcuts I could take with the art. This really was my labor of love, so commerce never entered into the creative process.

Every morning my habit is to take an hour long walk up into the foothills behind my house, and this is where I did a lot of the writing and development of the characters and the story. When things would eventually gel, I’d sit down and write out a plot for the issue, and then thumbnail the entire story. After I had gathered the necessary reference I would then rough out the pages in pencil, and then trace those off onto the boards, which I would then ink. (I usually did a line drawing using a Vision rollerball pen or something similar, and then would lay in black and texture with India ink and a brush. Not having the hand of a surgeon, I tried to rely more on design and value rather than line.) The last stage was then to scan the pages in and letter and color them. Thank god I had my assistant Leyanna around to help with those chores; she was invaluable. 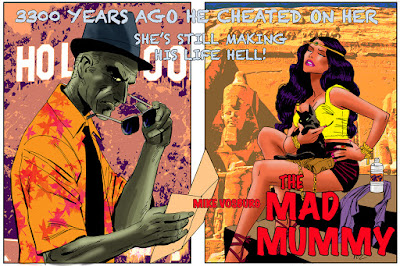 There were twelve issues in the series, which I spent a little over two years working on. They were published digitally and you can find them on sale at iVerse. (https://digital.comicsplusapp.com/product_lines.php?publisher_id=171) At one point they were also available on Comixology, but I’ve pulled them off the latter for unrelated reasons. Currently I am planning on a very limited print run of the series, which will be broken up into a series of three graphic novels.

This is not a commercial venture, as I have long since learned the folly of trying to sell books as an independent publisher. For selfish reasons, rather than rushing to computer every time I want to look at one of the issues, I want to be able to view and hold the finished product in my hand and stick it on a shelf in my library. So my initial motivation is to print up a limited number for my own use. I also need a limited number of issues to be able to hand out to publishers and for business reasons. From time to time I also get requests from fans wanting to know if there is a print edition of the books, so I’m also offering to any of you who are interested.

Because both the costs of printing and shipping are outrageously expensive, even offering this product at slightly above cost doesn’t always make it affordable to readers. Each of the three 92 page volumes will run $15, plus an additional $7 postage/handling.(Postage for  orders outside the U.S. will have to be calculated differently.) I thought about lowering the shipping cost by sending the material Media Mail instead of priority, but tracking/insurance keep this from being a realistic option. However, you are only stuck with the shipping cost once; if you order more than one of the volumes the shipping stays the same.

What you are getting for that price is a one of kind book, because I certainly don’t have any plans to print and sell this commercially. Also, you will receive a piece of signed artwork from series from one of the thumb nailed pages or a series of panels from one of the pencil roughs. While I won’t guarantee you can pick whatever page you desire, I will try and give you options. And when the original art goes on sale, if you have purchased one of the volumes you will always get a 15% discount on anything you might be interested in.

So if any of you are interested in having any of the Mad Mummy Exclusive Trade Paperback editions, send me an email and reserve your copy today. I am planning on having the books ready to ship to any who are interested by the end of May, 2017. 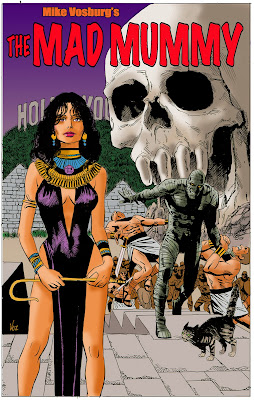 Resurrection introduces several of the main characters and establishes the relationship between Aten Ra, the defrocked high priest who is doomed to wander the earth for eternity and the reincarnation of his estranged wife, Ankhesenamun.  And of course there is a cat,the scraggy Mr. Ard...or Bast if you want to call him by his formal name. She Who Walks in Beauty which introduces another woman from Aten Ra's past, Nefertiti, and we learn more of the basis of this love triangle. Issue three continues with Atan Ra (now known as Adam Ray) settling into his new residence in the northern suburbs of LA with his landlady Agnes Harperly and her two kids Jeb and Jean. But things are never simple in life, especially an endless life, and the Mad Mummy goes into full battle mode to solve his current problem. In War of theWizards we go back into Aten’s Ra’s past after he is rudely awakened by grave robbers and tell the story about when he meets his first instructor in his study of the occult and the mystic arts. It’s not a long relationship and it’s filled with manipulation and betrayal, but it is a beginning for him in his new life. 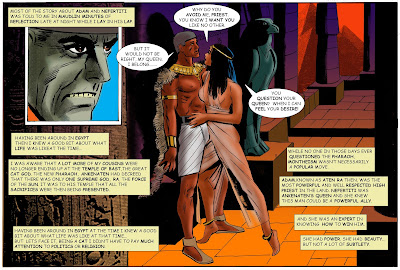 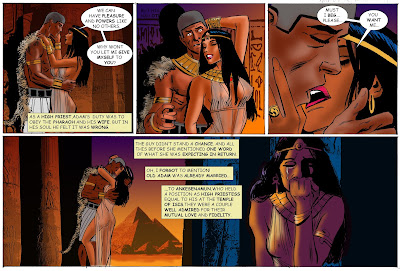 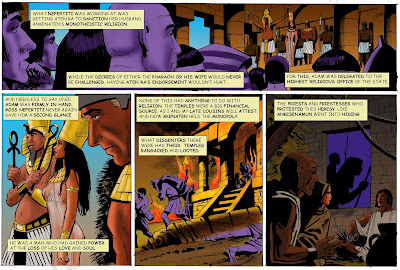 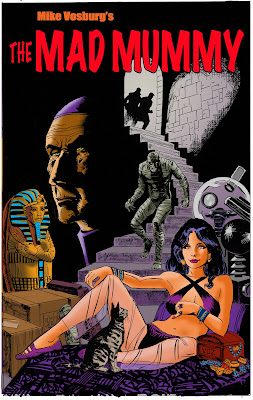 Issue five picks up his story several hundred years later when he is at the height of his mystic powers. And our narrator, the cat Mr. Ard, gets a break from his duties, as this tale is told to us by an English officer who is surprisingly similar to George McDonald Fraser’s Sir Harry Flashman. The location is China shortly after the TaiPing Rebellion. And of course we get at first look at Ming Yue/Ankesenamun’s father: a young Chinese doctor who will go on to become the world’s greatest terrorist of fiction in the early twentieth century.  In issue six, the back story of Aten Ra (now known as Adam Ray) continues in 1928 in Egypt when he once again meets the Chinese doctor, who is now extremely ancient, and his daughter Fah L Suee who is the reincarnation of Aten's estranged lost love, Ankhesenamun. The story explains Aten Ra's part in helping create the elixir vitae that restores Fu Manchu's life force. In issue seven, this triangle continues in the late 30's, and eventually reaches it's conclusion when the Chinese doctor decides to toss his daughter in the furnace for her disobedience and Aten Ra has to rush to the rescue. In the last story, Aten Ra takes Ming Yue through has past lives so that she understands her centuries old connection with him. Yeah..that ends well…and then we reconnect with in current time with the doctor has finally retired to the beaches of Malibu. 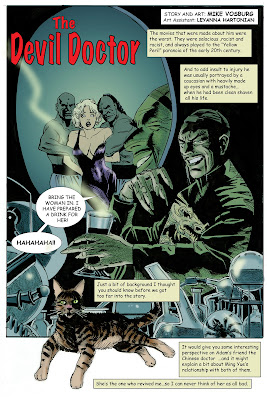 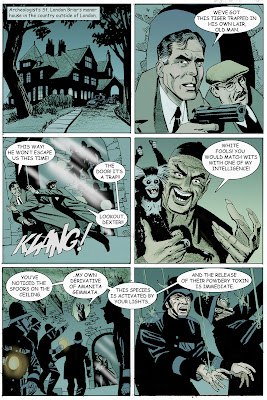 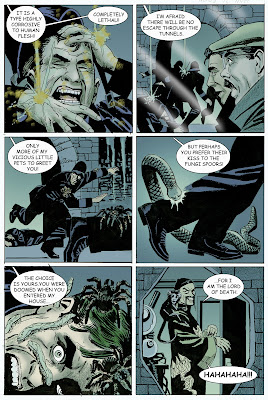 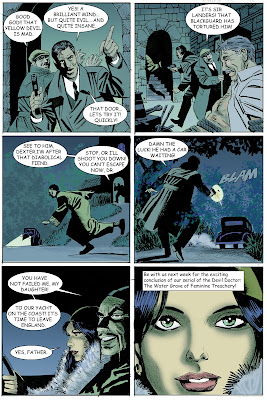 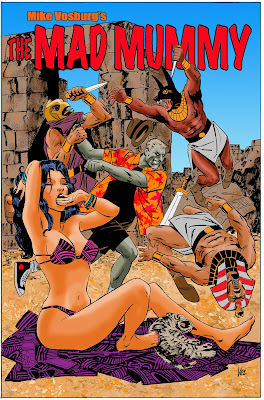 The aforementioned Mummy’s Boy story opens the book, followed by The Avatar of Bast, where a couple of space aliens help Mr. Ard learn more about his past.The third tale, Rumsheleisha’s Paw, features a twisted game of organ poker with Aten Ra playing against a  demon for the life of a child. And in Left Turn at Vine Adam has to escort an old friend to the land of the dead. 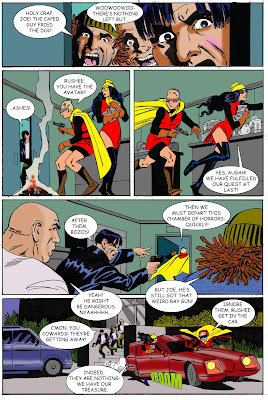 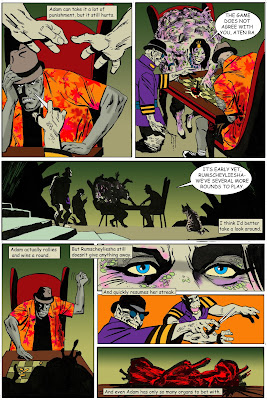 All in all lots of thrills, chills, and laughs. So if you are enjoying the series on Vozcomix or through Comics Plus, here’s your chance to have your own hard copy. The order goes in late in April, so don’t delay if you have any interest.  Contact me:VOZART@GTE.NET 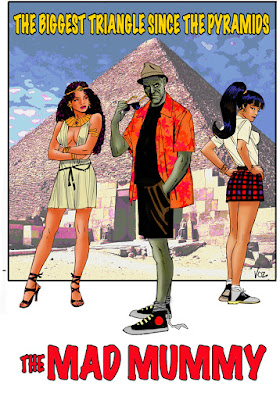