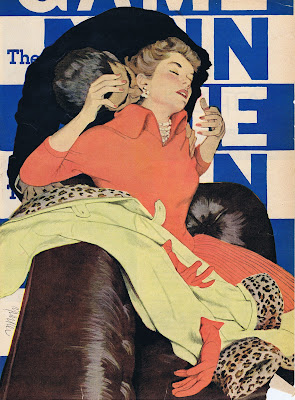 The invention of the camera shattered art in the western world. For several centuries one of the primary goals of the artist was to reproduce as realistically and objectively as possible life as he saw it. Products of the industrial revolution, artists struggled with the disciplines of draftsmanship and perspective with the ultimate goal a photographic likeness. Cameras made that approach obsolete, and 150 years later the art is still reeling from the fallout. 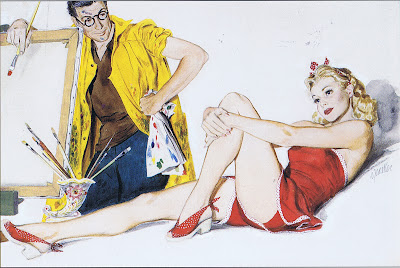 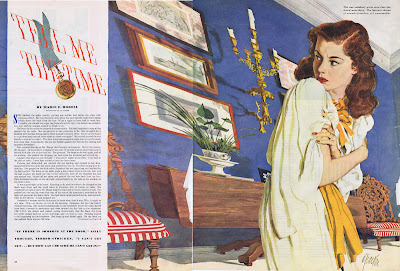 This same situation happened in the field of illustration, though it took a while until the printing industry could catch up to produce economic photography. As the process began to happen between the world wars, the magazine illustrator - once a celebrity as popular as actors and athletes- has become an endangered species. 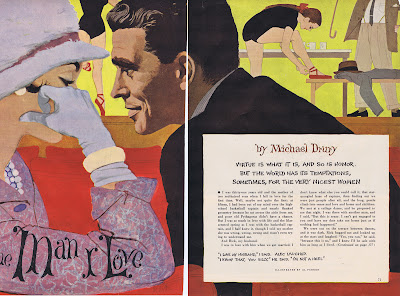 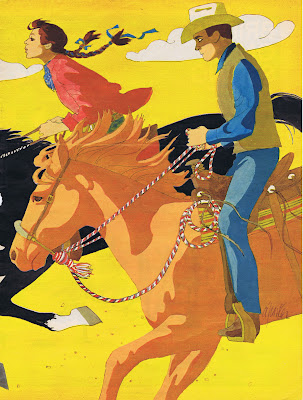 Al Parker worked, survived, and prospered through a long period of this upheaval in illustration. Witnessing the changes constantly besetting his colleagues Parker became  the greatest innovator of his era, continually altering and adjusting his style to fit the dramatically changing times. Where others copied the latest trend, Parker created them. 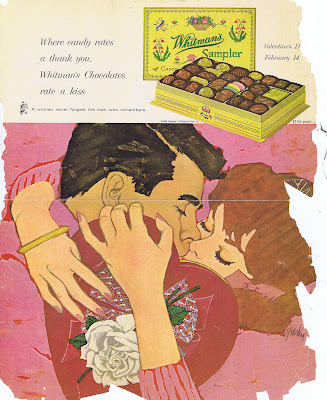 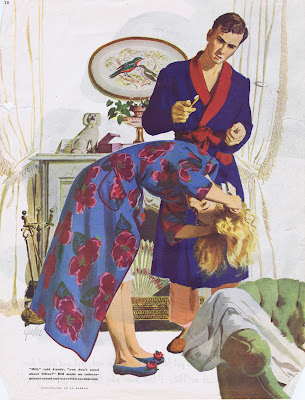 The grandson of a famous riverboat pilot, Alfred Charles Parker was born in St. Louis, Missouri. While still at the St. Louis School of Fine Arts, Parker often supported himself playing saxophone and clarinet in his own jazz band on riverboats steaming up and down the Mississippi. Louis Armstrong and Dizzy Gillespie were among his friends and although a career in music was an option,  art was his primary interest. 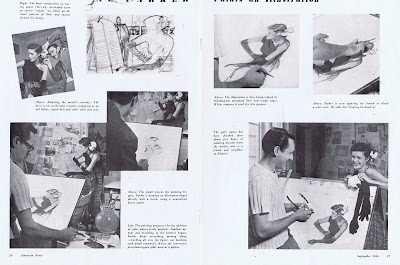 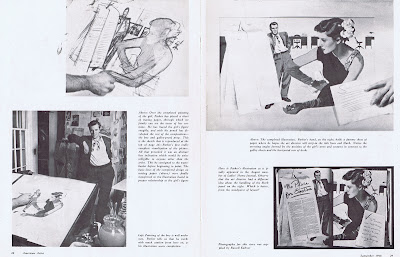 In l935 Al moved to NYC with his wife Evelyn and his family eventually settled near the NY/Conn. border, the home of many of the major contemporary illustrators .He became  a regular contributor to Ladies Home Journal, Good Housekeeping, Cosmopolitan and the Post as well as many other magazines working on both story illustration and advertising. 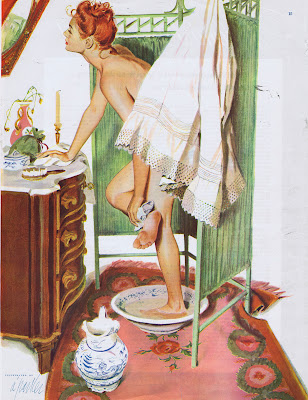 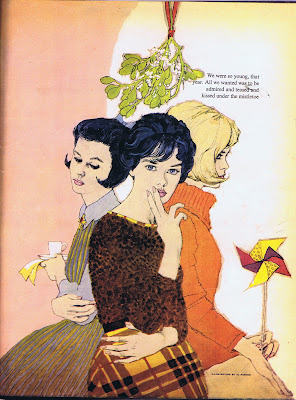 His very early work reflects an art deco influence. His brilliance was in creating “glamour”. In the 1940’s his “mother and daughter” covers, where both wear matching outfits, set a style imitated by women over the next generation. 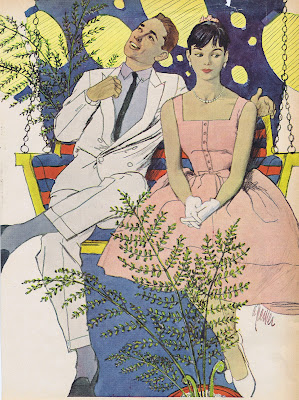 Parker worked in all mediums from oil to gouache to ink to color pencil; he was fearless in experimenting and trying new and fresh styles with his pictures. His graphic approach to design, mixing his solid drawing ability with the use of negative space and flat color, served as a jumping off point for Bob Peak, Bernie Fuchs, Ted CoConis and so many other illustrators in the 60’s. 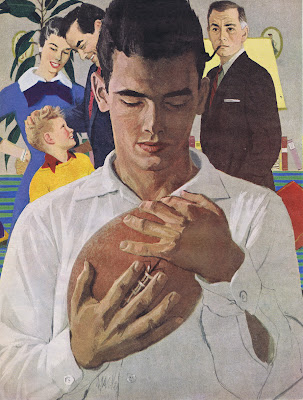 But along with the graphic technique, what has always impressed me about Al Parker was his fascinating use of the model’s mannerism and gesture. He preferred to work from life rather than photographs for this reason. His illustrations are filled with subtly positioned hands and half hidden faces, often tightly cropped, always reflecting more emotion than an overtly placed expression. 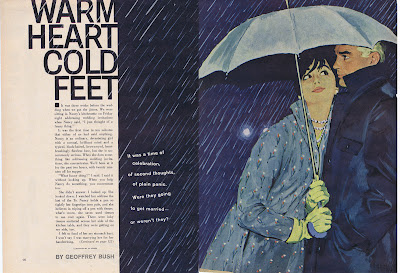 Along with Robert Fawcett, Albert Dorne and Fred Ludekens, Parker was one of the original founders of the Famous Artists School, still the best compilation of how-to information assembled for the student of picture storytelling. (Originally Parker, Dorne,Von Schmidt, Fawcett and Briggs each did separate volumes which were compiled into the final course. I have copies of the Briggs and Fawcett; anyone out there who can provide me with a xerox of the Parker, I would forever be in your debt.) 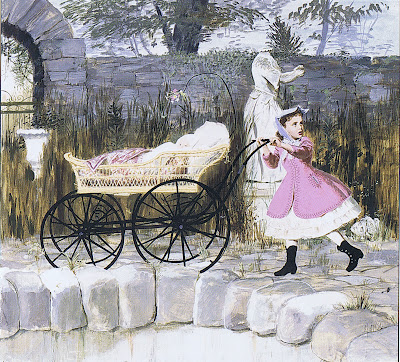 The Parkers moved to Carmel, California in the early 60’s, where he spent the rest of his life continuing to work at his craft. A guiding force behind the establishment of the Monterey Jazz Festival, he also never left his music. 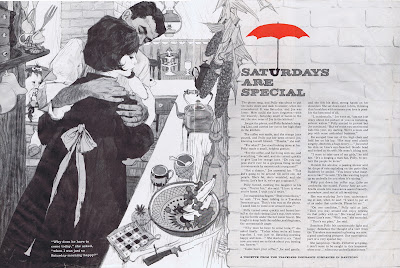 (Thanks to Fred Taraba, Walt Reed, and Dugald Stermer for information from their writing on Al Parker gallery. His magic goes on. 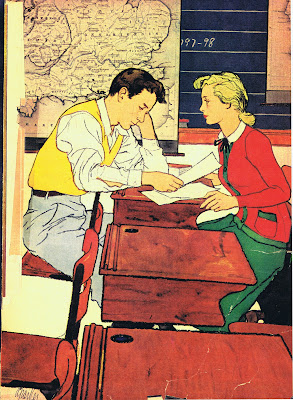 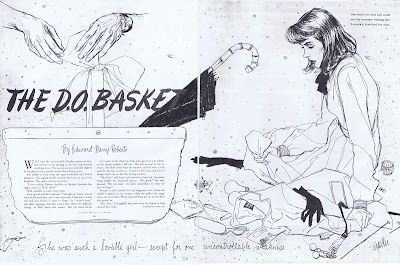 Above is a sampling of some of Al Parker's great illustrations, but don't be afraid to google this incredible illustrator for more images.
Posted by Voz at 4:16 PM