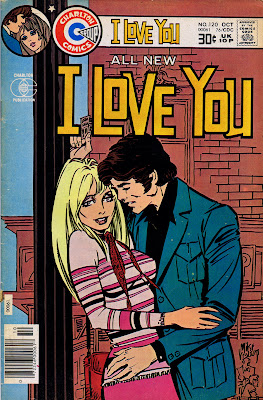 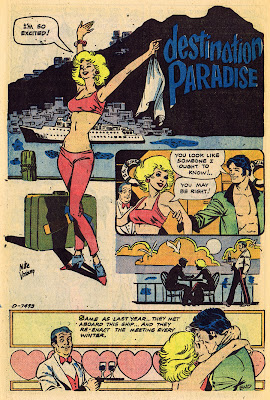 CS: Please tell us something of your life before Charlton. Things like where
and when you were born, early comics you read, artistic aspirations…

I read all kinds of comics as a kid. There weren’t a lot of superhero titles other than Superman,
Batman and Wonderwoman when I was growing up. There were lots of westerns, funny animal books, Classic Illustrated (my favorites) and lots of mystery comics. These especially appealed to me. 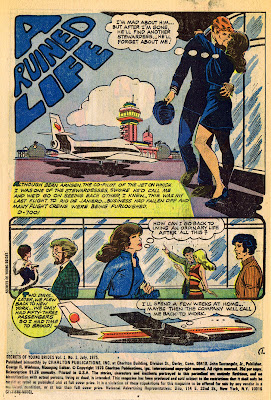 I was never very interested in science fiction, so most of the outer space monster stuff and the majority of the super hero comics that starting appearing in the 60’s had little appeal for me. If I liked the artists, I’d follow the strip, but the stories themselves had little appeal.

After I was about 13 or 14 I don’t think I ever read my comics, certainly none of the Marvel stuff which truly bored me. I was much more interested in reading books. For me comics were essentially a visual medium, so I loved looking at the illustrations and emulating them. 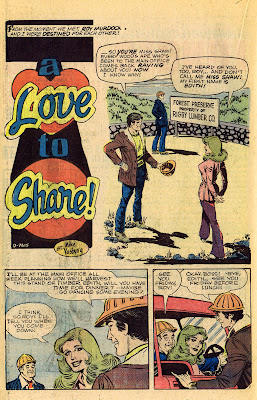 My favorites artists were Joe Kubert, Russ Manning, Al Williamson and Kurt Shaffenberger in comics and Leonard Starr and Hal Foster in the newspapers. Steve Ditko was the Charlton artist who really appealed to me. I loved his otherworldliness.

CS: Can you remember your first Charlton comic? Any particular titles,
characters or series that stand out in your memory?

My first Charlton story was “The Arena of Lost Souls.” I was working for DC or Marvel at the time and there kept me fairly busy pencilling, but they never let me ink the work. 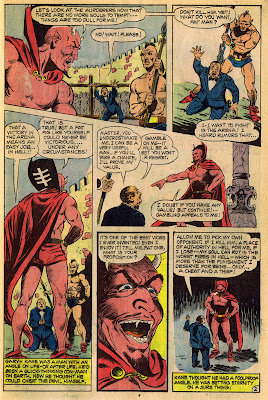 Al Milgrom, (who very kindly always let me stay at his place when I was in NYC) and I took the train up to Connecticut to meet with Nick Cuti, who was the editor then. I’ve worked with Nick since on a few animation jobs here in LA...always a great guy. We also met George Wildman who looked over our work. I think we both got a couple scripts to work on. The attraction for me was that I could ink the work myself.

Looking back on my beginnings in comics I always had good people inking my work, but the end result was always so foreign from what I was attempting that I can never look at it enthusiastically. When I look at the work I inked myself I see a completely different artist. When I failed, I failed utterly because there was no seasoned inker to correct my mistakes. But I found that when I inked my work I took the pencils to another level. I pretty much knew what I wanted in terms of style, but lacked the drawing skills and technical tricks to get there. Because I wasn’t finishing the majority of my work, I wasn’t aware of the problems I was causing for the inker...once I had to do the work myself I had a much better understanding of how to resolve the problems. 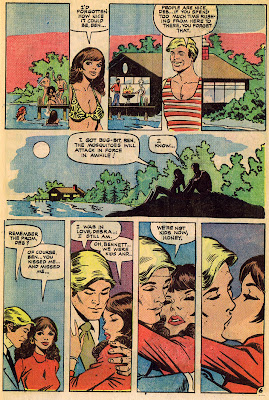 As a result, the Charlton stories I did and the Star*Reach stories were my favorite stuff from that period of my career.

CS: At the time of your work for Charlton, George Wildman was the editor.
Can you describe your contact with him and any other persons associated with
the Charlton outfit?

I did a total of four horror stories, two romance stories and two covers and three separate one page fillers. I also did the one war story. I was (and still am) very anti-war and not very enthused about doing the war story. I think Nick asked me to do it as a favor. I wound up doing the entire job with swipes from Joe Kubert’s Sgt. Rock stuff, so at least it had some appeal. 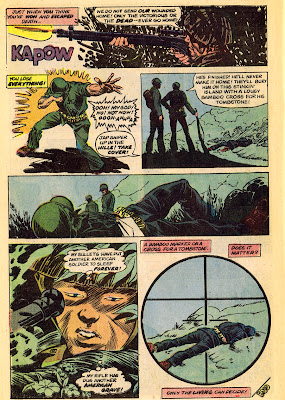 Ironically, the most financially successful comicbook I’ve been connected with is G.I. Joe. When people joke with me about drawing pornography because of my Lori Lovecraft stories, which are truly innocent and inoffensive, I always like to point out that the only REAL pornography I’ve worked on is GI Joe.

The horror stories were always great. The first was  “The Arena of Lost Souls” about a doomed businessman (the character was actually a swipe from Mary Perkin’s agent from the Leonard Starr strip) who tries to cheat the devil in a fight to the death. He picks out the puniest guy in the place. As they fight a full moon rises...of course the guy is a werewolf. Where the art works, it really works. Where it doesn’t, it’s really amateurish. 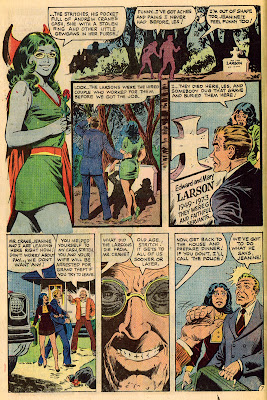 In “A Nice Place to Die” an old couple saps the life from a worthless young couple. (Ghostly Haunts #39.) My favorite was in Ghost Manor #23, “It’s a Gas”, written by Nick, about a young girl and a con man named Calabah Quint. I think Nick wanted to do more stories with the character, but nothing ever happened. 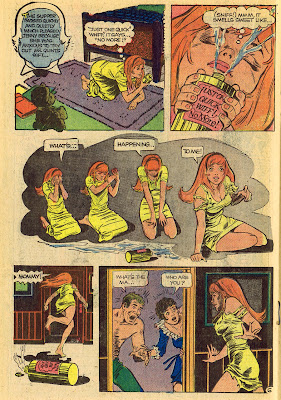 The last horror job was certainly my best effort. I remember the late Grass Green gave a me a hand lettering the job and ghosting some of the pencils...and the story was appropriately titled  “The Grass is Always Greener.” (Creepy Things #3) 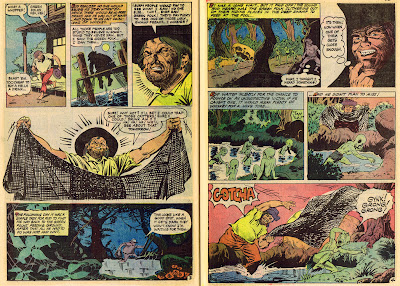 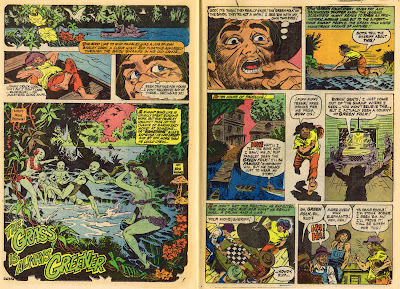 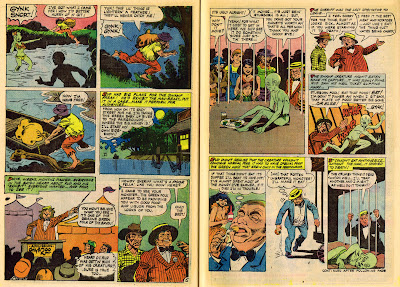 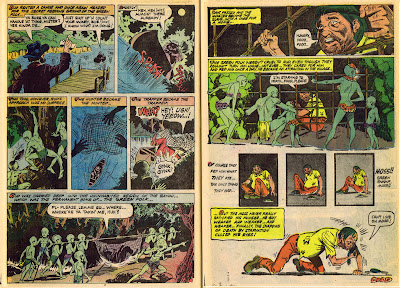 When I was doing the romance stuff I was very much influenced by Frazetta’s “Untamed Love” stories and a Spanish cartoonist named Carlos Jimenez (Dani Futoro and Delta 99), a more unlikely combination you couldn’t imagine. The Frazetta stuff was so rendered and realistic and Jiminez's work was always so cartoony and stylized. 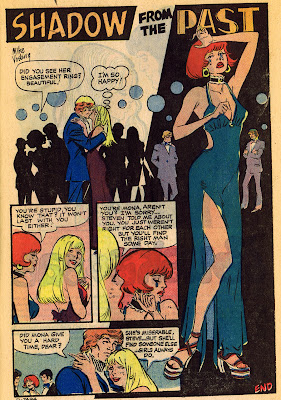 I really enjoyed drawing pretty girls, so the romance stuff was always fun to do. My first samples for comics were actually romance pages I showed up at DC to Vinnie Colletta....but that’s another story. The one painted cover I did was perhaps the only painted cover I ever did for comics. I remember
using markers and it looked like it. Not a bad design but the color and execution left a lot to be desired. (Secrets of young Brides #5.) The cover to “I Love You” #120 was inspired by Bob Peak...still one of my favorite early efforts. I think I was probably getting a lot of input from Howard Chaykin and Walt Simonson at the time. 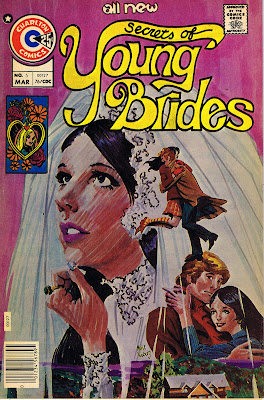 MV:
My other Charlton memories are designing a character (a woman with a short shag haircut, abbreviated leather outfit and whip) for a strip Nick was planning. It eventually went to another artist and Nick apologized profusely. My attitude was if there was a better artist for the job, they should go with him. This is not a business to be in if your feeling are easily hurt.

I also remember doing a short story for Bob Leyton’s Charlton fanzine in early seventies. I forget the character’s name, but I do recall it had a lot of Jiminez and Ditko influence. And Bob has always treated me wonderfully- so it was a pleasure working with him. I remember at the time his ex-wife commenting that if Bob spent a couple weeks practicing, he could probably get a job in comics. I was probably a little skeptical of that time frame, but I recall the next time I saw Bob he was a working professional. 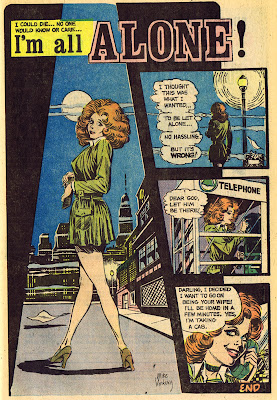