Last week was the closing of a truly incredible art show featuring two giants in the field of movie posters: Bob Peak and Drew Struzan. It was third time around at the show and this time I happened to run into Mr. Struzan himself. In a conversion with him a few years ago he turned me onto a current art auction where I was able to pick up one of my best Robert Fawcett illustrations. When I mentioned that I was able to afford Fawcett’s only because the artist worked in fugitive mediums which has kept the monetary value of his work at a modest level. He immediately pulled me over to the classic Star Wars painting and pointed out that Fawcett wasn’t the only illustrator who had problems with fading. “I talked to George (Lucas) this week and he gave me the go ahead to restore this as soon as the show closes.”,  Drew explained. His artwork has been an inspiration to me for many years, both the drawing facility and the brilliance of his style and design approach. When I started to branch out from comics and animation years ago I was interested in the whole concept of creating movie poster art. All of the Reel Art paintings that I've turned out over the years were definitely motivated a good deal by my love of old movies, and Drew's approach to portraiture. Below is a piece that was originally printed in the CAPS (California Artist Professional Society) Newsletter that I wrote a few years back.


“I paint in pictures what I hope people will see- the best in others.” 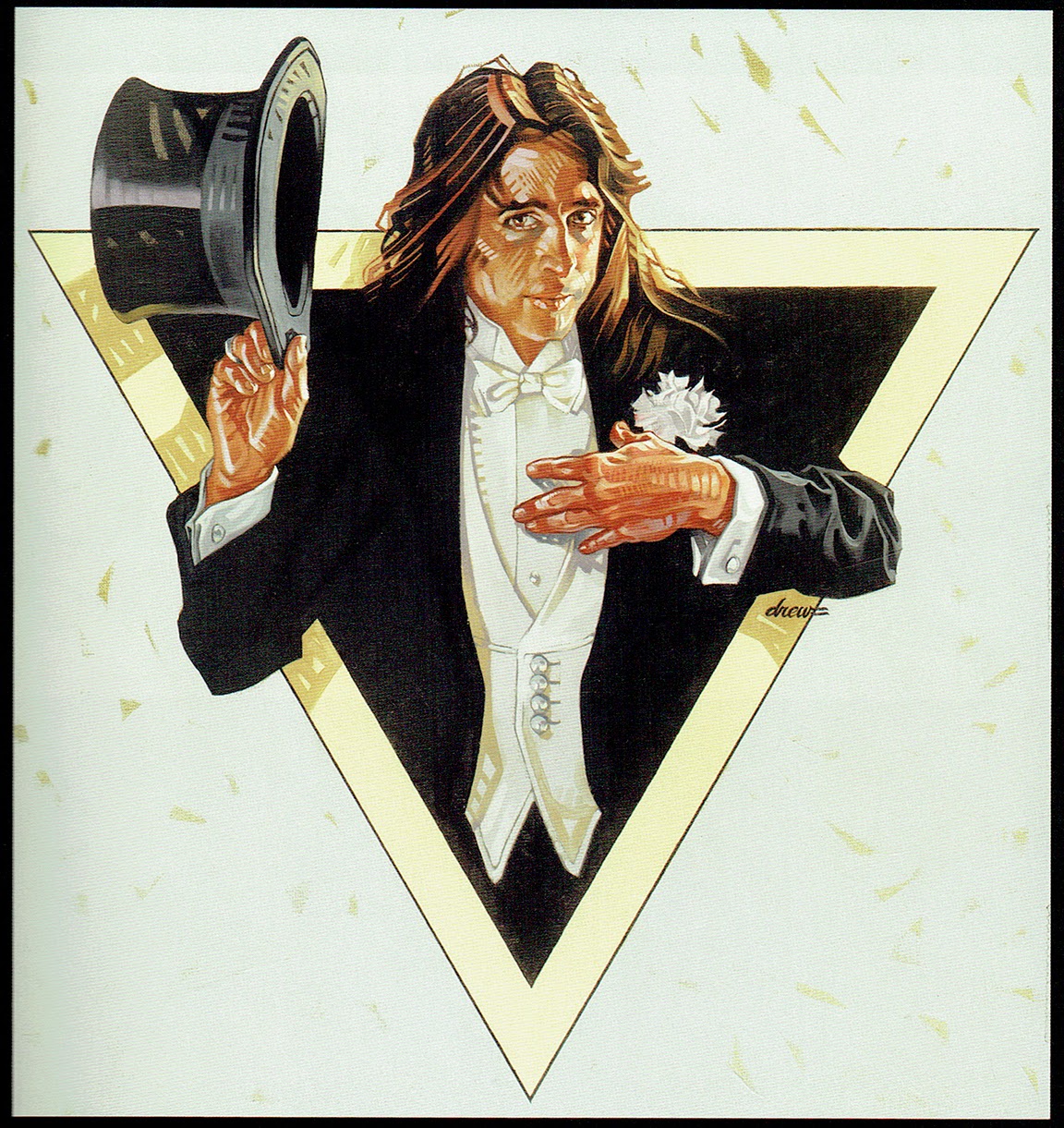 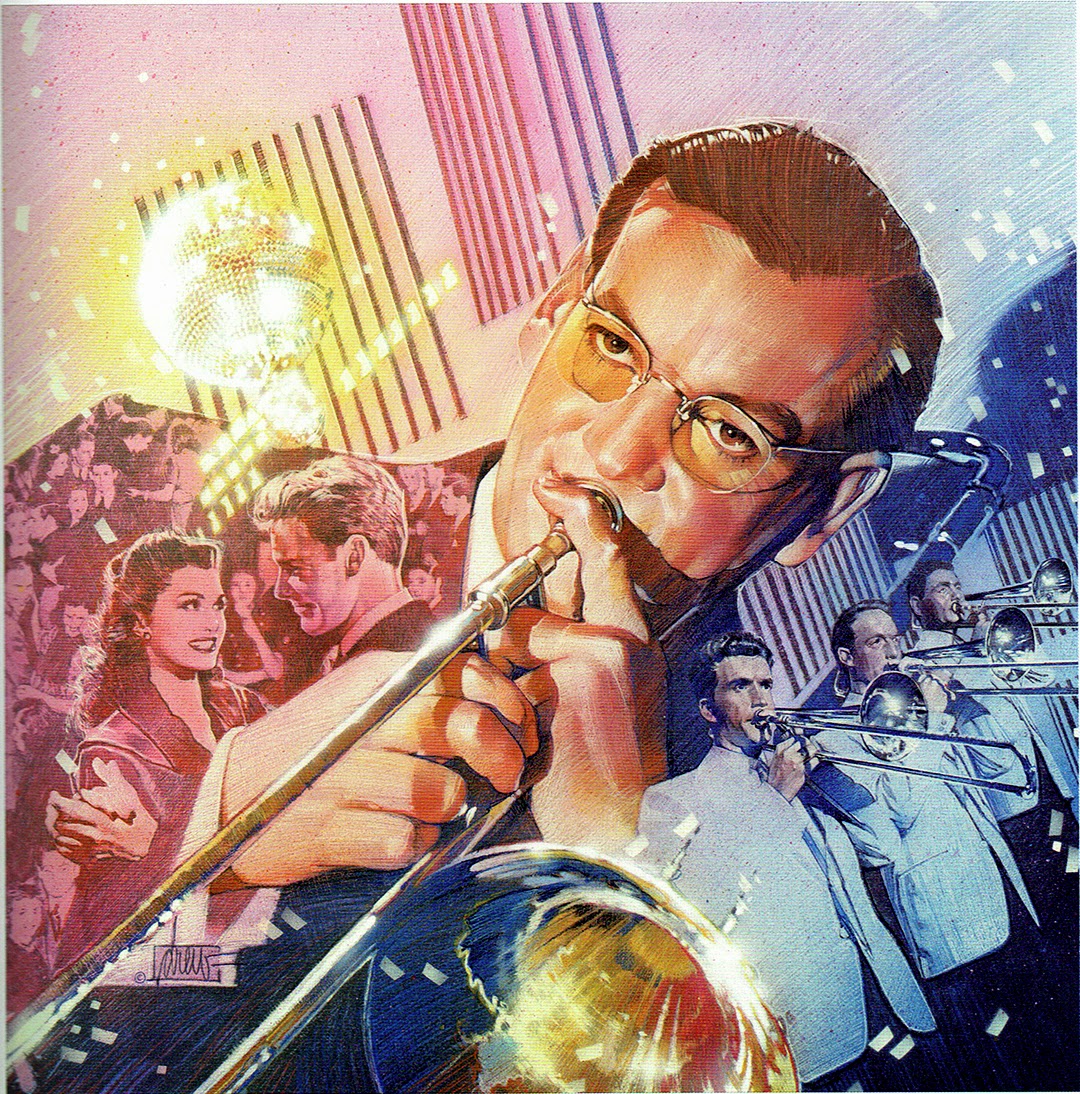 The epitome of this style in movie poster  art is Drew Struzan.

Born in Oregon City in the mid-forties, Drew’s family moved to California when he was quite young. Visually oriented as a child, his mother claimed the aptly named Drew was using pictures to communicate before he could even speak. He understood what he wanted to do with his life very early. After six years at the Art Center College of Design in LA, where his dedication was such that he often went without food to buy paint, he started his career as an illustrator.

It wasn’t an instant success. While there were freelance jobs, after two year Struzan took on a staff job creating record covers to have enough to support himself and his wife and son. From this he graduated to creating his own business with a partner doing B-movie posters for the next several years. A big break came when Charles White III, who was working on a Star Wars poster at the time, approached Drew to have him help  with the figures. It was White who introduced Struzan to the airbrush and from this collaboration his career skyrocketed. In the 80’s, Drew Struzan was arguably the best working illustrator of the time, and certainly the most visible. His posters for E.T., Indiana Jones, Hook, Back to the Future, An American Tale, Masters of the Universe and dozens of others were constantly in front of the public. 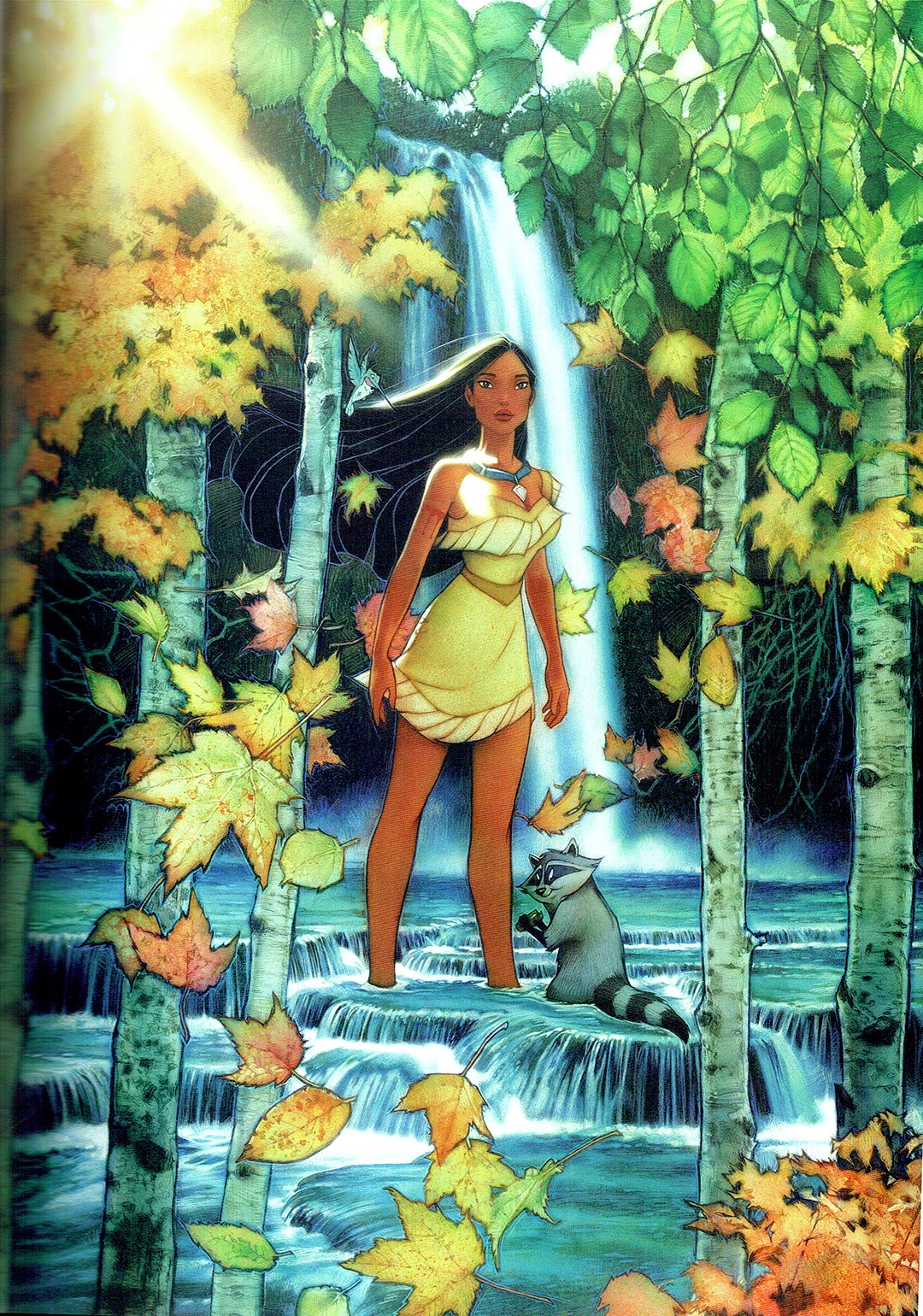 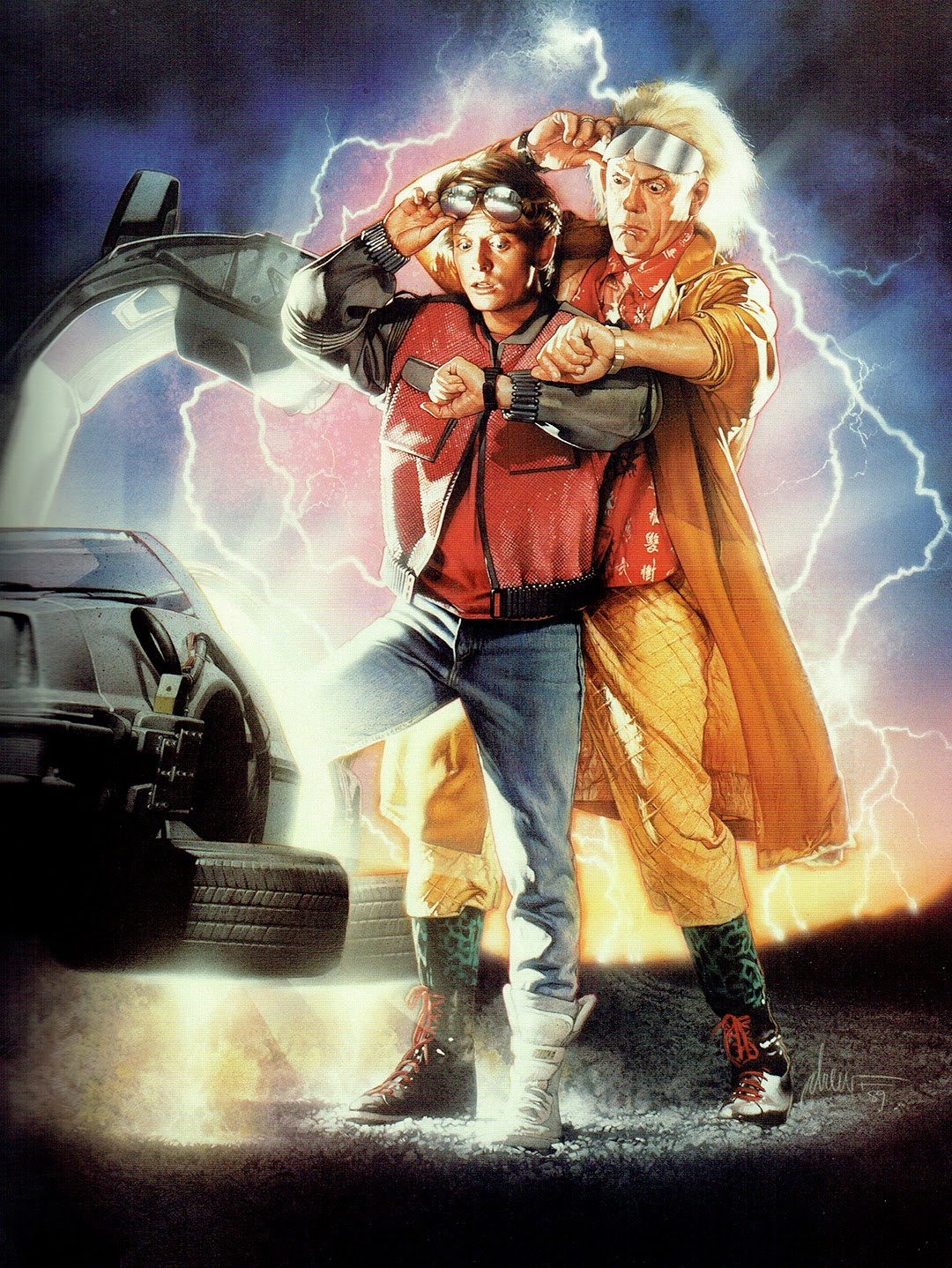 Unfortunately, creativity is bought and sold by the non-creative, who decided that photographs were much simpler to deal with for movie posters. Illustrators like Bob Peak, Dan Goozee, David Grove and Struzan were replaced by young art directors with a smattering of Photoshop.  Fortunately, Lucasfilms remains an exception, and Drew has kept quite busy  doing there movie posters, book covers, and merchandising art.

In his early work, Drew was highly influenced by other illustrators, particularly J.C. Leyendecker and Alphonse Mucha. His own style that evolved was eventually totally his own. It is based on dramatic storytelling, intricate composition and a dedication to drawing and draftsmanship. Drew speaks of the the “joy of doing” as being essential to being a good artist. His love of drawing shines through in every line; like Rembrandt, while the color is used masterfully, it’s added almost as an after effect. 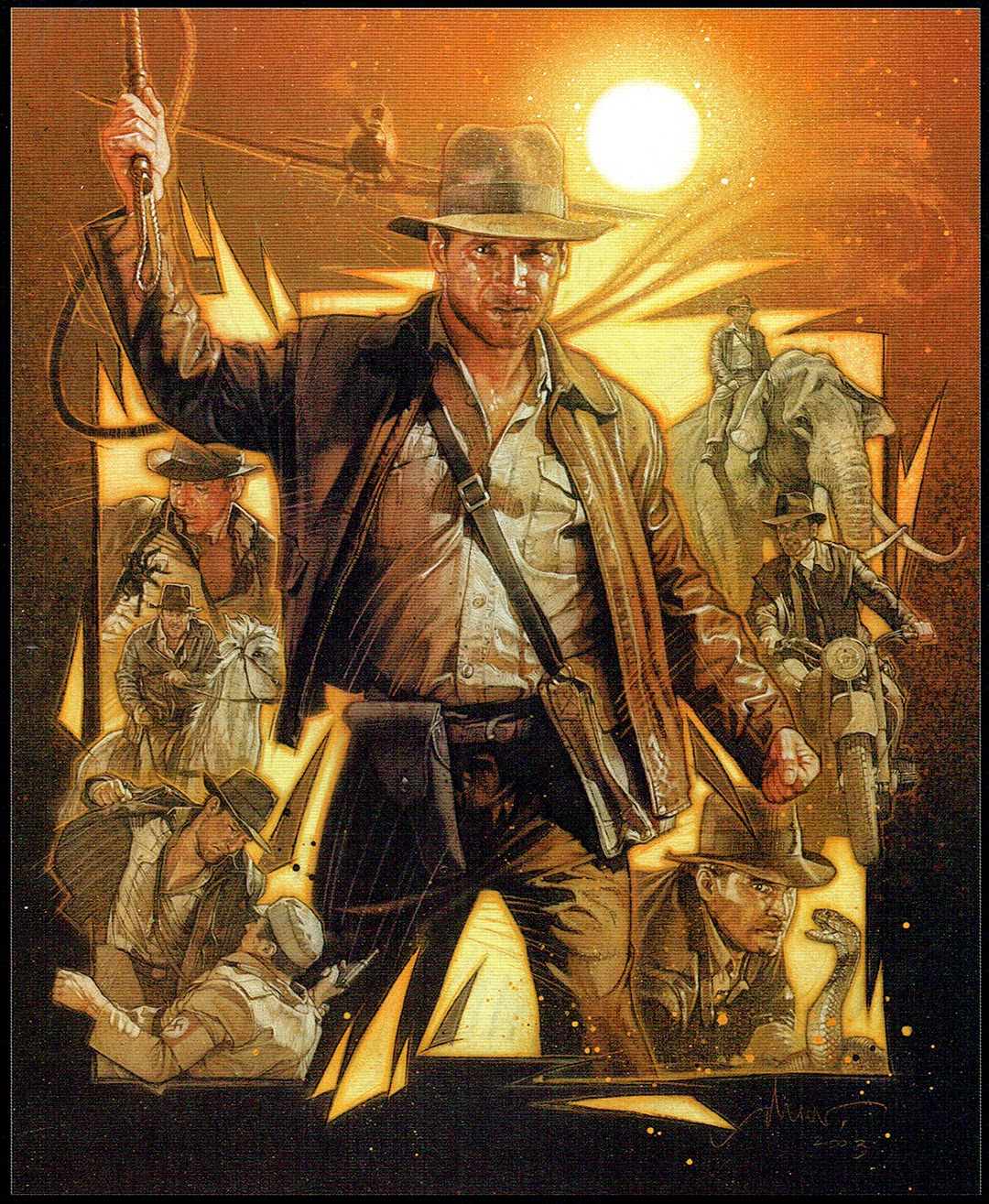 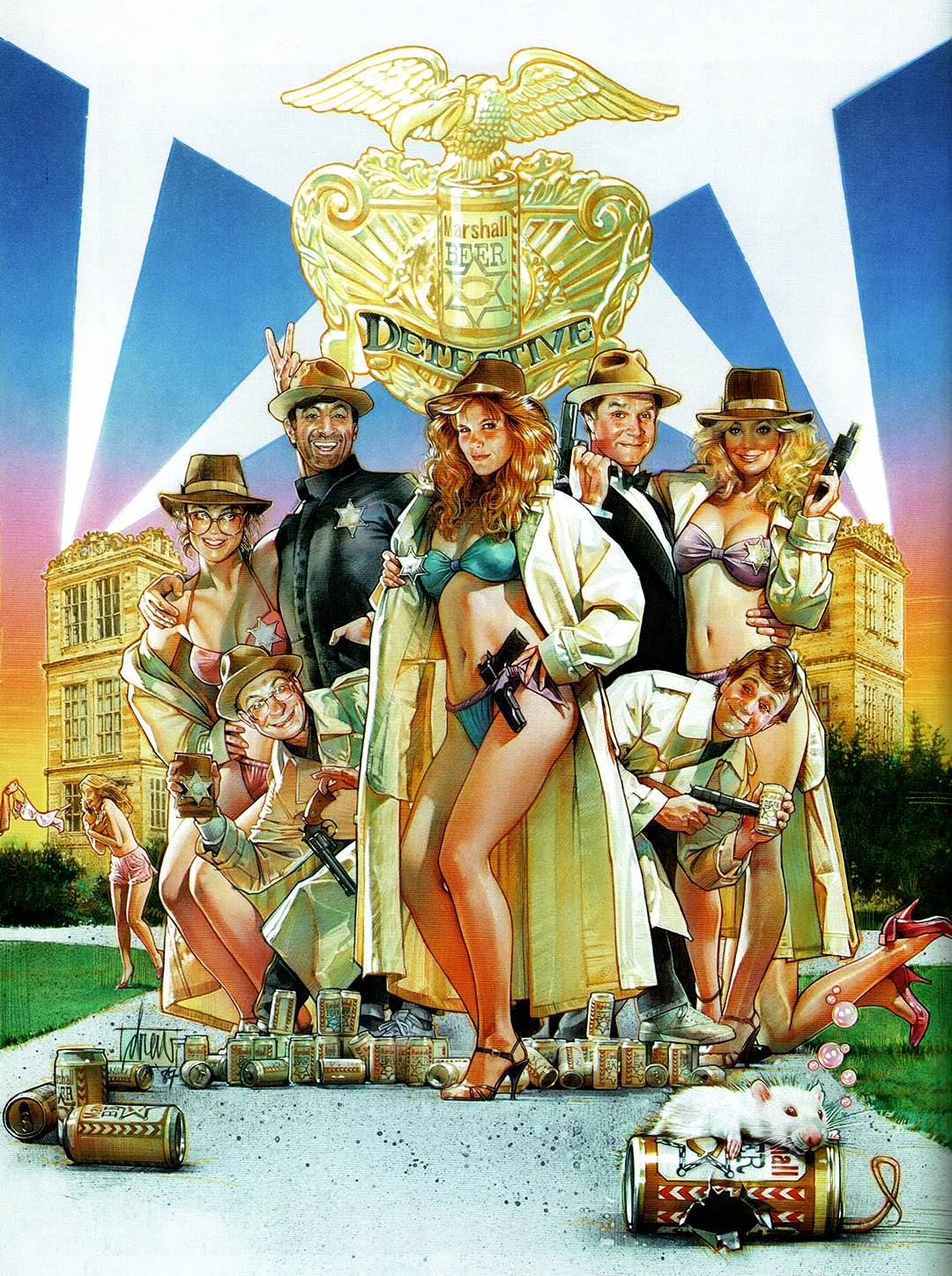 Like all artists, Drew has a variety of working methods. The one I’ll describe is not his only approach, but one he demonstrated in Step by Step Graphics (Vol. 10. #1/1993) While working on an illustration,  Struzan will normally d but one he demonstrated iWhile working on an illustration,  Struzan will normally do several tightly rendered comps until both he and the client are pleased. (Drew says he does the tight comps because most clients, and people, can’t understand the visual shorthand of the artist until it is carefully delineated.) This comp is then placed in a projector and traced off a board covered with gesso. This enables him both to create a textured surface and to erase easily at any time. 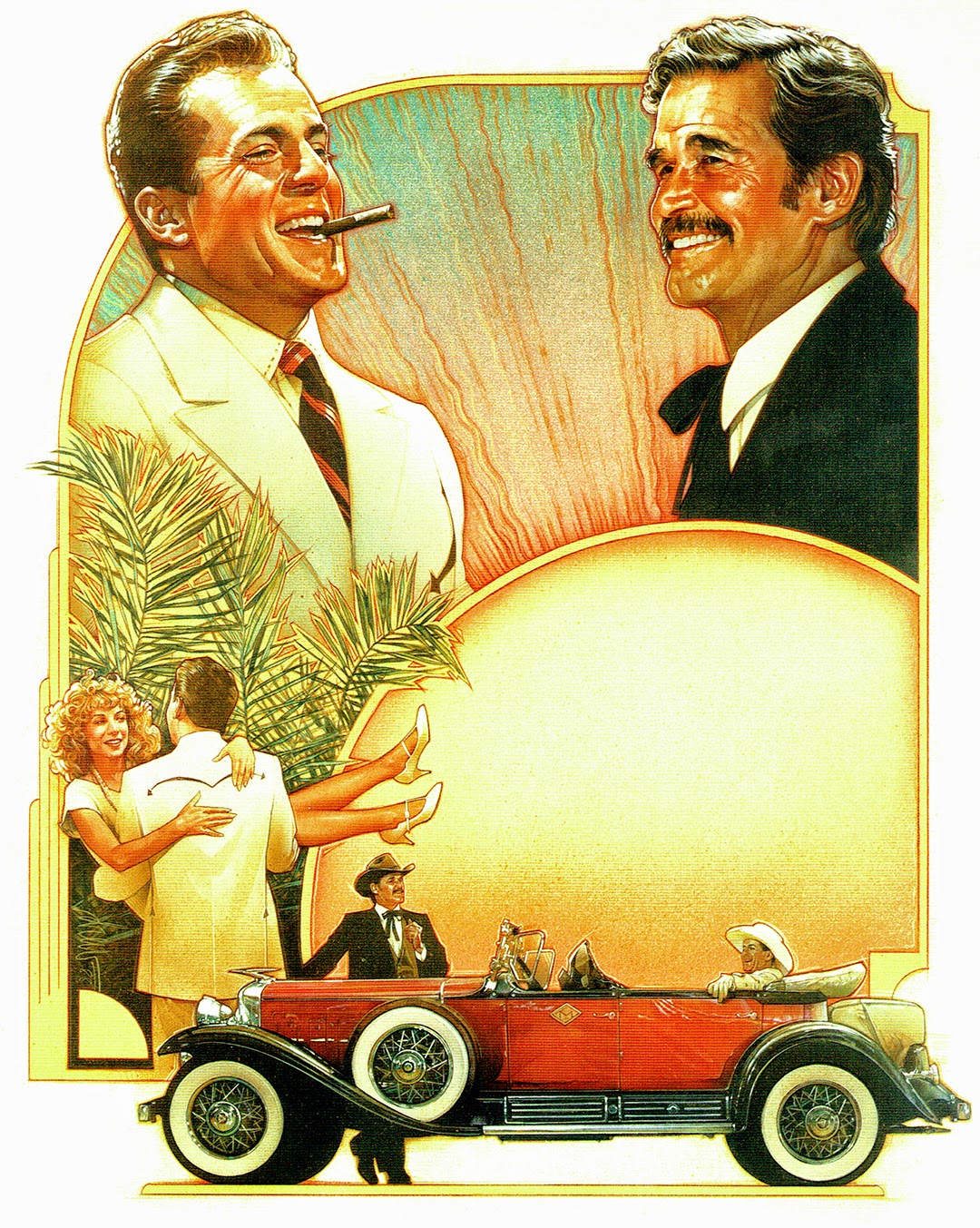 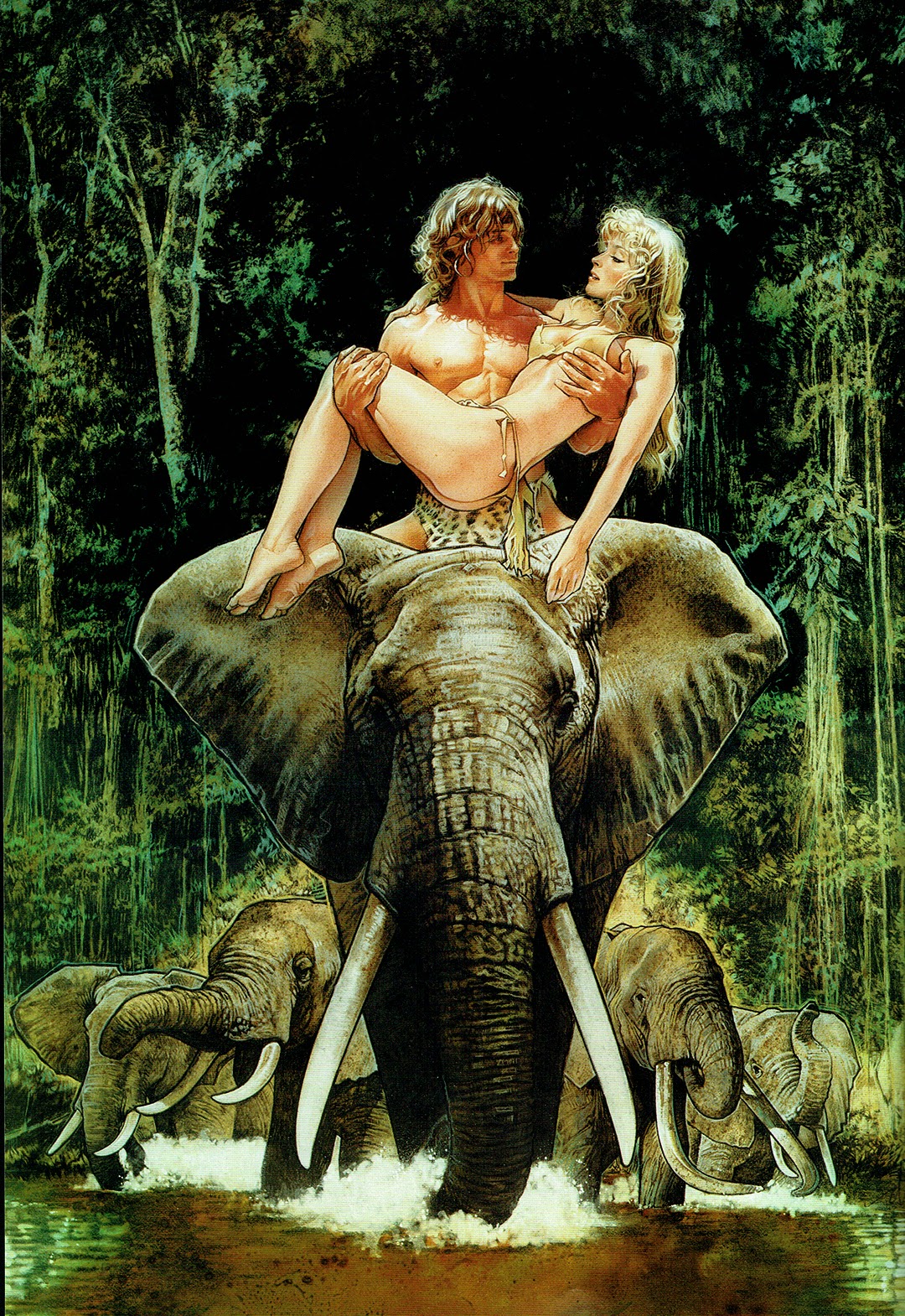 The finished drawing is put together in what is referred to a Dr. Frankenstein method. From a variety of referennce (movie stills, life, photos,etc.) a head is taken from here, a boot from there, a lighting effect from a third source,etc. until Drew’s own version of the piece emerges. I’ve often hear  “artists” complain that illustrators like Rockwell just copy phottographs...and it’s obvious they have never approached the difficult job of “tracing” themselves. Like Rockwell, Struzan adds to and pluses everything from the reference - enlarging hands, changing expressions, reworking lighting- until it forms a compreheensive whole. This finished drawing, done with a variety of graphite pencils,charcoal, and Prismacolor pencils forms a complete tonal understudy for th the final illustration.

The color work goes very quickly as large areas are airbrushed in with a variety of techniques. The final touches are added with opaque paint and Prismacolor pencils. The resulting art is always simply pure magic- love produced on a board. 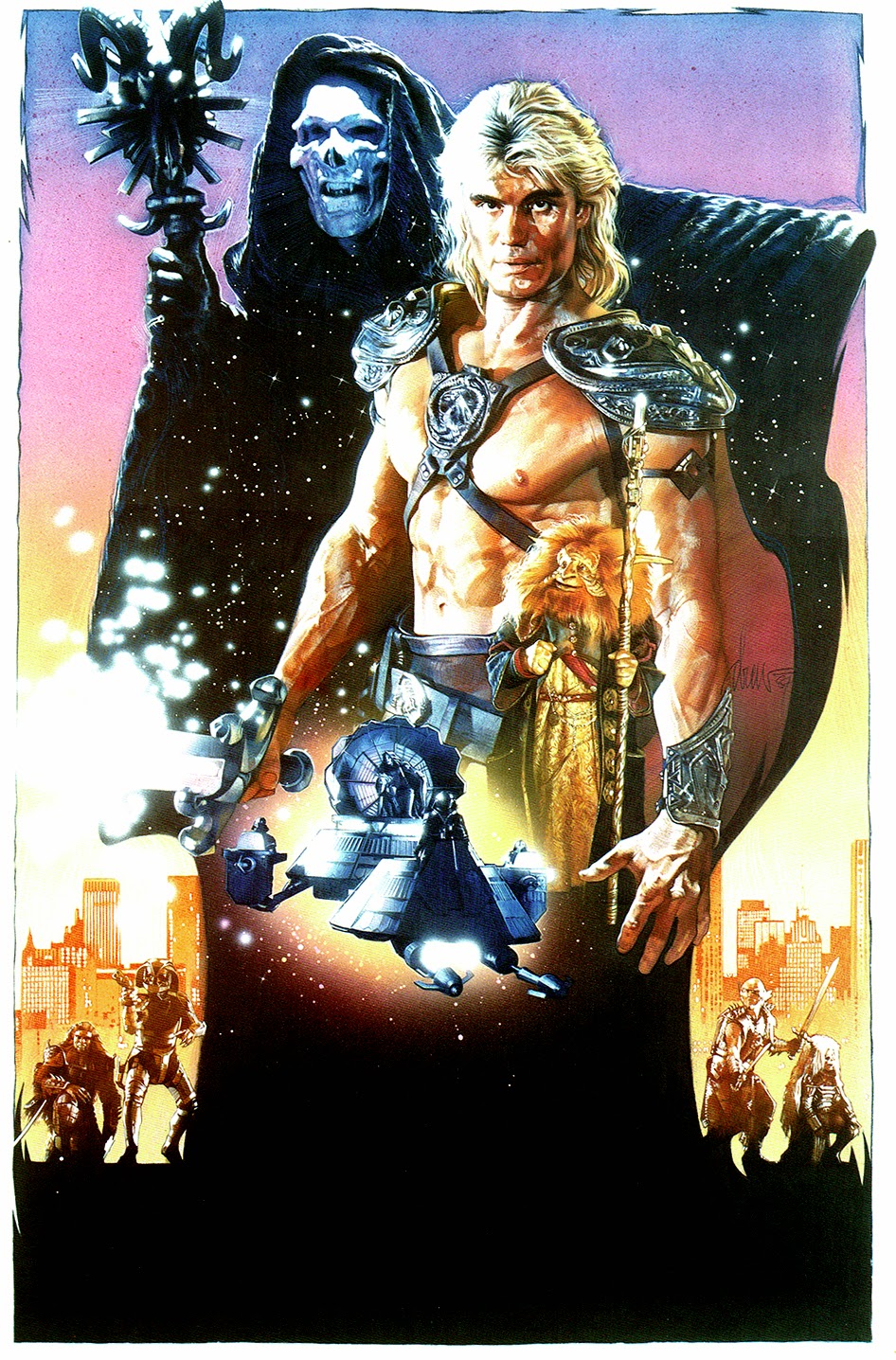 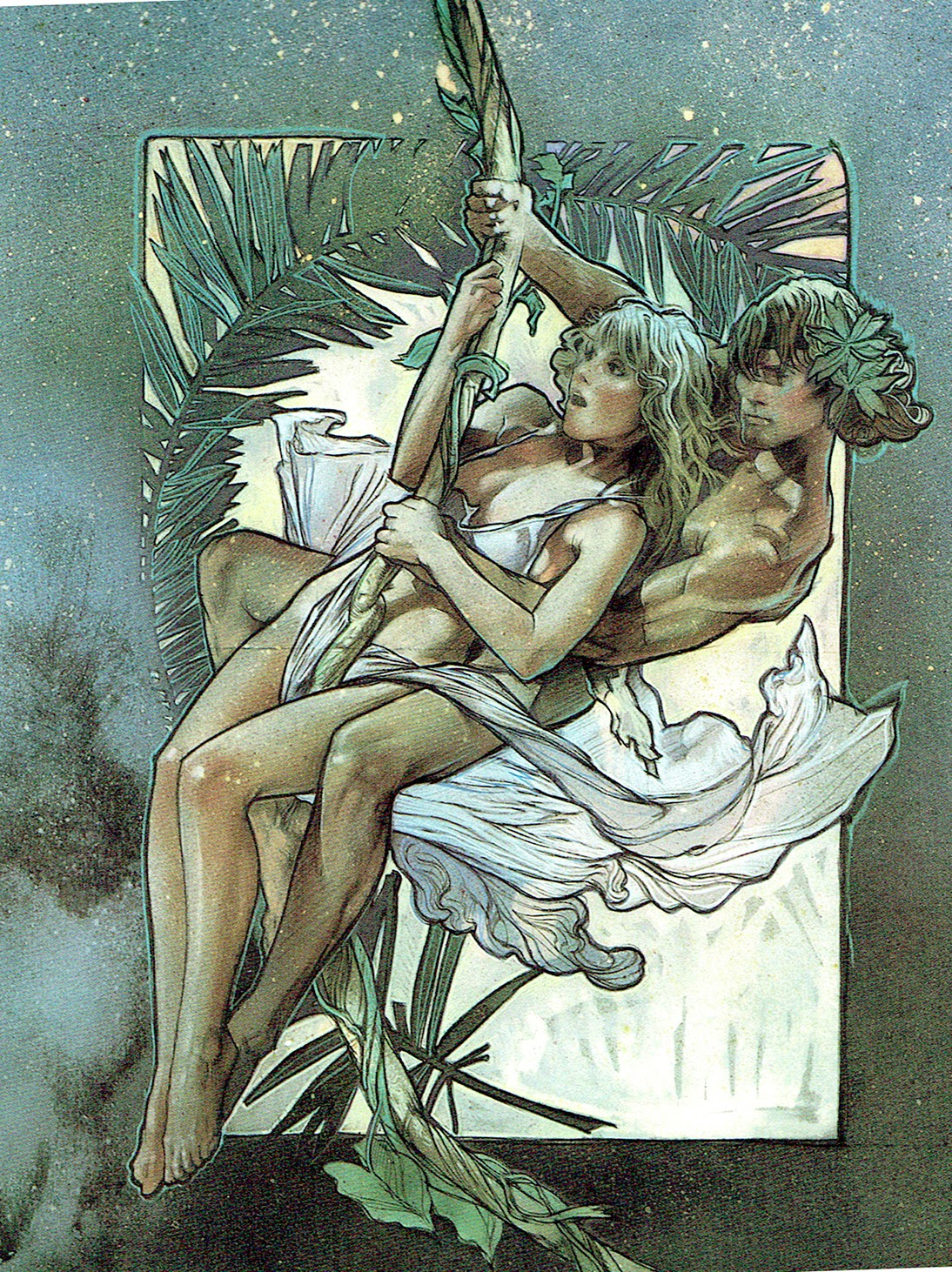 Success can often be the worst thing that happens to people. It makes them afraid to change and try new things.Drew is certainly someone who’s has been through the struggle of non acceptance, enjoyed phenomenal acclaim, and now enjoys a comfortable status as a master illustrator. While the public might speculate how the mighty have fallen, Struzan’s own “success” continues as his work moves forward. Frank Llloyd Wright was considered a has-been at 50, and finished the last three decades of his life with his most remarkable achievements. I have a feeling that when the illustrator is suddenly rediscovered sometime in the next century, Drew Struzan will be at the forefront.

Below are a couple of the Reel Art paintings that I did of some of the Hollywood stars. 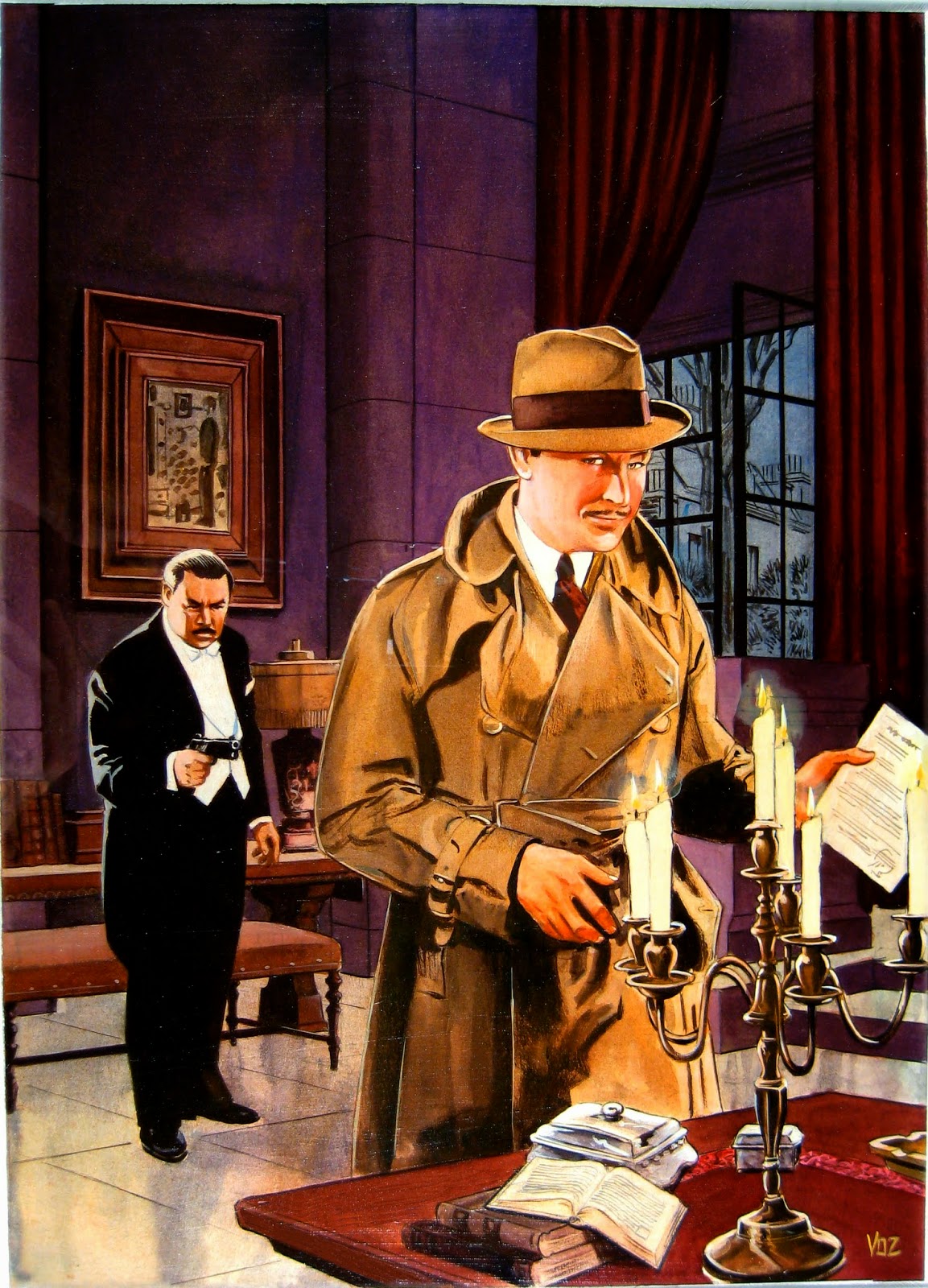 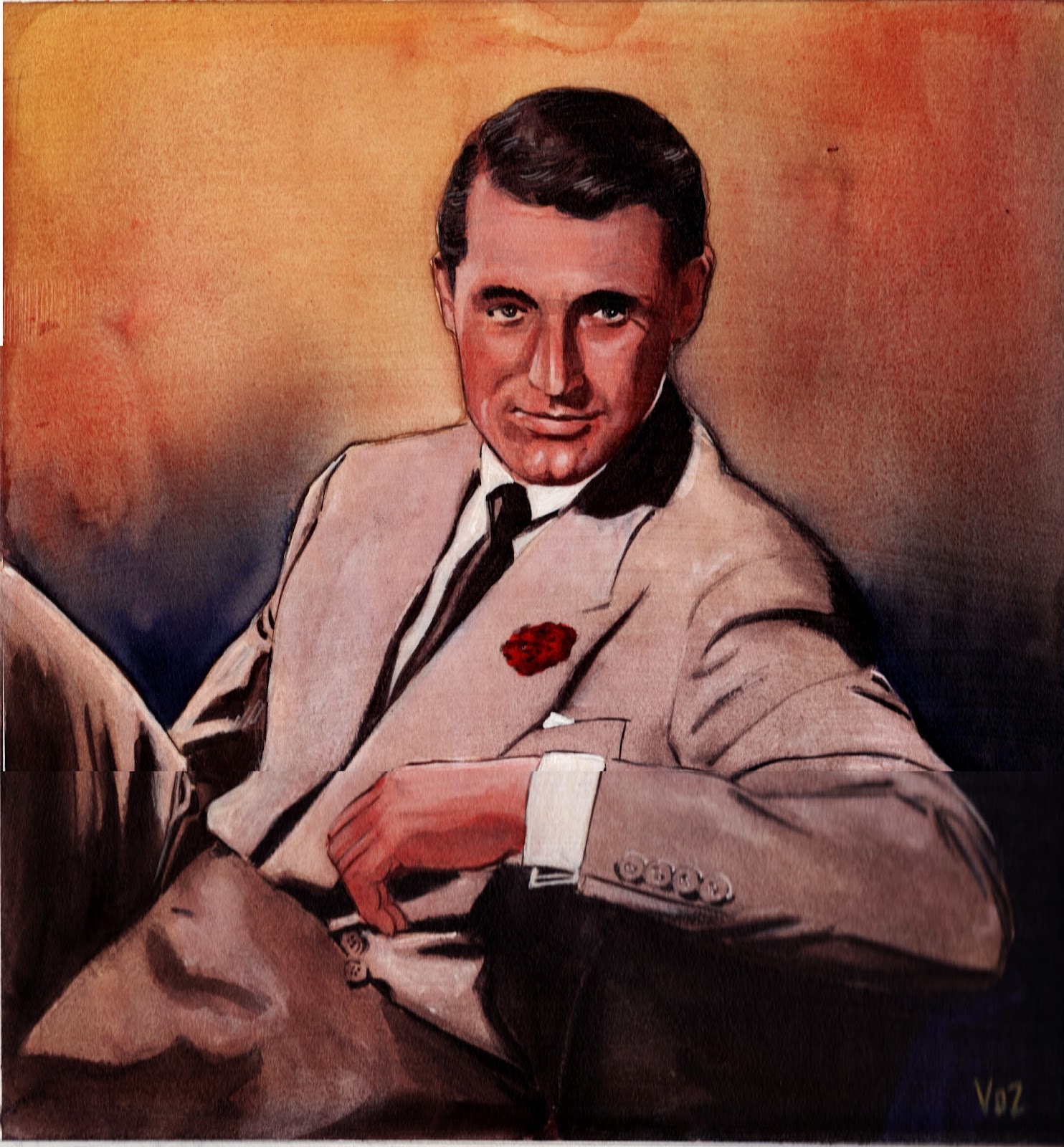 And lastly this post is the cover of Mad Mummy #2 which will be out shortly from iVerse (Comics Plus.) Click on the link below and type in AV Publishing in "Search"
http://digital.comicsplusapp.com/ 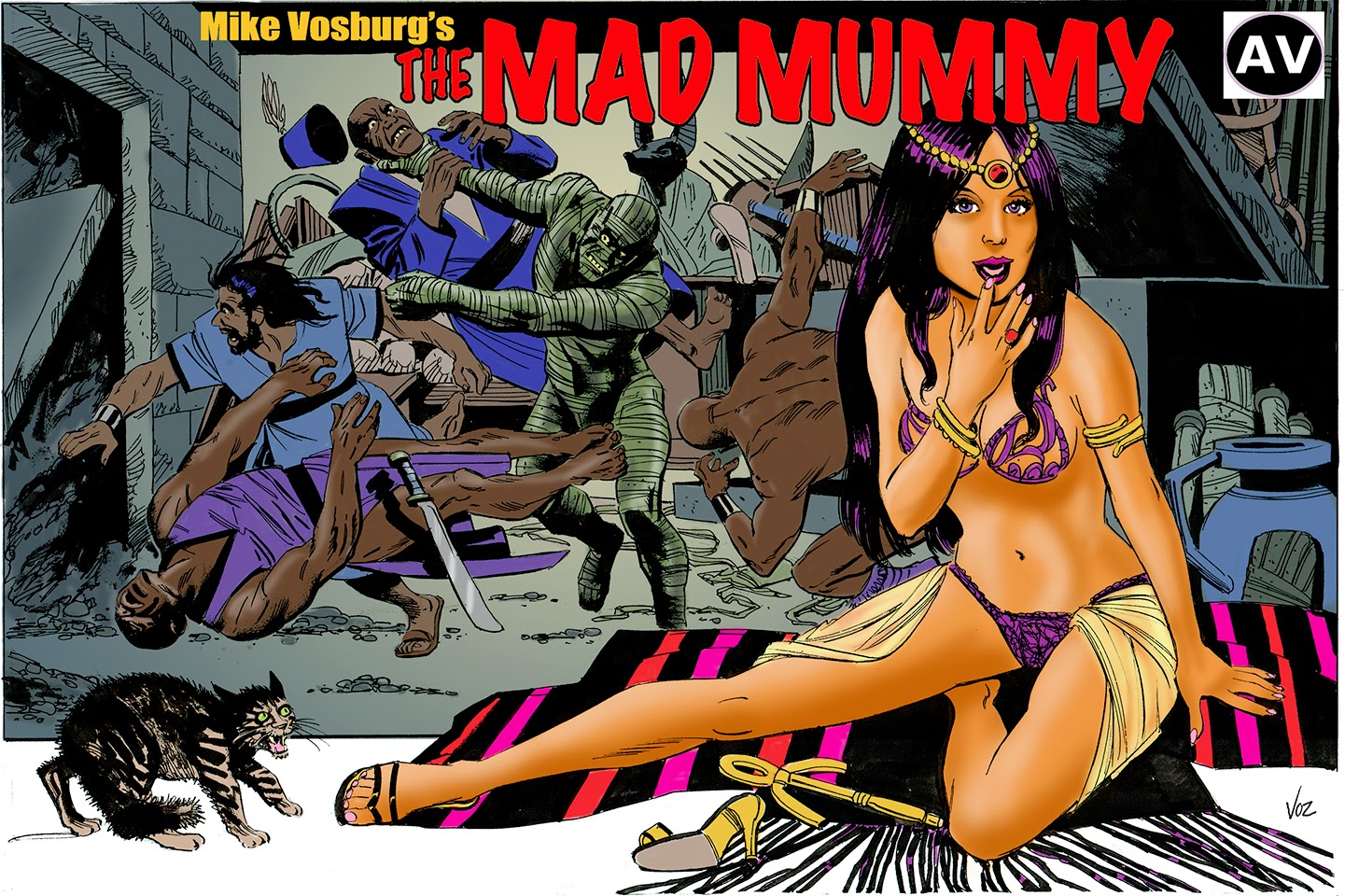