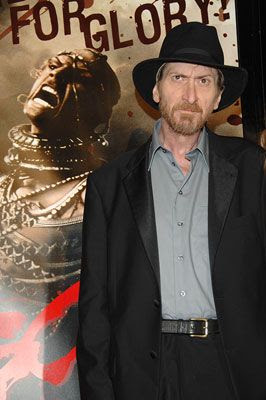 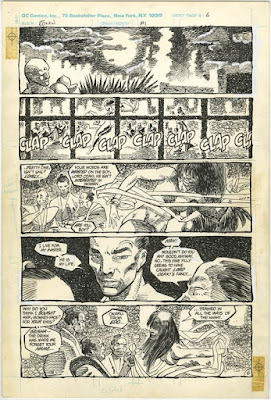 A friend dropped by with a copy of the Frank Miller Artists Edition of Ronin. If you haven’t seen these wonderful books they are collections usually shot from the originals, at the actual size with all the bits of whiteout, paste-ups, and even editorial blue pencils still visible. It’s the next best things to having the originals in front of you.

From the beginning of his career, Frank was always an innovator with his compositions and storytelling, and I was really impressed with how strong his draftsmanship and figure drawing was in Ronin. But what really amazed me was the intricate and dramatic inking job. This was the first time he inked his own work in a series, and it’s not easy to make that leap, especially since he was following Klaus Janson and Terry Austin on the Daredevil series. The work wasn’t just competent, it was exceptional. And he was creating his own unique and personal style to boot. 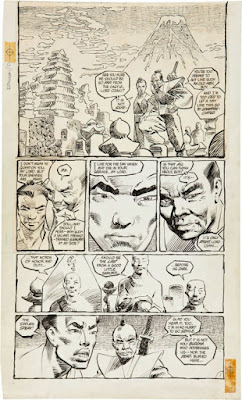 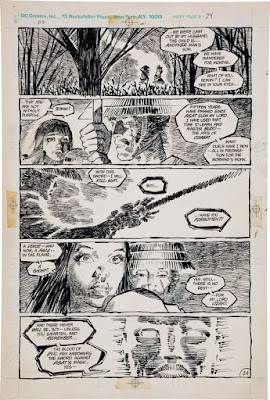 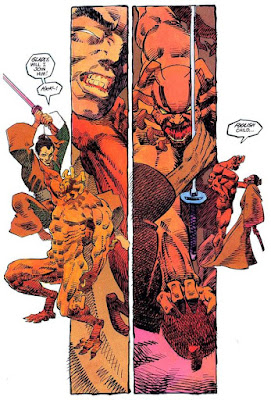 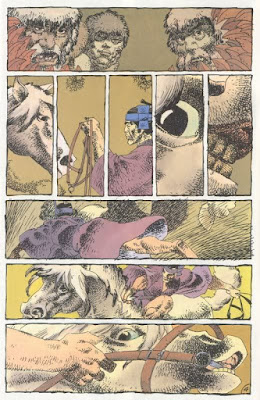 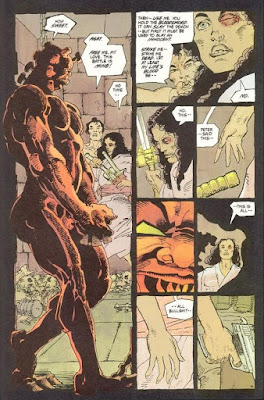 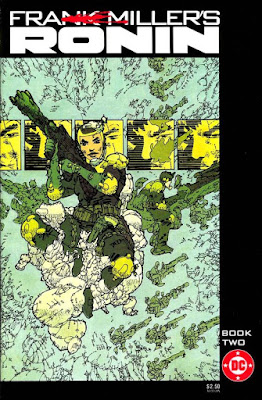 So while I remember reading Ronin when it first came out, why wasn’t I more impressed with it at the time. Grabbing a couple of Daredevil/Elektra compilations I started poring over them. First off, I felt the same kind of excitement and energy that had originally brought me to that series. Secondly, while I had wanted to look at Ronin, I realized I wanted to reread the Daredevils. 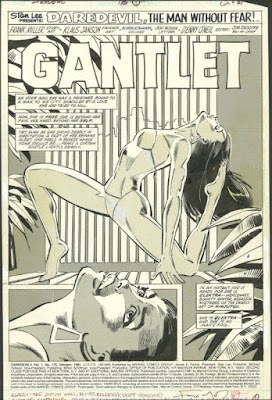 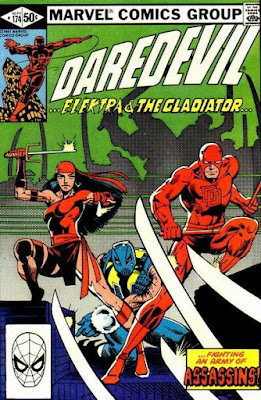 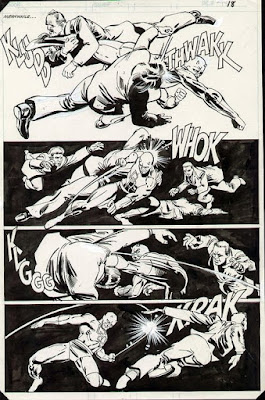 And there was a bit difference in Frank’s work. Having seen some of the pencils of that Marvel series, I was aware of how much Klaus brought to the finishes; but Frank’s inking in Ronin went beyond that. The figure drawing was better, the acting stronger, and the story was tighter his dialogue had a lot less of the Marvel angst. 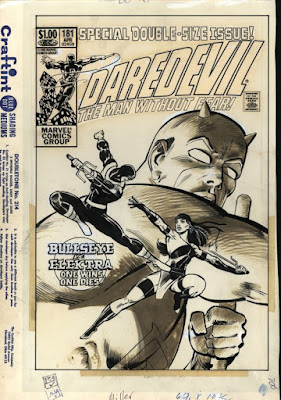 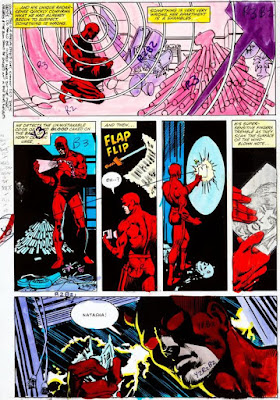 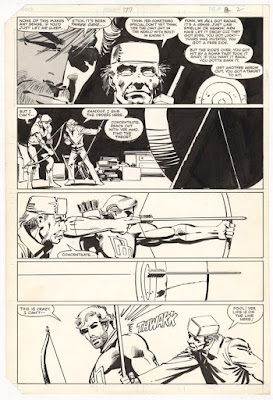 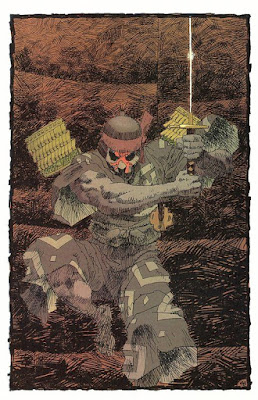 In the final analysis, while I thought Ronin was a stronger creative effort, I still liked Daredevil better. Frank’s work had improved, and my own ascetic tastes had sharpened, but there was an emotional quality in the Daredevil work that clicked with my own emotional status at the age of thirty.

With Ronin I could appreciate it and admire it from an intellectual point of view, but as I had matured, it was far more difficult to retain that enthusiasm of youth. When Miller’s Dark Knight series appeared, with Klaus again inking, I admired and even emulated the work. But I really cared less about Batman fighting Superman (seriously?) and the liberal/conservative metaphor of the series. I found what was going on in the real world of American politics much more interesting. 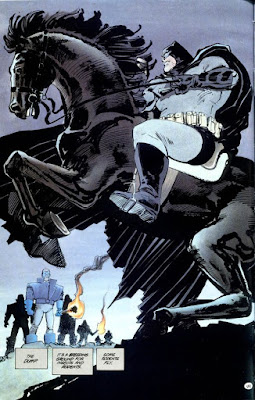 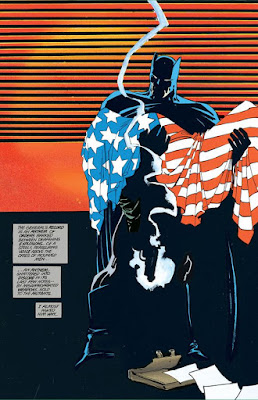 With Sin City the product was aimed at a more adult audience. And the Chandler/Hammett/Spillane reference was much more to my current tastes. The art was so much rougher with Frank again inking his own work,  but this was a  conscious choice that was meant to give you a gut level thrill.  And all of the finesse and the elegance of Ronin had disappeared. The experience was totally emotional . The work came from some inner core that had been untapped before… and I loved it. To the casual observer looking at the artwork of the series, it might appear that the artist has taken a step back from his earlier work. The meticulous draftsmanship and intricate line work has subsided and been replaced by  a visceral quality that takes the story to another level. 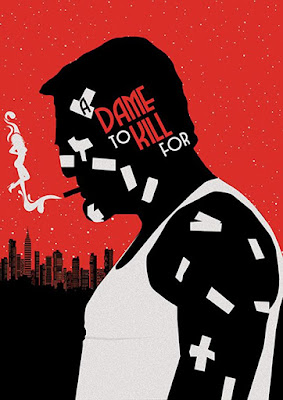 The basic purpose of art is to move the audience. As creatives we gain something as our knowledge of the craft expands, but we often risk the danger of losing that emotional thread in the process. The real trick is being able to satisfy both needs.   You can look at a creative effort and it is easy enough to make decisions about how good or how bad it is using critical criteria: is their strong draftsmanship, interesting and dynamical compositions, a good use of value?….the list can go on and on. It’s much more difficult to explain why you like a certain piece of art. That’s a much more abstract and difficult question. And it goes beyond the attraction of the work itself. It’s deeply related to who you are and where you are at when you see it. 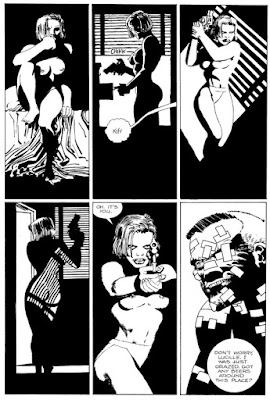 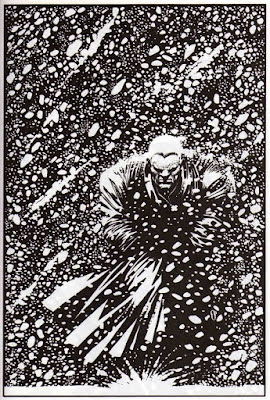 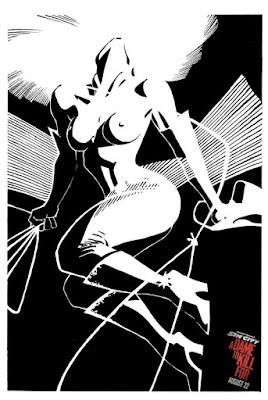 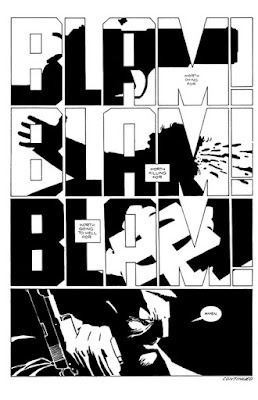 When Richard Lester’s version of The Four Musketeers opened in 1974, I saw it in the exciting city of New York, where I was staying with my friends Al Milgrom and Walt Simonson. I was just starting my comic book career and their generosity and friendship were an essential part of it. We all went to the film together. It opened with a shot of a sword slowly being pulled out of a scabbard to a long drawn out SCCCRRRIIINNNNKKKK sound effect. Simonson let out one of his spontaneous barks of laughter in delight. I knew then and there that I was going to love the movie…and I did. How can I go to a movie these days and expect to have any kind of an experience close to that. 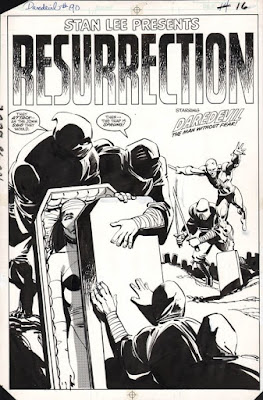 And where am I going to find another comic book series that got to me like Daredevil.