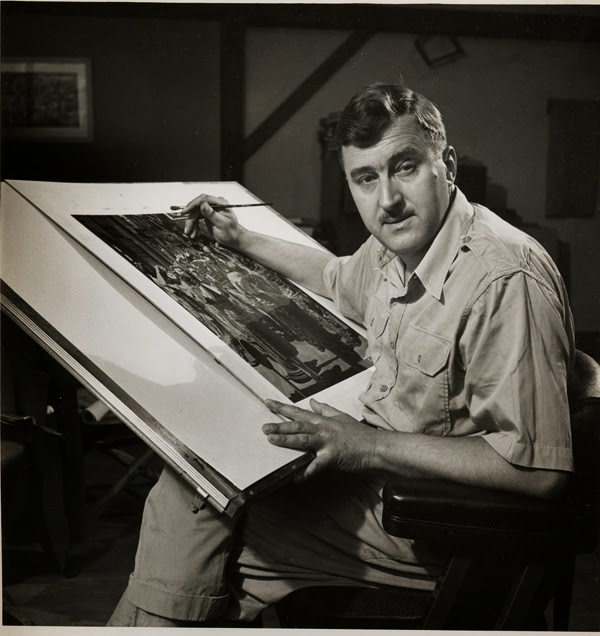 In his long career , Robert Fawcett was best known for the series of illustrations he did for Sherlock Holmes, written by Conan Doyle's nephew Adrian Conan Doyle and John Dickson Carr. There were a dozen stories that appeared. The first ran in Cosmopolitan, and the other eleven were published in Collier's Magazine in l953. Looking at this series you can understand why Fawcett was considered one of the truly great illustrators.


One of the hallmarks of RF's work was his powerful sense of value. While the majority of his illustrations were finished color pieces, like Rembrandt, it was the black and white tonal structure underneath (along with his precise draftsmanship ) that brought the work to life. As the late great cartoonist Rowland B. Wilson once counseled me: if you plan a picture with strong value, you've given yourself a good chance for success.

Fawcett's drawing The Kelkie (below) is a prime example of the importance of value. The following story, related by Fritz Henning in his excellent book, Drawing and Painting in Ink, drives home this point. 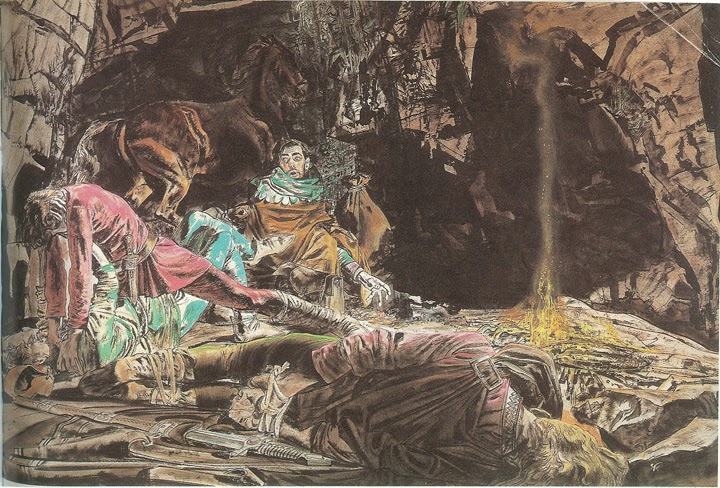 "In his haste to get started, Bob overlooked the art director's written instructions that the illustration was to be reproduced in full color. Only after he had completed the entire rendering in black ink and had it in a mat and ready for delivery did he discover the directive about color." 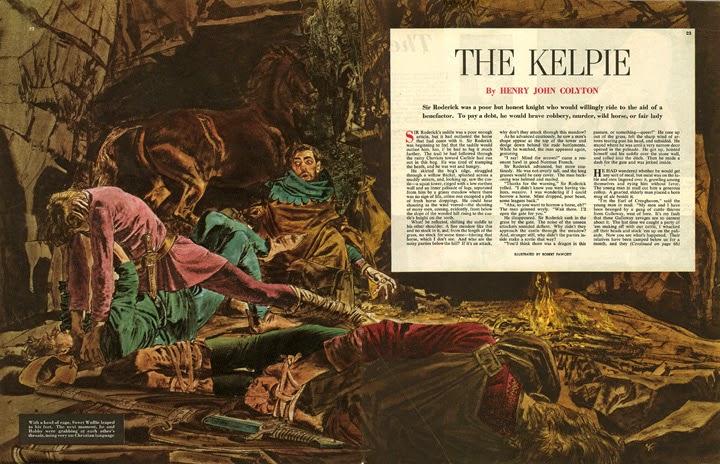 With his wife Agnes suggesting hues (Fawcett himself was color-blind) RF quickly laid down a series of color washes over the illustration- less than an hour's work. After it was published in the Saturday Evening Post, the NY Society of Illustrators awarded it the gold medal for best color illustration of the year.
You can compare the original as it was printed (on the right) with a reproduction from the original taken years later after a good part of the color faded (Fawcett often used colored dyes that were not light fast on his paintings.)

Below is a demonstration from one of the Famous Artists courses that explains Fawcett's approach to design and storytelling. 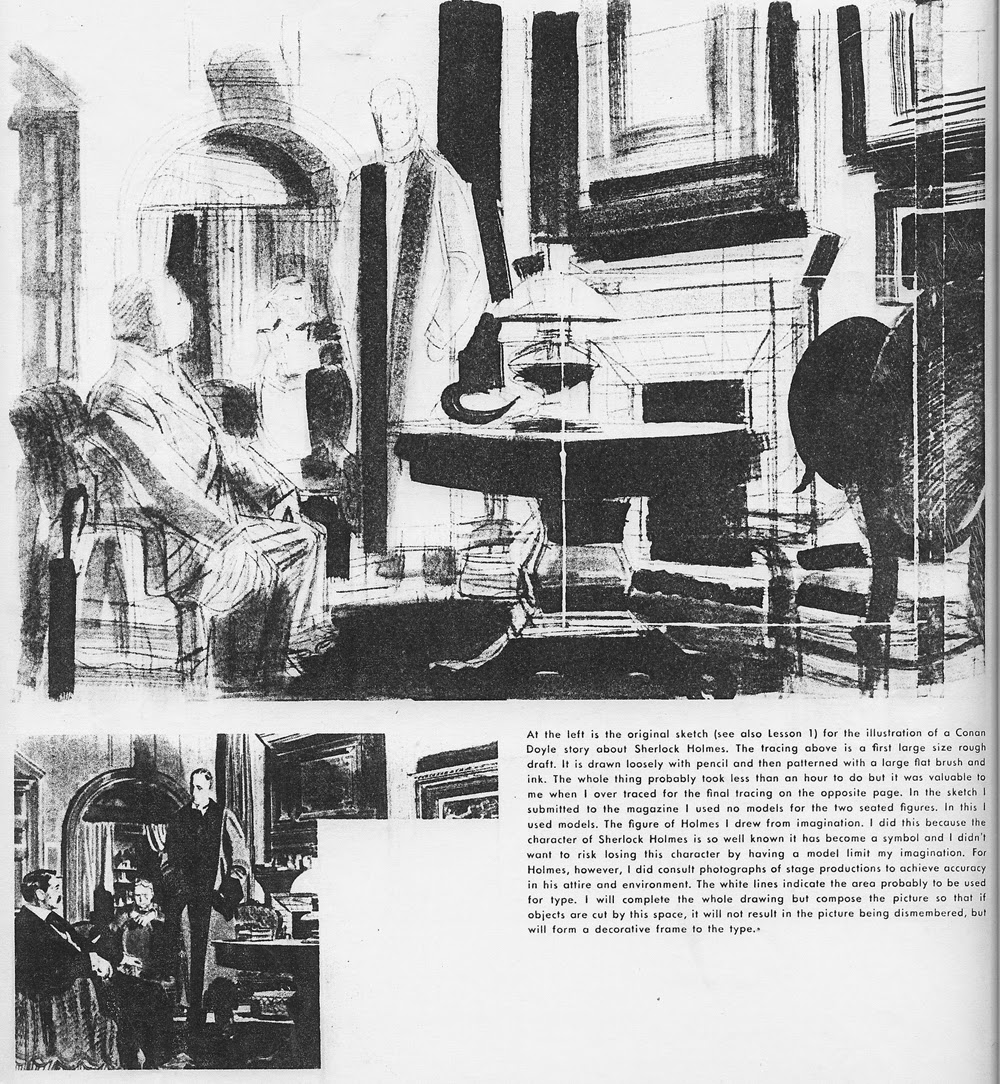 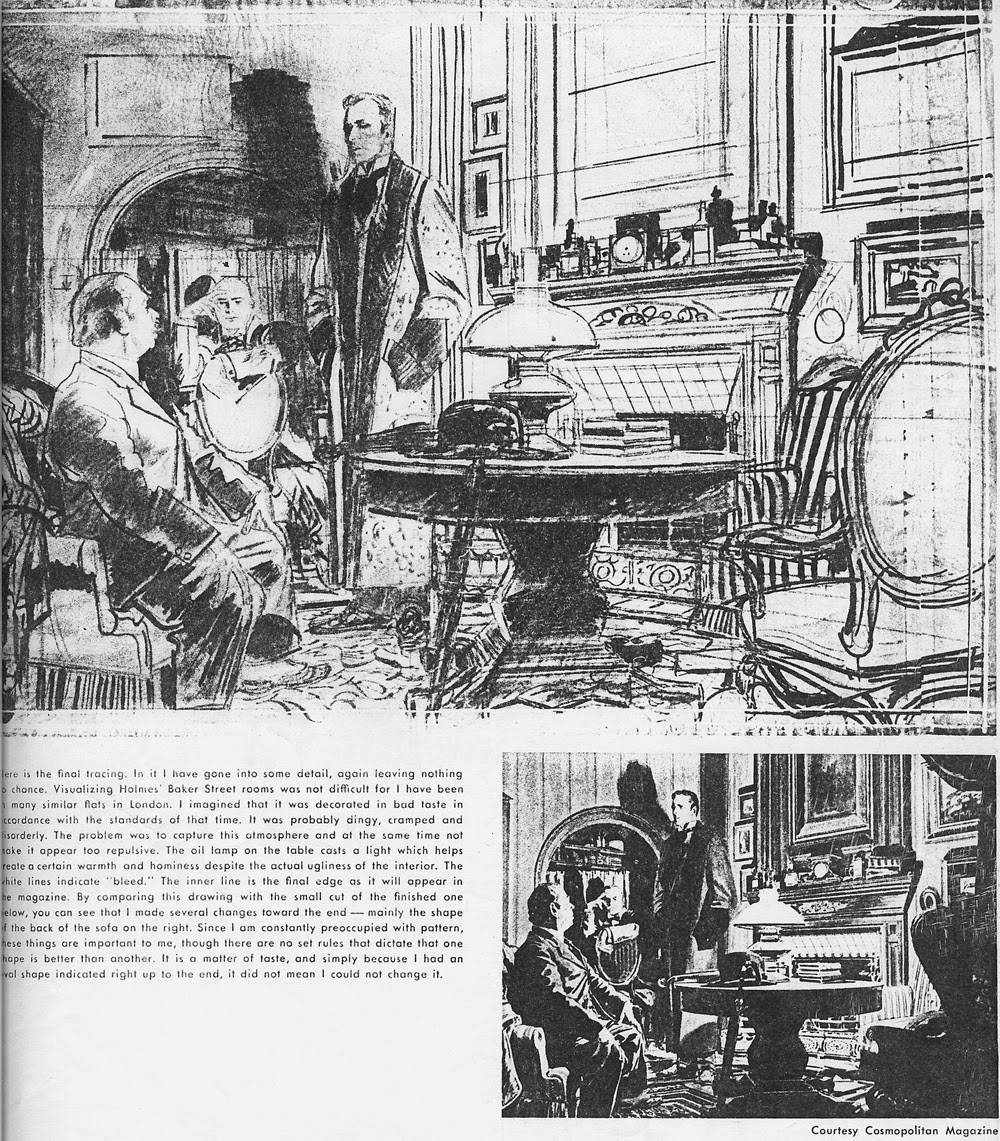 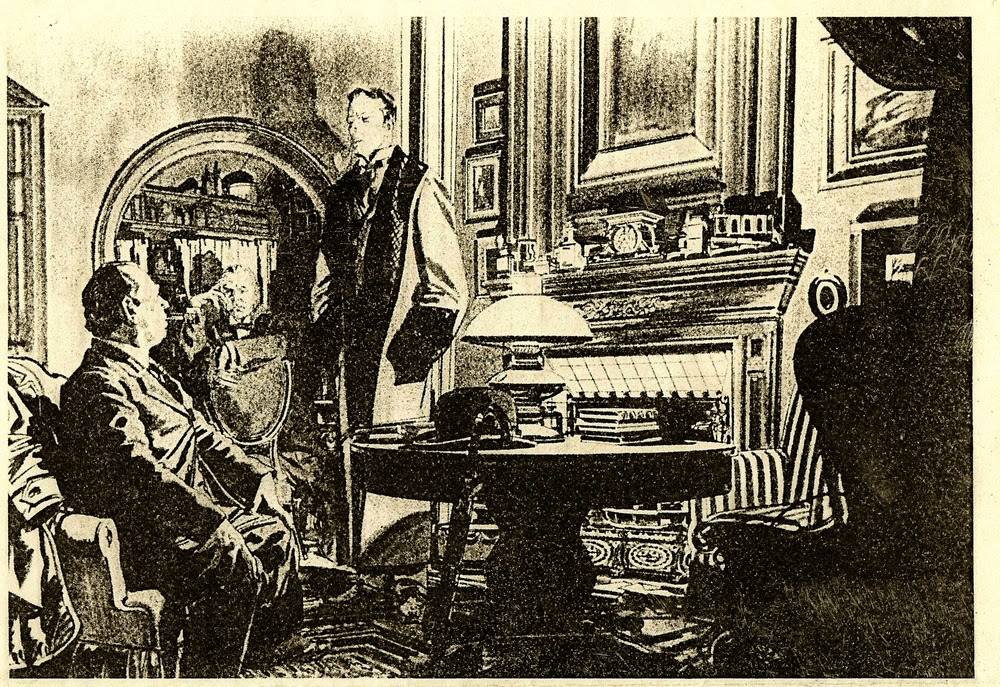 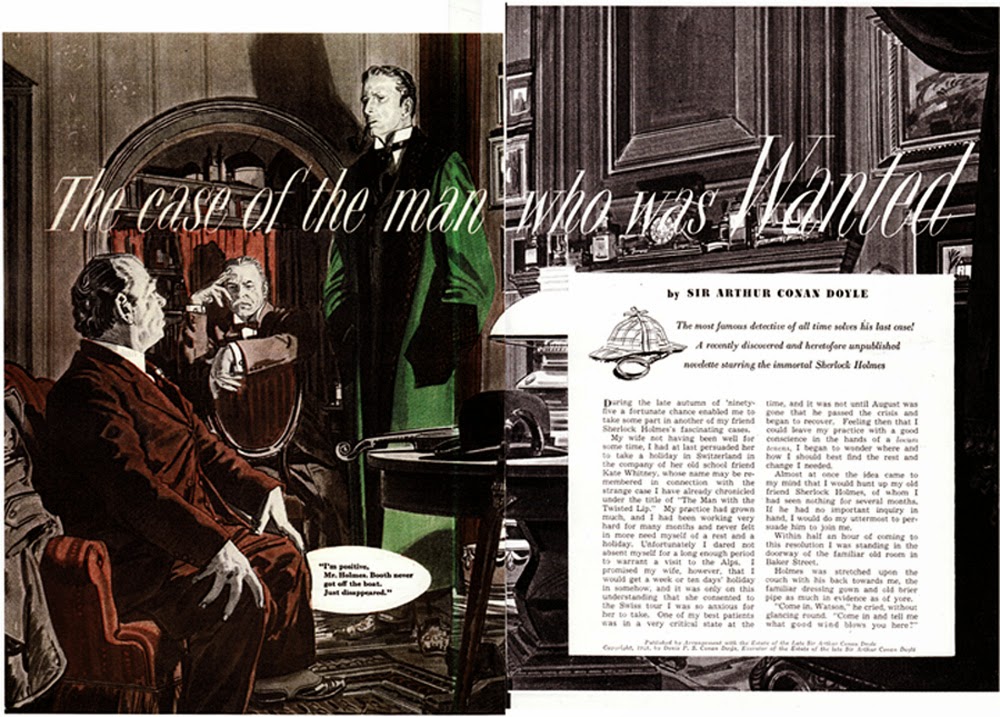 Fawcett did this story for Cosmopolitan. It was received so successfully that when Colliers signed on to do the series, he was immediately contacted to do more illustrations for the stories. 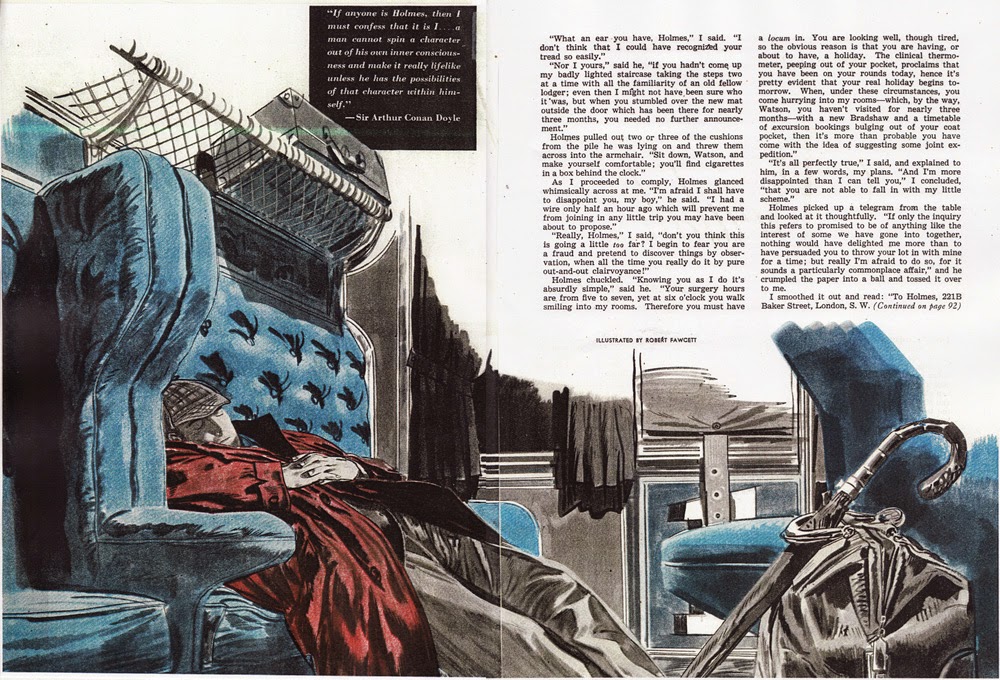 Those below were part of the Collier's run. For the opening story, The Black Baronet, a frontpiece was also created besides the main illustration. 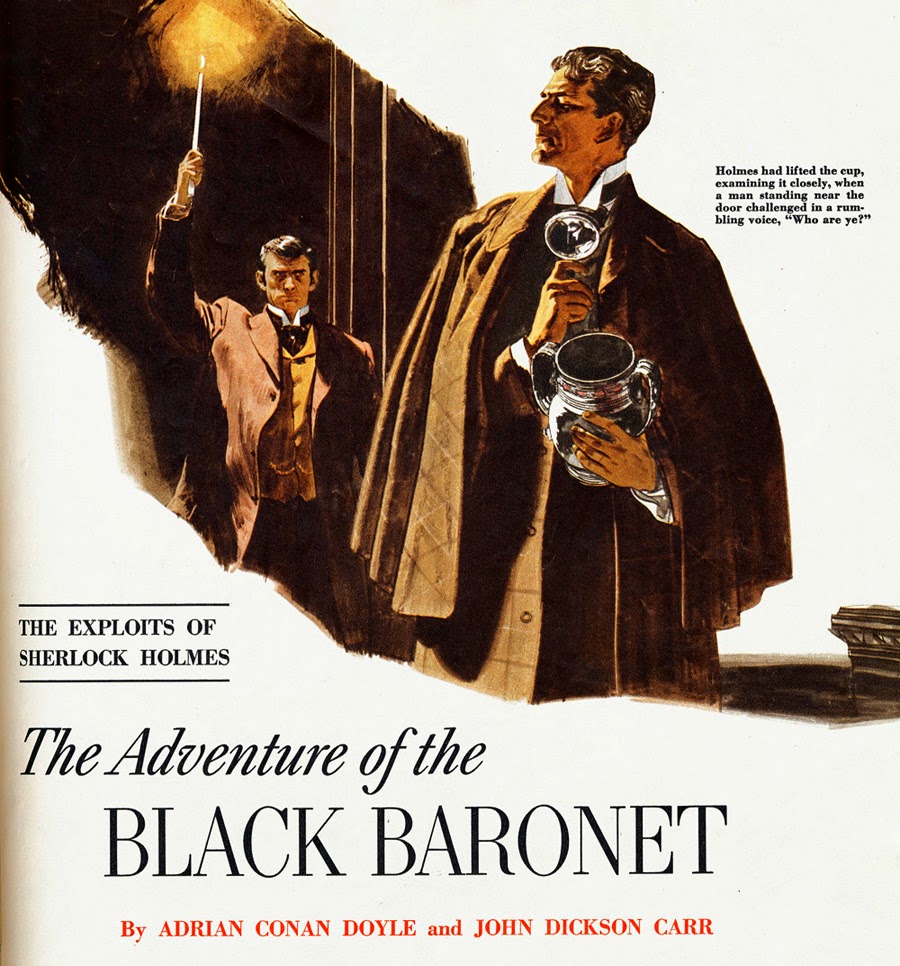 For those of you interested in more of Robert Fawcett's magnificent work, there is an excellent book available throught Auad Publishing....and check out his newest publication on the other Hall of Fame illustrator Al Parker. (http://www.auadpublishing.com/)

See you next week,
Best,
Mike